First Quartile Consulting (1QC) has surveyed utility crew productivity practices as part of its annual questionnaire for the past five years. One of the factors for improving productivity is scheduling the right size crew for the job-part of the overall important role played by the planning and scheduling function.

In a post-survey analysis, the most important finding was the number of trips to job sites. Crew sizes reported for the various scenarios varied greatly. For some of the companies, especially electric-only utilities, developers or contractors perform much of the trenching and civil work. Other utilities use specialty or contract crews for pole delivery and pole setting.

Benchmarking comparisons are worth exploring for an individual company, but 1QC’s experience shows that many other factors go into determining the right size crew: safety requirements, equipment, union rules, skill sets, use of apprentices, role of “working” crew leaders, job mix and travel distances.

Figure 1 shows the number of companies that send different size crews for each scenario:

A few data points were omitted. One company reported a one-person crew who acted as inspector for contractor crews. Another company reported the cumulative number of employees who went to the job site (an interesting benchmarking number but not consistent with other reporting).

The survey also asked for employee classifications. The typical larger crew had a mix of journeyman, apprentice, working foreman and other. None reported nonworking foreman. This information might be useful to a company that wants to know why its crew sizes are different than other companies’ crew sizes. 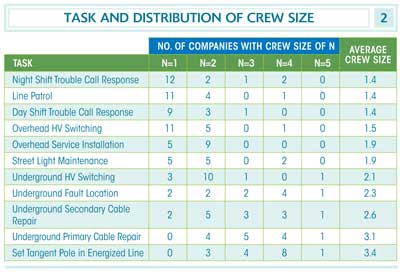 Going down the chart, the average crew size increases with job complexity, although there are variations among companies. The tasks at the top tend to have one-person crews, those in the middle have two-person crews, and the largest tasks have three- or four-person crews. The same caveats about differences in work done by developers, contractors and specialty crews still apply. A company could use this table to identify where its practices differ from other utilities’ practices.

The survey also asked for types of vehicles assigned to different job types for all the scenarios and the broader list of tasks. The detailed results of the four scenarios illustrate the range of practices, equipment types and nomenclature received. A significant difference was whether companies reported using diggers, backhoes or both. Based upon conversations with selected companies, it appears the companies that did not report diggers and backhoes relied on developers or contractors to do the work. These tended to be the electric-only companies as shown in the first column. The detailed results for the scenarios are shown in Table 3. The detail for additional tasks is available but not reported here. 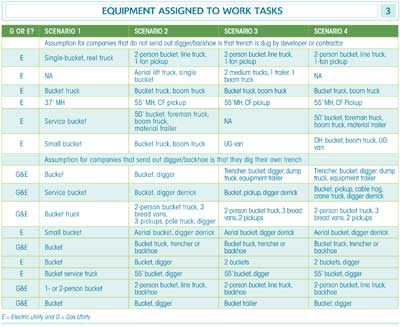 Table 4 shows the types of equipment being sent to the job site for each scenario. A company different than the norm might investigate differences in practices. One key driver is the use of developers of contractors to do the trenching work. Another area to investigate is the number of trips and timing of specialized crews or pieces of equipment for trenching and material delivery.

The survey was designed to find the answers to “What’s the right number of people?” and “What’s the right type of equipment for the job?” There isn’t one right answer. Variables include whether the company relies on developers or contractors to do the trenching; whether equipment is delivered to the job site; and how safety concerns affect staffing decisions. This crew size and assigned equipment analysis is valuable to companies that are interested in exploring their crew practices and evaluating their positions compared with peers. If a company’s typical crew is wildly outside the norm, then that is a flag to look for an opportunity for improvement.

Tim Szybalski is a director at First Quartile Consulting, a management consulting firm that performs consulting and benchmarking services across electric transmission, distribution and customer service for North American utilities. Szybalski’s career includes more than 25 years of consulting to utilities and more than 15 years working as an engineer and manager for SDG&E and PG&E. He has a bachelor’s degree in industrial engineering from Stanford University, a master’s degree in operations research from University of California, Berkeley and a MBA from San Diego State University. Reach him at tim.szybalski@1qconsulting.com or visit www.1qconsulting.com for more information.