Big Sandy Rural Electric Cooperative (RECC) is a small utility, but size does not limit the co-op’s technology integration and data management.

Big Sandy RECC is a rural distribution cooperative of 42 employees in the rugged Appalachian region of eastern Kentucky. With some 13,200 customers served from nine substations, Big Sandy RECC has a vast, mountainous territory and a physical plant of about 29,000 poles on 950 circuit miles of overhead and 10 miles of underground 13.2-kV construction.

Like utilities of all sizes, in the past Big Sandy RECC struggled to keep asset records updated and accurate. After implementing an advanced metering infrastructure (AMI) system, utility leadership recognized the revolutionary improvements to business practices, accounting accuracy and revenue protection benefits and wanted to modernize their business practices in engineering and operations, as well. Then, after two huge storms caused massive damages to utilities across the state, the Kentucky Public Service Commission recommended that all utilities under its jurisdiction acquire an outage management system (OMS).

That recommendation became the catalyst for Big Sandy RECC to determine it needed to implement an OMS. So starting with the endgame of an OMS in mind, Big Sandy RECC set out to create a plan.

Utility leadership quickly determined there were many questions they needed to answer before starting to collect data on the first pole. Because Big Sandy RECC wanted to do the GPS inventory in-house and recognizing that GIS and OMS touch multiple people and systems, they needed to create an overarching plan to guide them. 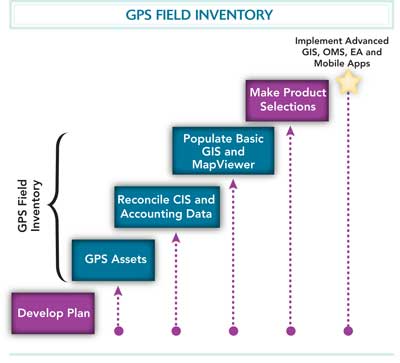 The utility set out to determine the milestones and create a comprehensive plan to guide the GPS inventory data collection and subsequent technology selections and implementations.

Big Sandy RECC’s general manager understood this and supported the plan, and the utility team was committed to seeing it succeed.

The utility focused on creating a strong foundation on which to build the system. The team focused heavily on data quality. They created a data dictionary to guide fieldwork and facilitate consistency in the data.

For example, the pole numbering and asset collection focused on high-quality attribute and geolocation data as opposed to high-end GIS features. Also, phasing was intentionally omitted as an initial requirement of the GPS inventory because the entire system could be accurately re-phased with AMI data upon completion, assuming that the customer locations in the GIS are accurately linked to the customer information system (CIS).

They planned for the GPS data collection and basic GIS functionality to be as simple as possible for the field crews to limit data errors. Realizing that many staff would need easy access to the systems to help in the data cleansing, reconciliation and integration throughout their other systems, they deployed an easy-to-use map viewer with basic GIS functionality. The basic GIS concept allowed Big Sandy RECC to reap early benefits from the GPS inventory data. The utility maintained the basic GIS until the GPS field inventory was completed.

Big Sandy RECC made sure that the data would be easily transferrable into the new systems. This approach kept the spending for the project as low as possible and let some newer offerings in advanced GIS and OMS technologies mature while the GPS data collection proceeded.

To succeed with this plan, Big Sandy RECC needed to follow industry best practices and create some of its own. Because the inventory was critical and data quality was at the forefront of the project, the utility dedicated resources to GPS inventory and the GIS and OMS implementations and maintenance.

Big Sandy RECC used in-house staff qualified to undertake a system inspection who were able to inspect and make repairs to the system in real time. For example, during the GPS inventory and inspection of the system, utility staff discovered: broken crossarms; cracked and broken insulators; frayed, slack or missing guys and guy guards; dangerous or inadequate conductor clearance issues; damaged or inadequate poles; and faulty equipment.

The utility was conscientious of even the smallest details of the plan. Utility workers purposefully thought through the pole numbering and tagging process to allow for immediate location of poles and quick dispatch.

They also put the customer location ID on the meter bases to allow for an immediate and automatic link from the GIS (and OMS) into the CIS. If there was an error in the link from the CIS to GIS, it was recognized and fixed immediately to map the correct customer in the CIS to the correct GIS meter base. This allows the CIS to be the system of record for the meter and provides a link to the GIS for the critical additional spatial component of customer location to be paired with the relevant account information required to effectively operate the OMS.

The utility followed best practices for GIS work processes. Instead of delaying work orders, employees created a process to put them in the GIS system as the GPS inventory progressed and processes for after the more advanced GIS went into service. Throughout the project, utility workers defined data processes and made GIS central to the new work and service orders, as well as right of way maintenance, engineering, work assignments, system planning and asset management.

Finally, Big Sandy RECC recognized the importance of GIS and OMS data to customer service representatives and the whole organization. For instance, the new engineering analysis model developed from the GIS was more accurate, which improved protective device placement and coordination, as well as capital dollar planning.

After an ice storm hit the area, FEMA aid and restoration efforts were greatly affected by the new OMS and GIS. Membership outage reporting was tracked and accurate. Because Big Sandy RECC had done a thorough GPS inventory and used a planned approach with pole tags, the utility was prepared. FEMA had easy access to the accurate location and inventory of damaged facilities, resulting in straightforward FEMA reporting and verification.

As another GIS benefit, Big Sandy RECC had success cleaning up idle transformers and outdoor lights and services. Its approach was to capture idle transformers, services and lights in the GIS and disseminate the information to the appropriate crews. That way, the issues could be addressed while working nearby jobs.

One challenge Big Sandy RECC faced throughout this project was balancing tradeoffs. For example, the utility could have accelerated the GPS inventory time frame and realized the advanced GIS and OMS sooner, but there would not have been the as-you-go data cleansing and reconciliation with other systems or pole and line inspections and repairs. Plus, hiring outside resources for an accelerated schedule might have cost up to three times more and not enabled the internal staff to learn new processes as easily.

The utility also could have converted existing maps into the GIS to accelerate the inventory, but Big Sandy RECC had little confidence in the data and chose not to use it. Further, dedicating more time educating the entire organization about the project and use of the systems might have allowed for an immediate implementation of advanced GIS with earlier benefits but at an increased cost.

At the end of the project, Big Sandy RECC digitized the customer grid to create more consistent customer numbering. This could have been done at the onset of the project, but initially Big Sandy RECC was not sure of the accuracy of the customer grid and if the grid system needed to be overhauled or replaced. Later, the utility discovered it was usable and could be digitized cost-effectively.

Finally, Big Sandy RECC could have done more to keep the board engaged and explain GIS and OMS in a more tangible way; the systems are hard to conceptualize for those unfamiliar with them.

A good example is to use a familiar analogy. For instance, paper outage tickets and sticky notes of customer calls during an outage are similar in practice (yet a whole lot less organized) than the old process for self-reading meters and using meter card files. It’s hard to not accept that CIS and AMI were good replacements for the old meter cardfiles and customers’ self-reading their meters.

Big Sandy RECC has deployed mobile map viewing and limited off-line editing of its GIS data. At the time of initial deployment, mobile communications were weak in the service territory, and the mobile computing deployed had to be enabled in a network-disconnected viewing and editing environment on laptops and PC-based tablets only.

Big Sandy RECC expects to take advantage of greater mobile communication network coverage. One item that the utility sees as immediately attractive is mobile OMS and automated vehicle location so field employees can see the same thing the dispatcher sees in the main OMS application and understand where everyone else is working. This has several advantages; one of the most important is that of safety enhancement for fieldwork and more efficient dispatching and work scheduling.

Big Sandy RECC is pleased with its GIS and OMS systems. It’s not the size of the utility that matters but the commitment to the plan, high-quality data and collaboration that create a successful system.

David Herron is a utility systems consultant and project manager at Leidos Engineering. With nearly 20 years of experience, he manages utility data projects and guides utilities in strategic planning, procuring and training for technology projects, including work and asset management, GPS, mobile applications, modeling, GIS and OMS. Reach him at david.c.herron@leidos.com.

Nathan Frisby is the GIS-OMS administrator and head dispatcher at Big Sandy RECC. He has 24 years of experience at Big Sandy as an apprentice lineman, serviceman and staking engineer. Reach him at 606.789.4095 or nfrisby@bigsandyrecc.com.