Executives at Brazilian electric utility Light Serviàƒ§os de Electricidade S.A. (Light SESA) recognized that a smart grid wouldn’t be so smart if it couldn’t meet the needs of its customers, society and the utility, itself. Plus, a smart grid would need to provide tangible benefits to them all. Problem was, the utility needed to figure out its customer demographics and what motivated their electricity use and conservation.

The electric power distribution company Light SESA is one of three Light S. A. subsidiaries. The other two are Light Energia, which is the generation arm, and Light Esco and LightCom, which provide electric power commercialization and services.

Light SESA distributes energy to 31 cities in the state of Rio de Janeiro. The territory includes more than 10 million diverse people, or two-thirds of the 16 million people who live in the state.

Light began a $19 million smart grid research and development program in 2010, said Fabio Toledo, the utility’s chief technology officer. The program consists of five projects designed to enable smart grid adoption in a “corporate, complete and massive way,” Toledo said in a statement on the project submitted to Powergrid International.

The project introduced many challenges:

“It is a unique program covering everything from research to production design to the release of the products on the market,” Toledo said. “Dozens of patent applications were made, and Light expects making more of them up to the end of the program.”

Light conducted extensive studies, including qualitative and quantitative research, focus groups, spontaneous feedback and the use of effective methodologies, Toledo said. Based on those, visits to the Light call center and customer service centers and other analyses, researchers used the personas method developed by pioneer software developer Alan Cooper, which takes into account statistical and ethnographic data to produce target-audience models. Using this method, researchers produced a model of 10 profiles of customers with different life stories, sociocultural characteristics, motivations and degrees of technological savvy (see sidebar). Those profiles guided design staff on the products and services developed. As a result, the smart meters developed for Light’s project are connected to whichever medium a customer is most familiar, such as TV, social media, (Facebook, Twitter), Internet and mobile phone. Light customers in the pilot, including those with special needs, can track their electricity consumption from anywhere on the planet, Toledo said.

“The products and services developed were already installed in a controlled environment and will be progressively available in the premises for customers’ participating in the pilot project, enabling people to learn and adapt gradually,” Toledo said.

Besides the interaction channels, the smart meters developed work with the smart display. The smart display information is presented in energy, monetary values and carbon dioxide emissions on a daily, weekly and monthly basis, with cumulative and forecasted information displayed on graphic and text formats. Customers also may set consumption targets and receive alerts. From the possibility of adopting different tariffs, the smart display takes on an important role in presenting tariff information, enabling customers to decide on the cost of the energy they will consume and allowing them more control of their household budgets. The meters also can interact with water and gas. All interactions, products and services were planned in accordance with privacy and confidentiality principles, Toledo said. The meters are interoperable and interchangeable and use advanced information security techniques to ensure the fidelity and inviolability of the data, such as digital certification, offering security and a legal framework for the communication and recording of metering data. Each kilowatt-hour added to the meter is digitally certified, as well as every data transmission.

“They are probably the most secure meter worldwide,” Toledo said.

A whole family of meters has been developed: single-phase and poly-phase, pole- and wall-mounted, socket and traditional base and compatible with all smart grid applications (e.g., the same meter is used in the utility’s PHEV charging station). They include all the data required by the Brazilian electricity regulator, such as frequency registration and duration of interruptions, recording of the duration of voltage deviations and billing units. The meters also can be configured remotely to operate in pre-payment mode.

Energy balance meters also were developed. They measure the energy balance by phase and can monitor the power distribution transformer temperature. The meters can detect violation, hacker attempts of invasion and other illicit acts.

“The tamper-detection accuracy of this system is probably the best in the world,” Toledo said.

The meters also have longer longevity, reduce maintenance and communication costs and cost less than similar solutions in the market.

Light’s smart metering program is a success, Toledo said. The topic has received more than 200 positive mentions in the press, including major TV channels. In addition, the U.S. Trade and Development Agency invested $350,000 in the program. The agency’s first investment with a focus on smart grids in Latin America demonstrates that the U.S. government supports Light as a partner in smart metering and smart grid technologies, Toledo said. 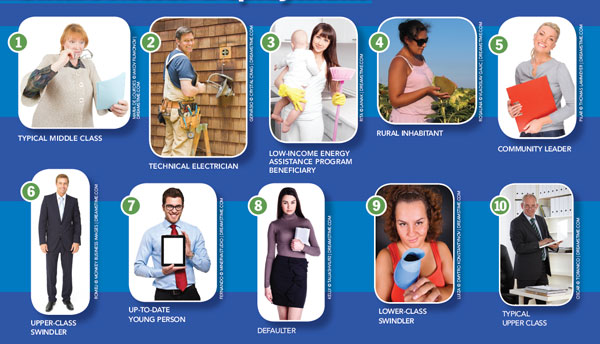 Motivation: Interested in knowing how the new meter works so she can continue controlling her expenses. Unsure if she’ll know how to use it or be able to see the numbers.

“- Lives with son and daughter-in-law, who recently had a baby. Went to the power company office with her son to complain about her bill. After talking to the clerk, she realized her consumption increased after the baby’s arrival.

“- Consumes about 150 kWh. Has one electric shower, a microwave and an air conditioning unit.

“- Watches TV and uses cell phone to talk to her son.

Motivation: Very interested in mastering this new technology. Thinks it’s important to understand how smart meters work so he can explain it to customers and not lose business.

“- Well-known and respected in the community. Provides complete, standardized services, even relays customers’ requests to the power company. Has thorough knowledge of procedures and is very familiar to all customer service employees.

“- Uses his cell phone and the Internet extensively to perform services for customers.

Wants to keep her bill low to stay in the program and wants to explain this to her children.

“- Lives in the outskirts and works a few hours a week as a maid in the swanky upper side of the city. Beneficiary of government family aid program. Received letter to bring her family aid card to the power company’s office to continue participating in the low-income energy assistance program. Has school-age kids. Lives in a flimsy residence with one-phase electric power. Already lost her right to participate in the energy assistance program once because of excessive consumption. Does her best to get her children to understand, but they forget the lights and leave on the TV.

“- Doesn’t spend much on power because she’s afraid of being excluded from the energy assistance program.

“- Loves watching TV and uses a pre-paid cell phone a lot. Is learning to use the computer at the community center and plans on buying her own one day.

Has heard that her power meter is going to change and is worried she won’t know how to use it. Asked her son, who visits once a week, to help her use it.

“- Married to a caretaker of rural property in upstate Rio de Janeiro, who, like herself, has little schooling. At husband’s request, she handles all dealings with the power utility on behalf of the account name holder—the property owner. The property has only one meter, installed in the landowner’s home.

“- Their boss pays the bill, but if consumption spikes, he complains.

“- Has a radio, watches TV and uses a cell phone to talk to her son.

Wants to learn how the new technology works so she can teach her community and encourage them to save power.

“- Consumes up to 100 kWh. Has air conditioning and natural gas water heater.

“- Teaches at the city school and is very well-known and respected. Always organizing community projects and bazaars. Concerned about the environment.

“- Spends as little as possible at home and teaches her students and those around her to do the same.

“- Uses TV, cell phone with text messaging. Has a computer, but still not very comfortable using it.

“- Lives with his family in an upper-middle-class home and is the electric power account name holder. Bought a fraudulent account from a “supplier,” sure he could get away with it because of his influence.

“- Never bothered to save electric power because he never pays for it.

“- Accesses information on the Web and smart phone. Not fond of TV.

Sees the change in technology as an opportunity to save on his bill. Interested in having an advanced display to understand how it works.

“- Consumes between 100 and 200 kWh. Has air conditioning and a natural gas water heater.

“- Recently married. Saves all he can to invest in the stock exchange. Wants a sizeable nest egg by the time he turns 40.

“- Not concerned about consumption because his electricity expenditures are modest.

“- Very into technology. Owns an iPad, notebook and smart phone and is always connected.

Wants to learn how to use electricity more efficiently and not fall behind on payments again.

“- Consumes around 100 kWh. Has air conditioning.

“- Federal scholarship grant helped her get a college degree and a better job. With the added income, she bought appliances in installments. One of her purchases was an air conditioning unit, which increased her power bill substantially and forced her to upgrade to two-phase electric power. Her friends say nobody should have to pay for electricity.

“- Behind on her light bill, negotiating outstanding payments with the power company.

“- Watches TV a lot, uses her cell phone for texting and a computer at work.

Doesn’t understand the new technology but afraid she won’t be able to pay her bill. Seeking alternatives to cut her spending.

“- Consumes between 100 and 200 kWh. Uses hair dryer and flat iron on customers.

“- At husband’s suggestion, bought fraudulent account from a “supplier” to make ends meet. Wants a bigger TV. Received an irregular connection notification and is scared stiff.

“- Has no idea how much she spends, but knows she could never afford to pay for it.

Not very interested in the change. Curious about the new technology but hopes it won’t be much of a bother. Interested in home automation.

“- Age 57, owner of a chain of gas stations, college graduate.

“- Close to retirement and lives with his family in a high-end apartment. Appreciates comforts of life and never bothers himself about expenses.