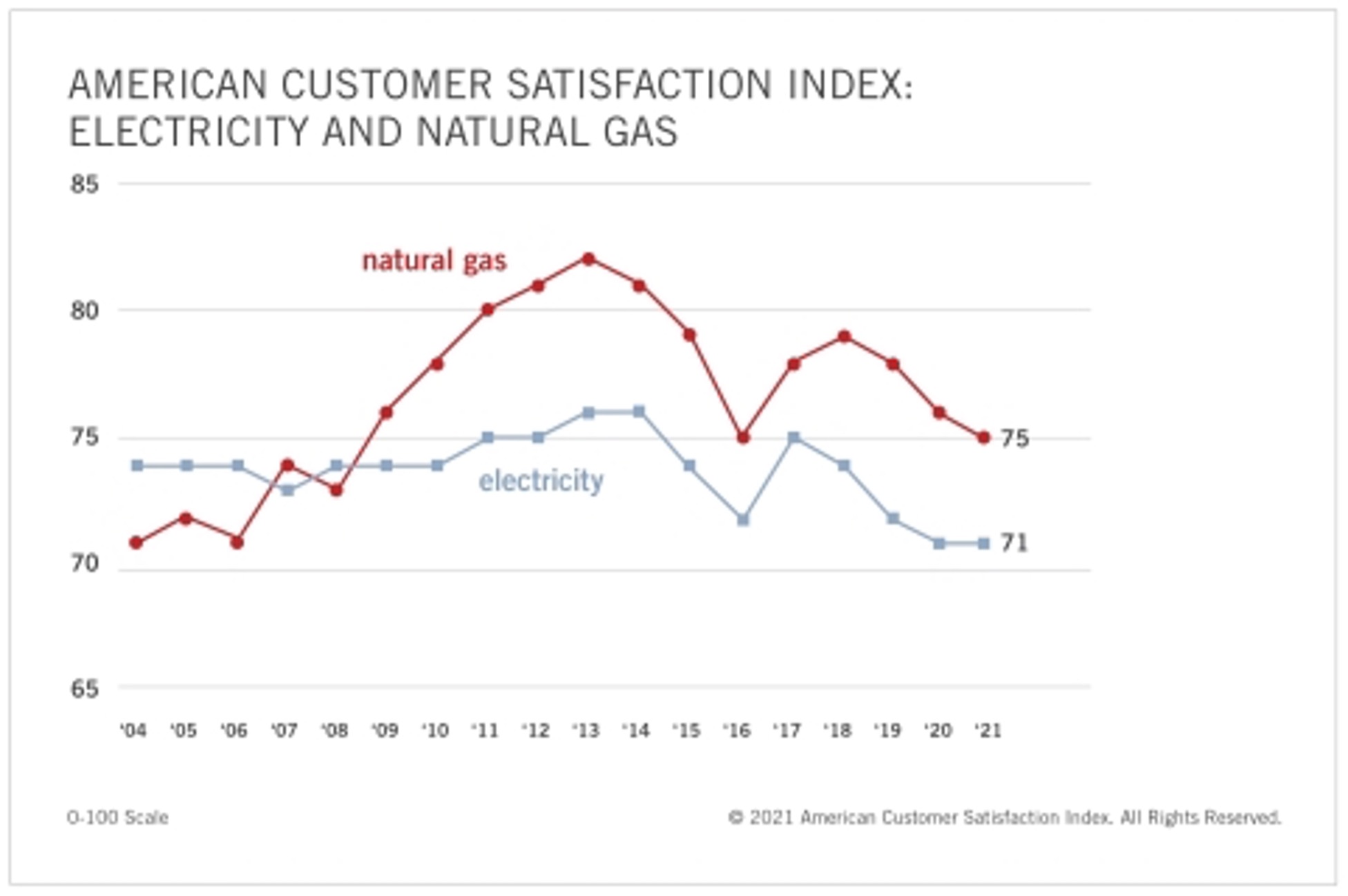 Household power consumption surged during the pandemic, but customer perceptions of utilities barely budged. That’s according to the American Customer Satisfaction Index (ACSI®) Energy Utilities Report 2020-2021, which was released on Tuesday.

Natural gas service retreats for the third straight year, declining 1% to 75, but still outperforms electricity, which remains unchanged at 71, a record low point since 2004, according to the company.

“The recent extreme storms and resulting blackouts in Texas occurred after ACSI’s interview period ended, but shined a harsh spotlight on the need for reliable electric service,” says David VanAmburg, Managing Director at the ACSI.

“Customers interviewed throughout 2020 note that overall quality and reliability of electric service have diminished compared to 2019. Perceptions of value, however, are stable or slightly improved. Some might view higher bills during the pandemic as a tradeoff to savings in commuting, travel, and restaurants during lockdown. Another factor might be the shutoff moratoria that allowed residential customers to defer utility payments without threat of losing service.”

After two years of customer satisfaction decline, the investor-owned energy utility industry overall holds steady with an ACSI score of 72, continuing to match its record low from 2016.

The trio of leading utilities in 2021–Atmos Energy (down 3%), CenterPoint Energy (down 1%), and NextEra Energy (unchanged)–are tied with ACSI scores of 76. This represents the lowest leading ACSI score for the industry over time.

NiSource and Southern Company are steady at 75, a score that remains an all-time low for the latter, while PPL edges up 1% to 74.

Of the six energy utilities that match the industry average of 72, four (Entergy, Exelon, FirstEnergy, and Xcel Energy) are stable or within a point of their prior score. Two, Edison International and Sempra Energy, slide 3% and 4%, respectively.

At the bottom of the industry, Eversource Energy tumbles 6% to 65 and beleaguered PG&E, which emerged from bankruptcy in 2020, drops 3% to 61 after plummeting 10% one year ago.

To enhance understanding of the residential customer experience, the ACSI now measures mobile app performance across the energy utilities sector. The investor-owned category receives its top customer experience marks for both mobile app quality and reliability (79). Relative to most other ACSI industries, however, energy utility apps need to improve as all three categories score below average on these measures.

Customer satisfaction with municipal energy utilities overall sheds 1.4% to an ACSI score of 71 following two years of slow decline. Perennial industry leader Salt River Project stays atop the category, but wanes 3% to a record low of 75.

CPS Energy edges closer to Salt River Project with a 1% uptick to 73. Smaller municipal energy utilities inch down 1% to 71. After tying with CPS Energy and the smaller providers one year ago, the Los Angeles Department of Water & Power (LADWP) plummets 6% to 68.

Touchstone Energy drops 1% to a customer satisfaction score of 73, continuing a four-year ACSI decline. The group of smaller cooperatives gains just a point to tie with Touchstone at 73 following a steep decline the prior year.

With fewer resources to provide robust apps, smaller rural utilities earn a mobile app quality score of 77. This places them at the bottom among all ACSI industries, along with the poorly performing subscription television service industry.

The ACSI Energy Utilities Report 2020-2021 is based on interviews with 21,736 residential customers, chosen at random and contacted via email between January 13 and December 28, 2020. Download the full report at this link.