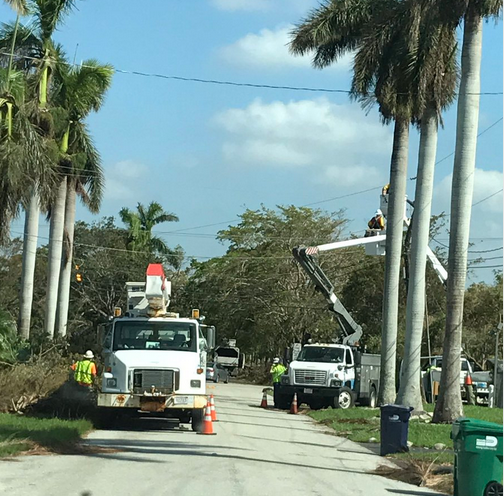 Florida Power & Light has narrowed down the massive outages caused by Hurricane Irma and now is working from neighborhood to neighborhood more than a week after the most intense Atlantic storm to hit the U.S. in 12 years.

“At this point in the restoration, we are nearing the finish line and focusing all of our efforts on the localized level,” the utility recorded in its website blog. “We have finished restoring the main lines that provide power to your location and are now going into neighborhoods— and in some cases going house by house. This means we are actually going deeper into the hardest-hit communities.”

The last part of the restoration, the utility pointed out, is the most time consuming so asked and thanked customers for patience.

More than 20,000 workers from all over the nation and Canada traveled south to help with restoration efforts in Irma’s devastating wake. More than 6 million customers overall lost their power.

Georgia Power has restored power to 99 percent of its customers impacted by Irma, or nearly 1 million, according to the company’s Facebook page. In fact, the utility’s outage map indicated that less than 200 customers were still waiting for reconnection.

Duke Energy worked to restore power to about 1 million customers in Florida and North and South Carolina. The utility has to replace more than 3,000 poles and nearly 1,000 miles of wire brought down by the storm.

Many customers complained, of course, but Irma’s path was the roughest to hit U.S. landfall since Hurricane Katrina in 2005. Utility officials have warned that months of work to rebuild the grid will follow the quick fixes to restore power.

Irma killed more than 80 people in its path from the African coast to the U.S. mainland. More than twenty of those deaths were in the U.S., including eight who died in a Hollywood, Fla. nursing home which didn’t have air conditioning after the power was cut.