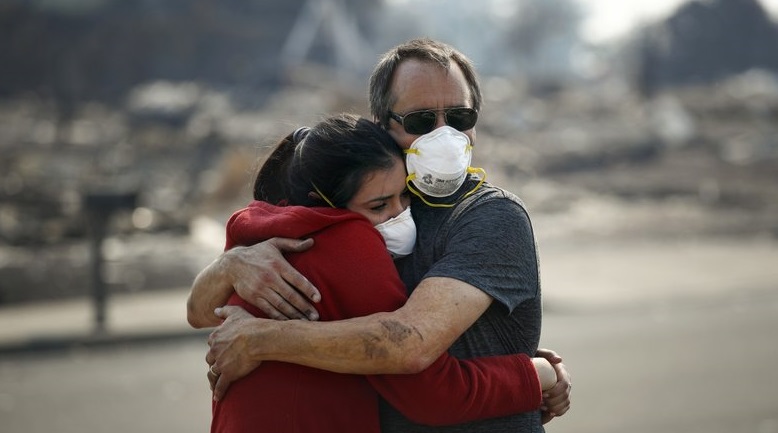 (A man hugs his daughter after surviving the northern California wildfire racing through their neighborhood earlier this month. AP Photo)

Pacific Gas & Electric crews have restored power to 97 percent of customers who suffered outages during the most recent northern California wildfires and has been granted access to most of the remaining powerless areas.

The utility reported Tuesday that CAL FIRE has granted it access to an additional 6,000 homes and businesses, leaving only 400 which are still inaccessible. PG&E expected to restore power to all of those 6,000 by Wednesday or Thursday, at the latest.

More than 4,300 employees and mutual-aid partners have been working on restoration efforts since October 9. The wine country wildfires have killed 31 people, making them the deadliest in California history, according to media reports. Thousands of homes and other structures were damaged or destroyed in the blaze, while crews were forced to battle new fires in Sausalito and Santa Cruz as late as Tuesday.

As of late Tuesday, there were about 10,500 electric customers without power in the fire-impacted areas.

PG&E crews will remain active in Sonoma and Napa Counties as they make the necessary permanent repairs to the company’s gas and electric systems, according to the San Francisco-based utility’s press release.

Through Wednesday, PG&E gas service representatives and those from other Western utilities will continue restoring service to the remaining 11,000 customers who do not presently have gas service, but are in a position to accept gas service. This process involves working with the individual customers to relight their pilot lights. Restoration begins once infrastructure is repaired, and areas have been deemed safe by relevant authorities.

In all, as a result of the firestorm, more than 359,000 customers lost electric service and more than 42,000 gas customers had their gas service turned off. We took this action with safety first in mind to protect our customers and our communities.

The cause of the wildfires is undetermined, although some suspicion has rested on PG&E power lines allegedly brought down by gale force winds. A suspected arsonist, however, was arrested in Sonoma on Sunday, according to news reports.

PG&E has also deployed autonomous aircraft, or drones, to assess damage to infrastructure.

“These drones represent an evolving technology that will only provide greater value and enhanced safety into the future,” said Ned Biehl, PG&E director of aviation services. “As we continue to support first responders and other agencies involved with this emergency response, this technology will enable a safer restoration process.  This project is testament to our Mission, Vision and Culture, fostering innovation and collaboration to serve our customers.”

During the wildfire response, four teams have operated multiple morning flights over the fire zones north of the company’s Santa Rosa base camp and near the Napa base camp, capturing videos and still images of PG&E equipment.

The team of four includes a pilot and an observer or “co-pilot” from the drone vendor, a subject matter expert, who reviews the impacted facilities, and a safety officer, who ensures that the public is safe during the drone’s flight. The information collected is shared with the base camps in Napa, Sonoma, Mendocino and Lake Counties and in the Emergency Operations Center in San Francisco to help in PG&E’s efforts to restore service to its customers and rebuild its infrastructure.