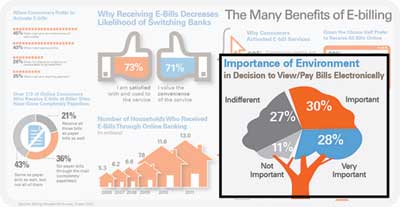 Going green is of ongoing importance as consumers increasingly seek businesses that employ environmentally responsible practices. Many environmental initiatives, including the delivery of renewable energy and the reduction of carbon emissions, are high-level, long-term goals. Utilities, however, should not overlook another green technology that resonates with consumers: electronic bill payment.

According to PayItGreen, a collaborative initiative among financial institutions, financial industry service providers and businesses, the environmental impacts of choosing electronic payments, bills and statements can be significant. If 20 percent of U.S. households switched from paper to electronic bills, statements and payments each year, the collective impact would:

Consumers know that paying bills online is a way to reduce their impact on the environment. The annual Fiserv Billing Household Survey consistently has shown that more than half of consumers who choose to receive or pay bills online said that the importance of the environment was a factor in their decisions. Most cite saving paper and saving trees as the top benefits, followed by saving landfill space, reducing inks and chemicals used, and reducing pollution from deliveries and paper processing.

Online bill payment has become the norm among online households, with 73 percent of those who access the Internet at least once a week now paying at least one bill online each month. And although simply paying bills online can have a positive environmental impact through the reduction of waste and pollutants associated with mailing and transporting paper payments, convincing consumers also to receive bills online in the form of paperless e-bills can multiply the benefits by eliminating the production of the original paper bill altogether. E-bills contain the same information as paper bills but are delivered through a company or financial institution website.

Beyond the benefits for the environment, promoting adoption and usage of e-bills can provide significant benefits for companies. E-bill usage has a positive effect on customer relationships. Thirty-seven percent of consumers who receive e-bills said it improved their relationship with the companies from which they received e-bills.

So how can utilities promote adoption of e-bills? Increasing consumer awareness by enhancing the visibility of the e-bill option on the website is critical, as is overall marketing of the benefits of e-bills. According to the Fiserv Billing Household Survey, consumers prefer to activate e-bills when they set up a new online account (45 percent), when they start paying online (43 percent), when offered an incentive or a sweepstakes entry (28 percent) and when they set up a recurring payment (25 percent). E-bill users report the top benefits are the “click and pay” convenience, the elimination of paper clutter, and the saving of paper and energy. Companies that have created awareness about e-bills, including how to sign up for them and the benefits that can be achieved by using them, have seen significant increases in usage.

According to the 2012 Fiserv Billing Household Survey, payments initiated via a mobile device such as through an app were made by more than 8 million U.S. households. Growth was most notable among smart phone owners; mobile bill payments among this group jumped 41 percent during the previous year. In addition, 1 in 5 tablet owners paid a bill through a company or financial institution site using their tablets. When asked what mobile billing and payment capability they are most interested in, nearly 1 in 3 respondents indicated they are very interested in viewing and paying bills from their smart phones. Among respondents interested in paying bills at a company or financial institution site through a tablet, 48 percent said doing so would make them more likely to turn off paper bills in favor of e-bills. Features such as payment reminders delivered to mobile phones via text message also help utilities overcome concerns customers might have about giving up their paper bills, such as forgetting to pay bills.

Offering e-bills for delivery through financial institutions provides an additional opportunity to meet customers where they want to transact. Companies that have offered e-bills to customers at their financial institutions for a 90-day introductory period as part of the eBill Easy Activation program from Fiserv have seen nearly 1 in 5 customer participants turn on e-bills and turn off paper bills for good.

Consumer adoption of electronic bill payment and e-bills through company and financial institution channels is good for the environment and benefits utilities and consumers.

Eric Leiserson is a senior research analyst at Fiserv, where he is responsible for the development of consumer-related electronic billing and payment research, adoption strategies and marketing programs. He has conducted numerous primary research projects and Webinars in green marketing, consumer segmentation, longitudinal surveys, Web usability and focus groups. Prior to joining Fiserv, Leiserson held marketing and sales positions at Unisys Corp. and Intuit.