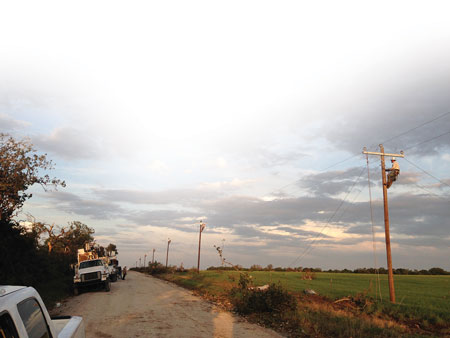 When a deadly storm ripped through northern Texas last May devastating the area with a tornado, violent gusts of wind and large hail -a guaranteed recipe for power outages-the Comanche Electric Cooperative Association in Texas needed to be ready to go into efficient restoration mode.

Thousands of residents were without power. Hail the size of oranges damaged the area, and around three inches of rain poured down.

It was an important test for Comanche Electric’s integrated outage management system. The cooperative serves approximately 8,950 members and over 17,000 meters over parts of seven Texas counties including Stephens, Shackelford and Comanche-a total service area of 110 miles long and 60 miles wide.

Over the past year and a half the co-op had invested in a new, fully automated approach. An integrated voice response system (IVR) was now in place to handle incoming and outgoing calls in many scenarios. Automated billing and customer engagement systems (BIS and CIS) were managing near-real time meter use data and displaying it visually via geospatial information systems (GIS). Operational data from SCADA now displayed in real time into the central GIS.

Questions loomed as the team rallied to address the damage, provide timely and accurate information to customers, and restore power as quickly as possible. Would it all come together?

One of the unique aspects of Comanche Electric’s new system is that it all-AMI, CIS, IVR- feeds into the same GIS-powered OMS system. Previously siloed streams of information were brought together in a calculated way. As the storm and its aftermath unfolded, the utility had visibility into outages not only across distribution lines, but all the way to the member’s residence.

“Our meters report directly into the OMS,” Eddie Strube, Comanch Electric’s operations director, said. “It definitely helped us knowing which meters were actually off, and there was no guesswork in it. It definitely aided in that process. As soon as we were able to restore a meter, we were able to ping it, and the meter was sending back into the OMS that they had powered back up. So there was no doubt about what we still had off and what was on.”

Providing operational data into the OMS map display, Comanche Electric could pinpoint problems and predict the location of fuses or breakers that opened upon failure.

“This helped the power teams prioritize their restoration efforts. Again, this eliminated a lot of the guesswork they were forced to do in the past. Mobile workforce management tools integrated into the OMS allowed Comanche’s crews to find the best routes to the outage areas so they could go out and immediately fix the problems and restore customer power.”

Communicating with customers can be challenging in the midst of outages, especially when there is a big disaster such as a tornado occurring. IVR has allowed Comanche Electric to handle calls in an efficient way, in which it knows the status of the particular customer call and can draw restoration estimates that are up-to-the-minute. It gives them exceptionally accurate information and can handle a volume of calls that might have overwhelmed a small crew of workers in the past.

“One of the things that we’re trying to implement is, as soon as we’re flagging an outage in house, we’re trying to be proactive and figure out a method to contact the member before they call us,” Strube said. “That information has been given to some of our folks, some of our members, and that’s very well-received. We have tried some of that and it works well.”

Much of Comanche’s success during major storm and outage scenarios came from the training and planning they did upon purchase and deployment of the system. After installation, Comanche brought in trainers from Futura Systems and SEDC (the family of companies that provided all the integrated GIS, OMS, CIS, and IVR systems) to gather and teach Comanche Electric workers from departments across the utility for several days.

In the following weeks, Comanche put a lot of thought into how they wanted to use the system.

“We had some challenges selecting which alarms we actually wanted to see in OMS,” Strube said. “For example, if it were a blink of a really short duration, say 3 or 4 or 5 cycles, we don’t need to see that in OMS. We had to go in and kind of tweak and try to figure out exactly what we want to see and what we don’t want to see. We’ve also been able to go back and correct some of our phasing on our system because initially we were showing outages and calling members that were not actually out. We’ve been able to correct our model with that as well.”

Whether in a disaster scenario or normal usage, there are practical principles to apply to customizing the OMS to meet consumer needs.

“There are some issues you have to work through, though,” Strube said. “You have to know what members want to be contacted on and what they don’t. For instance, if there’s a water well that’s not going to be on tonight, if the call comes in the middle of the night, you have to use a little common sense. No co-op member wants a phone call in the middle of the night saying, ‘Hey you know your water well is out. Do you want us to get it on now?’ Those were some of the challenges we’ve worked through,” Strube said.

Members have been positive in their reactions, Comanche has found. As Strube noted, “The quicker you can get the lights on, the better they’re going to like it.”

Strube said that while restoration time data is still being gathered and compiled, it is clear to everyone at the co-op that they have reduced outage times dramatically. They know they are saving money in the way they manage outage restoration tasks, Strube said.

“Our outage times are reduced considerably because we know what we have off, and once we get it back on it automatically pings to tell us if there’s anything still off. This saves us multiple trips in the field. We’re not having to ride up and down the road guessing which device is off, it’s predicting this-and it’s very accurate in what it’s predicting,” Strube said.

The integrated nature of the OMS has been an important factor in the system’s success, according to Strube. Bringing data streams together-from CIS billing, BIS accounting, engineering and the other systems-and automating their response to customer needs in tailored ways has been powerful. “The integration with the metering system through SEDC’s UPN software, all of that has been something that’s been very easy to work with,” Strube said.

The destructive storm that caused the severe power outages last May will likely not be the last weather episode Comanche Electric will face. Outages and even catastrophes are realities for which every utility must prepare. Comanche’s adoption of automated technologies has allowed them to be more responsive, effective, and prepared than ever before.

Rachel Brannon is a writer and University of Georgia graduate who provides public relations services as part of McDonnell Group Inc., an energy industry specialist agency