Continuing its quest to use 100 percent renewable energy, Apple announced that it is building an 18-20 MW solar array at its upcoming Reno, NV data center. Apple will work with Nevada utility NV Energy and again partner with SunPower, but this time it will use SunPower’s low-concentrating photovoltaic (CPV) technology.

Back in March, Apple committed to meet its energy needs with 100 percent renewable energy company-wide after growing backlash from environmental organizations.

Apple is currently in the process of completing two 20 MW solar PV plants at its Maiden, North Carolina data center, which uses SunPower technology. The Maiden site also uses the power from an onsite 10 MW biogas plant and fuel cells. 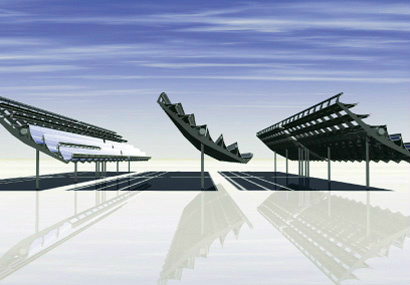 The technology being used at the Reno site is SunPower’s C7 solar concentrators. The system consists of rows of parabolic mirrors that sit on single-axis trackers, which concentrate the sun seven times onto silicon solar cells, scoring 22.8 percent efficiency. This technology is especially effective in areas of high solar insolation, and the site of the Reno project is a perfect example.

“The SunPower C7 Tracker is ideal for use in areas with high solar irradiance through direct sunlight, including Nevada, the U.S. Southwest and areas of the Middle East, Africa, Europe, Asia and Australia,” said Ingrid Ekstrom, corporate communications director at SunPower.

Apple is also taking advantage of the recently introduced green energy program in Nevada. This allows Apple to build and pay for its own solar plant, incurring all risk and costs. Apple also will have the option to expand the project, while NV Energy is able to use or even eventually buy the solar farm.

“This program allows customers such as Apple to choose to have a greater proportion of their energy coming from renewables than the law requires, without having a cost impact on our other customers,” said NV Energy CEO and president, Michael Yackira, in a statement.

The project is expected to be complete in early 2014, and the Reno site will also take advantage of local abundant geothermal power.