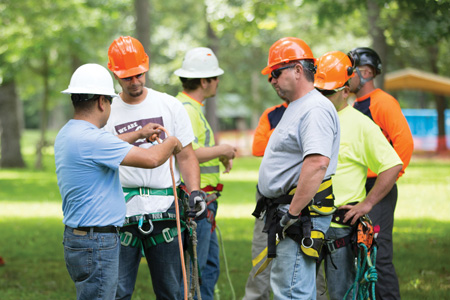 Utility arborists think about safety every day, whether consciously or not. While it might seem routine, every time an arborist straps on protective equipment, climbs a tree and does his or her job effectively, it’s because safety has been embedded into everything he or she does on a day-to-day basis.

That’s no accident. Many of those safety protocols are formalized within the ANSI Z133 standard, the driving document for safe tree-care practices for arborists. Right now, the industry is hard at work updating the standard for a new version to be published in 2017.

With the public comment period for the 2017 update to the ANSI Z133 having concluded in late March, the Z133 committee enters the process of finalizing the new updated standard. The proposed revisions can be read in their entirety at www.isa-arbor.com, but following is a breakdown of some of the most significant changes and how they’ll affect the ways utility arborists work near electrical lines.

The potential dangers of working around electrical conductors for utility arborists are well established, but there was a time when that wasn’t necessarily the case. In fact, just this past year the Z133 committee reflected on the 50th anniversary of one of our industry’s foundational moments.

On August 17, 1965, an 18-year-old tree worker named Jeffrey Hugg, earning money for his college education, was killed upon coming in contact with a primary electrical wire while on the job in Johnstown, New York. It was a textbook example of a preventable death for an arborist, if only Jeffrey had been given the proper tools to succeed.

Jeffrey’s tragic death was the catalyst for reshaping how arborists work. It was through the tremendous efforts of Ethel Hugg, Jeffrey’s mother, that the Z133 was developed. A schoolteacher in Johnstown, Ethel raised important questions in trying to make sense of her son’s death. Why had the owner of the tree company placed Jeffrey in this situation? Why was he in proximity with a high-voltage wire without formal training? Were there not some simple safety measures that could have been taken to prevent this tragedy?

In petitioning safety organizations, politicians and other decision makers, Ethel Hugg helped form a foundation for safety standards for tree-care workers. The Accredited Standards Committee (ASC) Z133 was formed in 1968. The organization went on to publish the first Z133 safety standard in 1972. The standard has evolved, growing in rules and pages, none added without reason; each can be traced to specific incidences that have caused significant injury or death to one of our own.

And, while there has been great progress, the standards are far from perfect. U.S. statistics are alarming: the country loses nearly one arborist per week due to accidental electrocution, according to 2012 findings by Xcel Energy.

Many of these accidents-nearly 25 percent-are attributable to contact with secondary, low-voltage service wires that provide households with their electrical currents. There’s a fallacy at play here that leads some workers to believe that these “low voltage” lines are less hazardous, but they carry more than enough electrical current (200 amps, generally) to cause a fatality.

All of this leads to the proposed updates in the 2017 version of Z133, which significantly overhauls the ways in which utility arborists work near and around electrical power lines.

A Continued Push for Improvement- How You Can Help

In the 1990s, I set a goal to one day be a member of the ASC Z133-and it has been a great honor being accepted by the committee. I often hear from my fellow tree workers that they have no say in the standards, but this is not true. In the back of the Z133 standard, there is a form titled, “Recommendation to Accredited Standards Committee Z133,” which encourages workers in our industry to offer recommendations of changes or additions to the standard. The committee takes the time to read each and every suggestion that comes our way.

Going home to our family and friends at the end of the day is our No. 1 job. On Aug. 17, 1965, Jeffery Hugg didn’t go home. As we look back on the efforts of Ethel Hugg and the more robust Z133 standard that is in place today, we must remember that safety is a constant, ongoing process. And that requires everyone’s help.

Major revisions have been written into the 2017 Z133 in order to ensure that arborists working near electrical lines are closely familiar with the necessary practices and precautions of working near these lines. Section 4, covering electrical hazards, sees significant additions and changes that are intended to positively impact the way arborists work near electrical lines. The incidental line-clearance arborist will be working in proximity of electrical conductors as part of his job but not for the reliability of the utility system.

New language in the standard now necessitates specific levels of training that must be provided to arborists working near electrical hazards: “Safety-related work practices to be employed shall be consistent with the nature and extent of the hazards present.” This is a shift from more general language in past editions that simply required employers to certify that each employee had been trained to recognize and was “appropriately qualified” to work within proximity to electrical hazards applicable to their assignments.

Updates affecting all arborists include:

“- New language clarifying that direct and indirect contact with electrical conductors can cause serious shock. Updates also expand the definition of items that are conductive to include “the woody parts of trees, leaves, branches, needles, palm fronds, etc.”

“- New language necessitating consideration of additional factors that may increase risk around electrical hazards, including wind, load sag and other factors affecting a line’s position in relation to the work being performed.

“- Language requiring operations near energized electrical conductors to be suspended in the event of severe weather, including thunderstorms, high winds, snow storms and ice storms.

The revised standard goes on, however, to distinguish between incidental line clearance and line clearance, drawing new requirements for each.

The minimum requirements for qualified incidental line clearance arborists revolve around their ability to properly identify and work around a multitude of electrical voltages that may be encountered when working near electrical lines. Specific requirements now include:

“- The ability to distinguish exposed, live parts from other parts of electrical equipment

“- The ability to distinguish the nominal voltage of exposed live parts

“- The ability to distinguish exposed, energized parts from other parts of electrical equipment

“- The ability to determine the nominal voltage of exposed, energized parts

The update also adds language requiring employers to verify the qualifications of line clearance arborists and also to ensure that those arborists are familiar with proper safety practices and emergency-related procedures. In addition, utility system host employers are now responsible for communicating any unique hazardous conditions relevant to affected work areas to contract arborists.

Accountability-on the part of both the employer and the arborist doing the work-is imperative. All parties involved must be sure they are not putting the wrong people into dangerous situations, or else tragedy is sure to strike more frequently.

Keith Norton is training manager with ACRT Urban Forestry Training, a division of ACRT Inc., an employee-owned utility vegetation management consulting firm headquartered in Akron, Ohio. He is also a voting member of the Z133 committee and a member of subcommittees examining electrical hazards and crane use in arboriculture.