The electricity industry is transforming at a pace that most in the industry would not have imagined a few years ago. The combination of energy policy, technology advancement, customers’ expectations for cleaner and more reliable electricity and other initiatives have created a new force: distributed energy resources (DER), specifically solar photovoltaic (PV) generation.

As solar PV technology prices drop, the rate at which commercial and residential customers install it climbs. Battery storage-also dropping in price-adds to solar’s appeal. Solar plus storage allows consumers to become more self-reliant with their electricity when the sun doesn’t shine, allowing them to disconnect completely from the grid and their utilities. Most likely, customers who install solar PV plus storage will remain connected to the grid, but their utilities eventually will become their electricity backup. 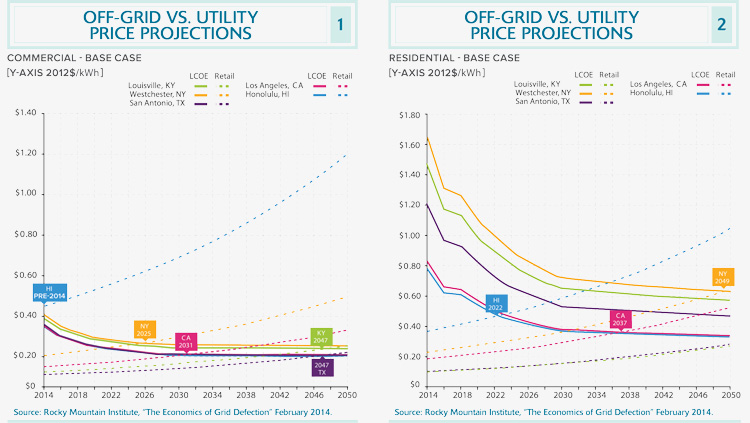 Increasing adoption of solar plus storage will have a profound impact on utilities and regulators. Rocky Mountain Institute (RMI), a leading independent, nonprofit think and do tank focused on energy efficiency and renewable energy, recently completed two analyses to help determine if and when solar plus storage will reach economic parity with grid-supplied electricity.

“We were not advocating for defection from the grid when we conducted these analyses,” said James Mandel, a principal at RMI and one of the studies’ authors. “We wanted to put a timeline on when utilities and regulators need to have a plan to work with these distributed energy resources.”

Utilities must adjust their business models or adopt new ones to take advantage of and maximize the value and benefits that solar plus storage can give utilities and their customers, Mandel said.

“These distributed resources, used in concert with the grid, should mean lower costs to the utility and all customers,” he said. “We understand that there are reasons for concern and that it (DER integration) won’t be easy, but customers are going to install solar plus storage whether utilities and regulators are ready or not.”

The Economics of Grid Defection

RMI’s first analysis on solar plus storage, “The Economics of Grid Defection,” considers the economics of customers’ disconnecting completely from the grid. RMI chose solar plus storage technologies because they are “increasingly cost-effective, relatively mature, commercially available today and can operate independent of the grid.” This combination threatens utilities’ sales and revenues most, the analysis states.

The modeled scenarios RMI used to determine projected electricity rates in each area, as well as the accepted cost forecast of solar and battery storage, are detailed in the analysis.

“We forecast future electricity rates based on recent historical trends of rising retail prices, and considered forecasts for needed grid investment,” Mandel said. “We looked at the most credible information we could find on the projected costs of solar and storage and averaged those to forecast the cost of solar plus storage. We believe the forecasts we used are conservative, especially the storage pricing. In fact, recent data points suggest that cost declines are exceeding our forecasts.”

The Economics of Load Defection

The follow-up analysis by RMI and HOMER Energy released this month considered when grid parity would occur if commercial and residential customers remain grid-connected. Unlike defecting from the grid entirely, remaining grid-connected would allow customers to buy more optimally sized, less expensive solar plus battery systems, which would be more economic for more customers sooner.

The latter RMI analysis, “The Economics of Load Defection,” reveals that customers’ perspective of the economically optimal system configuration evolves from grid-only in the near term, to grid plus solar, to grid plus solar plus storage in the longer term.

“The analyses we used for each geographical area was pretty straightforward,” said Leia Guccione, a manager within RMI’s electricity and industry practice. “As a starting point, we used assumptions similar to those we used in the earlier analysis for electricity price forecasts, region-specific customer load profiles, etc. We held rate structures and certain other variables constant in HOMER Energy’s modeling software.

“The one finding that surprised us most was that parity for solar plus storage happens much sooner when customers remain connected to the grid than it does with complete grid defection.”

Mandel said the analysis did not consider compensation for export of electricity to the grid, although many U.S. areas have programs that compensate solar customers for exported electricity. 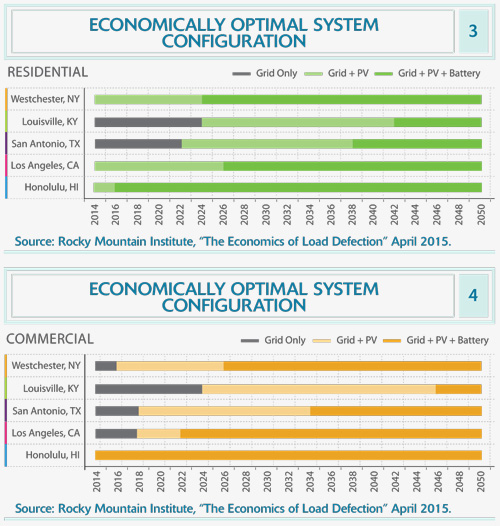 “This means that in some places, grid parity for grid-connected solar and solar plus storage likely will occur sooner than our analysis predicts,” he said.

Figures 3 and 4 illustrate expected grid parity for the five cities studied in the earlier analysis. Utilities could lose substantial load within the economic life and cost recovery period for major assets. In addition, solar-only systems are already economical in three of the five geographical areas studied and will be economical in the other two areas within 10 years, the analysis states.

Many electricity industry studies, including a Brattle Group study released in 2008, predict the U.S. electric grid will require some $2 trillion in investment from 2010 to 2030. Guccione and Mandel warned that if utilities and regulators don’t prepare for the erosion in kilowatt-hour sales, they will lose revenue and face economic peril because of stranded assets. A huge risk is that nothing will be done regarding regulation and rate structure to allow utilities and self-generating customers to capitalize on grid-connected solar plus storage, Mandel said. The relationship between these customers and utilities could become adversarial and cause the benefits that grid-connected solar plus storage brings to all parties to not be realized. If rate structures and business models aren’t adjusted, these systems likely will result in load lost for utilities, he said.

A main goal of these analyses was to drive innovation and guide the trajectories for electricity grid evolution, Guccione said.

“There is a cost to doing nothing,” she said. “Customers are finding ways to use available technology in their best interests, which are not necessarily aligned with the interests of utilities or grid operators.”

“This will only delay the inevitable load loss and create an adversarial relationship between solar generators and utilities,” she said.

“The Economics of Load Defection” concludes that if pricing structures, business models and regulatory environments appropriately value nonexporting DER such as solar and solar plus battery systems, utilities and customers will benefit.

Guccione and Mandel both said utilities and regulators have a small window to create a framework to ensure everyone benefits from solar, solar plus storage and other DER technologies.