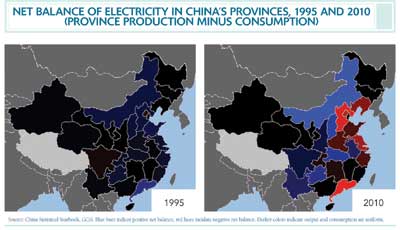 Geographically, China’s economic development has been terribly unequal. During a 15-year period, electricity demand in China’s industrialized and commercialized East Coast outgrew local supply. In response, planners initiated a multidecadelong project to link the energy bases of the North and West with the energy-hungry East and South. The suppliers of the ultrahigh-voltage transmission wires are almost exclusively domestic, although opportunities for foreign players still abound in an emerging market segment: submarine cables.

In 1995, China was generating more energy than it was using—about 3.175 billion kWh more. By 2010, the country’s electricity consumption had surged past its electricity production. Although at a provincial level, this effect was much more extreme: The electricity balance sheet of regions that developed quickly were deep in the red. China had to link its energy sources with its energy depots. Large transmission projects were necessary to feed the faster-growing regions of the East with the energy-rich regions of China’s midwestern provinces, particularly the Ximeng, Mengxi Zhangbei and Shaanbei energy bases (see figure).

This phenomenon has driven the accelerated development of an ultrahigh-voltage electricity transmission system, which when compared with more developed countries is just coming out of the experimental and developmental stage. During the past five years, China has established several transmission lines in efforts to tie the West with the East, the North with the South. The project appropriately is called the West-East Power Transmission Project. Its backbone is the three vertical, three horizontal (ä¸â€°çºµä¸â€°à¦¨ªsanzong sanheng) project, which is composed of three north-south transmission lines and three east-west transmission lines, making the title of state grid all the more appropriate.

Unfortunately for foreign companies, domestic companies have almost completely dominated the high-voltage transmission wire (with a voltage range above 500 kV) market. The high-voltage wire product, strands of bare wire, are not difficult to manufacture, and domestic companies have commoditized it—not difficult, considering orders are taken by weight, not length. Market dynamics for ultrahigh-voltage transmission wires are analogous with other price-dependent purchase markets.

The market for ultrahigh-voltage cables is about 3.59 billion renminbi in size from sales of 186,000 tons of wire sold (approximately equivalent to 88,000 km). In China, there are some 40 suppliers, none of which generate more than 300 million renminbi from sales—about an 8 percent slice—indicating a more segmented market. Also, companies mainly compete on price because product differentiability is minimal. None of the top 16 suppliers’ average price differentiates more than 16 percent from the industry average.

As China continues to connect the country through its transmission cables (further down the line, the country will update the 3-by-3 grid to a 5-by-6 grid or the six vertical, five horizontal project), foreign wire companies will have to sit on the bench. There is a smaller market, however, with great potential for foreign companies: submarine cables.

In the entire extra-high-voltage market—including wires and cables with a voltage range above 110 kV—submarine cables account for less than 0.2 percent of the total market by output (but closer to 2 percent by revenue). The application range for submarine cables are much smaller than the other cables because they are used only by small divisions in two end users: offshore oil rigs (petrochemical) and offshore wind farms (power). Offshore wind farms and oil rigs are a small proportion of the energy sector, although the search for fossil fuels and renewable energy has pushed China off the continent and into the sea.

Chinese policymakers have designated the offshore equipment markets—there are five segments: mining and ores, renewable energy, marine chemicals, living marine resources, and marine special resources—to be a strategic industry directed for growth during the next 10 years. The report, “China’s Long-Term Offshore Engineering Equipment Manufacturing Development Program” published by China’s Ministry of Industry and Information Technology, outlines China’s need to go offshore. Surrounding the lofty rhetoric in the report are some startling projections. The report estimates the offshore equipment market will grow from 30 billion renminbi in 2010 to more than 200 billion renminbi by 2015 and 400 billion renminbi by 2020, accounting for 35 percent of the total world market.

Two of the primary sectors among offshore equipment include mining and ores and renewable energy, to which high-voltage submarine cables are directly applicable. Some three-fourths of submarine cable revenues (about 580 million renminbi) are from sales to the power grid, whose growth will continue to blossom as China develops its offshore solar, wind, tidal, wave, current, salinity gradient power and osmotic thermal power. Of these, however, offshore wind power will make the largest impact for supplying power to the grid in the near future.

By the end of 2010, offshore wind capacity accounted for about 210 MW. By 2015, this number is expected to be 5 GW of capacity before taking another leap to 30 GW. The feasibility of such long-term prospects is debatable, but China is on track to make significant progress here. In 2012, eight projects were commissioned with an average of 350-MW capacity per project. In comparison with the past year, four projects were commissioned with an average of 150 MW per project. Driven by these strategic industries, the submersible cable market is expected to grow accordingly, averaging a compound annual growth rate of more than 25 percent by output during the five-year period. This is within a high-voltage wire and cable market that collectively grew 4 percent in 2011.

Besides the expectation to grow, the composition of foreign products also is promising. In 2011 only eight companies sold submarine cables, of which four were joint ventures or wholly owned foreign entities. These four companies accounted for some 31 percent of cables sold by output—much higher than the 1 to 2 percent market share currently held by foreign companies in transmission wire markets and the 23 percent market slice of the extra-high-voltage cable market. Although the market is small, submarine cables will grow quickly and end users still have inclination to use foreign products.

Luke Johnson has been an analyst at GCIS China Strategic Research for more than two years. He is based in Beijing, where he oversees the writing of the company’s multiclient studies. Johnson is originally from Boston and graduated from Carnegie Mellon University with a degree in economics and Chinese.