Speakers in a session on utility-scale renewable power during POWERGEN 2017 presented evidence that corporate buyers are driving an unprecedented demand for renewable energy today and will continue to do so into the future.

In #RocktheGrid – New Market Demand for Renewables, Lily Donge of the Rocky Mountain Institute and head of the Business Renewables Center (BRC), an organization that helps corporations understand how to buy renewable energy, said that this year 16 corporations have signed deals to purchase renewable energy and of those 16, 13 are new, indicating the growing interest.

When the BRC was launched in 2015, Donge said they hoped to attract about 50 organizations. The BRC has 213 member companies and 47 have signed PPAs for renewable power. Those 47 are driving the growth of more than 8 GW of power.

Businesses need the BRC because in general purchasing power is not their core business. (See chart for the list) so the organization arms them with enough information to understand how the power market works and then helps them negotiate a deal. 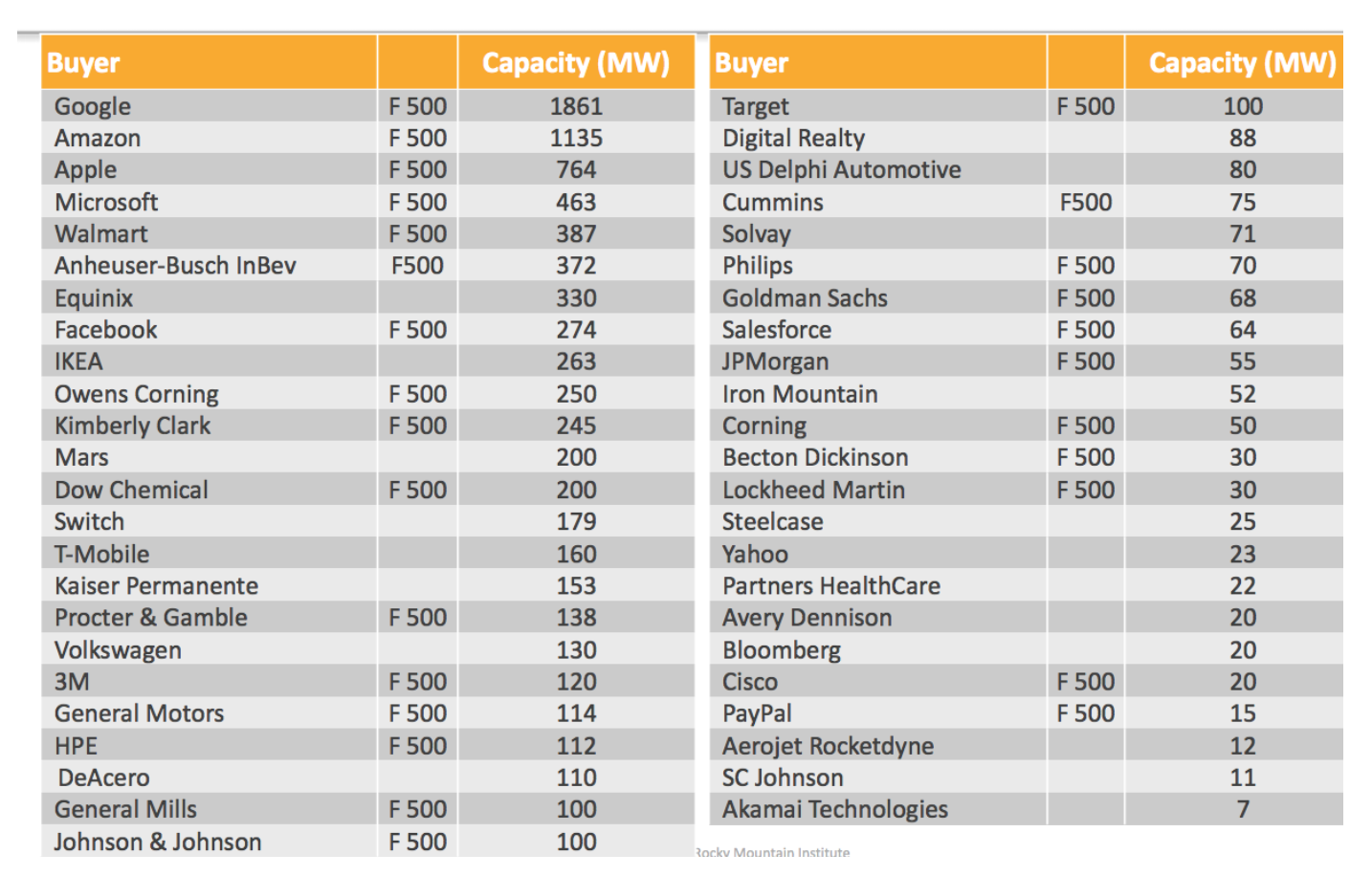 Robert Schulte of Schulte Associates then presented a macro vision of the grid that he hopes his organization will one day help execute. Schulte showed by connecting sunny and windy regions of the U.S. such as California and Wyoming and putting a large compressed air energy storage system in between, the U.S. could incorporate much more renewables into the grid.

In general, the peak production time for solar PV in California doesn’t line up with peak demand for electricity in California, which is why people talk about the duck curve. However, California’s peak production of PV electricity does correspond more closely with peak demand out east, which is three hours ahead of California, said Schulte. The National Renewable Energy Lab (NREL) is conducting a seam study right now that is exploring the same concept. Once the study is out (early 2018), Schulte said he will approach specific utilities to see if they are interested in a potential project.

John Hensley of the American Wind Energy Association (AWEA) stepped in for Tom Kiernan to present a look at the volatility of the natural gas markets and why utilities should be thinking about risk-adjusted volatility pricing when they consider adding gas-fired energy into the mix. The hedge value of renewable energy is an additional benefit that it provides. Hensley also answered questions about the tax bill that is making its way through Congress, explaining that the BEAT and AMT clauses are very problematic for wind energy going forward.

Dan Shreve of MAKE Consulting presented forecasts for wind and solar energy through 2020 (although the forecasts didn’t take into account tax reform) and Rob Threlkeld of General Motors showed how GM got into wind energy as a hedge against electricity pricing. By have a clear window into future electricity pricing, the auto manufacturer is better able to plan for the future. Fifty percent of each Chevy Volt is produced using solar energy, he said.