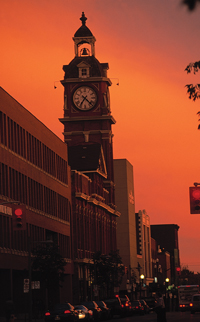 With all the discussion and controversy over residential demand response in North American energy markets, it is refreshing to find pockets of programs that customers and utilities have embraced.

Peterborough, Ontario, is a city of 80,000 nestled in the picturesque Kawartha region of lakes, rivers and cottages 90 minutes northeast of Toronto, Canada. So what makes this midsize city the hotbed of conservation? The success started long before demand response became a buzzword.

Peterborough Utilities started load control programs as far back as the 1950s and 1960s to control water-heater load. Why would the utility embark in this endeavor when there was an abundance of electricity in Ontario? The leadership of Peterborough Utilities realized that shifting loads away from peak times could ease the strain on equipment and the distribution system.

By the 1980s, the price of electricity was on the rise, and the incentive to move customers off of electric (after we had previously incented customers to install electric heat) was well underway. Leaders of Peterborough Utilities discovered a clever method to reduce the city’s power bill, then purchased from Ontario Hydro, which sold and distributed electricity in Ontario.

Instead of controlling the load only during critical-peak events, water heaters were shut off daily during the 4-8 p.m. peak. This, along with a campaign that asked customers to “Wait ‘Till Eight” for heavy energy use, resulted in peak power clipping and cost savings for Peterborough Utilities. The savings were so significant that Peterborough Utilities provided financial credits back to water heater customers, which covered the cost of the water heater rental and then some.

A “conservation fiesta” has begun in Ontario, the influx of renewable generation to replace aging and dirty coal-fired generation plants, and the wondrous world of smart grid. The concepts have not changed much, however, because avoiding the critical peak is still the goal of the Ontario Power Authority, a government agency tasked with assisting Ontario utilities in delivering programs targeted at each customer segment.

Although the desired result hasn’t changed, getting there has. The key question has become: How do we bring customers along for the conservation ride? Customer expectations are high. Customers need to be enticed into programs that will control their air conditioning and potentially make them warmer on hot days than they normally would like. There must be more than demand response for customers to be engaged.

In summer 2010, Peterborough Utilities Group was one of the first utilities in Ontario to deploy a full, two-way broadband system as part of a pilot program. Four out of 21 vendors were selected for the pilot, each with various communication methods. Some were quasi-two-way systems. Only one was a full two-way broadband system: The Energate Inc. system ran independently without having to integrate into any of the existing advanced metering infrastructure (AMI) systems, meaning no matter which AMI system was deployed, this technology could be used.

The concept was the vision of the Ontario Power Authority’s Residential Demand Response Working Group. The vision included a full, two-way system where we could see who was online and whether we were really obtaining the demand response we anticipated, and all in real time.

When the pilot ended and the equipment was to be removed, customers did not want to give the system up. The ability to control their thermostats from anywhere in the world through the Web or from their smart phones proved to be a carrot to keep customers engaged and in the program.

An additional carrot was a controversial in-home display (IHD), which provided customers with consumption analytics of their air conditioning, heating or other connected appliances, such as pool pumps.

Previous studies show that customers who had an IHD installed in their homes could save anywhere between 6 and 15 percent; however, it was also discovered that while customers found the device informative for the first few months, the units eventually ended up in kitchen drawers.

That has not been Peterborough’s experience. Customers in the pilot used their IHDs for the duration of the pilot and continue to use them as conservation tools. In addition, as an integral piece of the home-area network (HAN) for the ongoing program, customers are enjoying the information provided through the IHDs. Peterborough will have deployed 10,000 IHDs by the end of first quarter 2013.

In the next phase of the HAN in early 2012, Peterborough provided customers with a device that combined an IHD with a thermostat: the Energate Foundation. In one device, customers can enjoy controlling and accessing their thermostats through the Web while receiving the real-time consumption information of an IHD plus much more. The units collect and store historical consumption and provide feedback to customers. Information provided to consumers includes pie charts that advise if consumers’ daily consumption was lower, average or higher than normal.

Energate is still working on features to engage consumers. For example, instead of a pie chart, the company is testing a bar graph with a happy face or unhappy face, depending on consumption. At a glance, consumers can see how well they are conserving daily, weekly and monthly.

Despite the device’s features–the ability to set home comfort levels based on energy cost, visual indicators of time-of-use (TOU) rate times, real-time display of rates–the cool factor rules. Although advertising has been minimal until the full logistics have been ironed out, word-of-mouth has been powerful. Peterborough has been in full production for a few months, and it’s time to catch up on the backlog and deploy the Foundation fully in 2013.

TOU also has motivated residential customers to adopt conservation tools. Providing devices and information to help consumers conserve and shift load is paramount. Many utilities in Ontario already had moved to TOU ahead of Peterborough, and most provided their customers with Web presentation of their TOU data.

The problem is that many customers access their data and remain engaged a few months, but then they do not return unless there is a billing problem. Engaged, educated customers are more likely to take advantage of TOU rates and use the information to their advantage, but you have to make sure you keep them coming back for more.

Knowing this, Peterborough Utilities looked for an alternative. Lowfoot is a TOU Web presentation tool on steroids. Yes, it provides consumers with their hourly, daily, weekly and monthly TOU data broken down in each bucket, but it’s much more. Customers who want to take the next step can enter social media conservation through Lowfoot.

Here consumers can exchange conservation information with others, regardless to which utility they belong, and earn badges for posting information or conservation tips. It’s known as a “conversation on conservation.” More important, Lowfoot pulls in consumers’ historical consumption histories and builds a baseline and a target for each customer, thus giving customers something for which to shoot.

Customers receive daily text messages or emails to advise if they are above or below their average consumption and if they are expected to be over or under for the month, which potentially prompts them back to Lowfoot to see their consumption and take action.

All of this information alone would be enough to keep them coming back, but Lowfoot does not stop there.

Customers gain Lowfoot credits for shifting load or reducing their consumption to reach their targets, or even better, below their targets.

Consumers are advised daily (if applicable) when they have generated kilowatt-hours. These reports come daily and in a monthly summary in email or text message. Consumers can pool their credit with teams and organizations or donate them to charity.

Customers are becoming tech- and conservation-savvy. They require the tools and information to take advantage of TOU rates and keep their energy costs at a minimum.

This can be accomplished by ensuring customers are engaged and informed.

Peterborough Utilities Group is providing these tools and equipment to ensure their customers are engaged and active participants in energy conservation.

Author
David Whitehouse is director of customer and corporate services and the conservation officer for Peterborough Utilities Services Inc. Reach him at dwhitehouse@peterboroughutilities.ca or (705) 748-9301 ext. 1270.