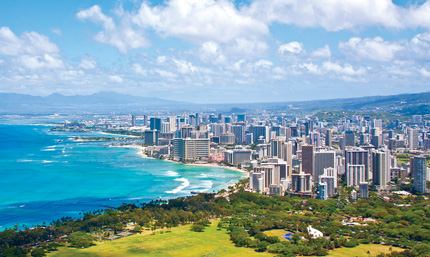 The companies are vertically integrated public utilities engaged in the production, purchase, transmission, distribution and sale of electricity. As island grids, the companies are not interconnected for additional support or relief during constrained periods. Each island relies on its own generation mix to provide secure, clean energy for Hawaii.

Hawaii spends billions of dollars annually on imported oil and some coal for its primary energy–roughly 10 percent of the state’s total economic activity. A growing understanding of global climate change adds to concerns. Hawaii’s total production of greenhouse gases is small, even on a per capita basis. But as an island state in a tropical hurricane path, residents are vulnerable to rising sea levels, intense storms and droughts that are part of global climate change.

HECO has worked for years to reduce Hawaii’s dependence on fossil fuel, increase energy efficiency among residential and commercial customers, and reduce peak demand on the grid when energy use strains the electric supply, at times resulting in disruptive load shedding.

Among HECO’s efforts was implementation of a residential load control program with the help of Honeywell, beginning in 2005. EnergyScout for the Home involved installing remote-controlled switches on home electric water heaters and cooling systems. The devices enabled HECO to briefly turn off water heaters and cycle off the cooling systems during peak demand periods and generation emergencies when electricity demand outpaces available supply.

By giving HECO greater control over electricity use among its residential customers, the utility is in a better position to supply power across the island without interruption.

When program enrollment soared and HECO reached the initial program goals by the end of 2009 with the ability to curtail up to 27 MW of residential load, the utility turned its sights to its small commercial customer base to test a similar program.

HECO teamed with Honeywell to implement a small commercial pilot program targeted at customers with demand levels typically ranging from 10 to 200 kW.

HECO singled out customers for the installation of load control devices on appliances including water heaters and air conditioners with a minimum of 3.0-ton capacity. Small commercial customers with window air conditioning units were excluded.

By the end of the pilot, 127 customers had enrolled and Honeywell had installed 417 switches resulting in 755 kW of curtailable load.

The agreement was a boost to Hawaii’s efforts to reduce dependence on imported oil, reduce carbon footprints and increase energy security. In 2011, 12 percent of HECO’s sales were from renewable sources, up from about 10 percent in 2010. This included energy from renewable resources such as wind, solar, waste-to-energy, geothermal, hydro and biofuels.

As of early 2012, renewable energy projects–including those in service, under construction, awaiting approval or in active negotiations–totaled more than 1,000 MW. As development of renewable energy on the island grids grows to high-penetration level, the need for quick-acting resources to bridge the intermittency of renewable energies was identified as a need on the electrical grid.

Wind and solar resources are environmentally beneficial and a valuable part of a generation portfolio, and they require backup generation to ensure security of supply when the wind dies or the sun doesn’t shine. In most places, this generation would come from dispatchable generation that relies on fossil fuels such as coal, natural gas or, in Hawaii’s case, oil.

To do so, some of these generating units must remain on to respond to a sudden drop in wind or solar energy. This means a certain amount of fossil-fueled generation spins at all times–an expensive proposition that can generate millions of tons of carbon emissions.

Under normal operating conditions, fast demand response resources might reduce the levels of generation that must remain online and provide a time gap between a sudden drop in wind or solar energy and when additional generating units can be started and become available online.

This approach can reduce the amount of conventional generating units online, thereby reducing overall energy costs and emissions and reducing Hawaii’s dependence on imported oil. Fast demand response also can be used to help stabilize the grid during emergencies if there is an unexpected shutdown of generation.

HECO saw the opportunities in fast demand response and outlined objectives for a pilot program:

The fast demand response pilot program launched in January 2012 in HECO and MECO territories to:

The semiautomatic implementation assumes a manual notification or automated phone call from the utility to an aggregator. The aggregator notifies participants to perform according to their predefined curtailment plan, assuming participant buildings have automation controls to respond within a 10-minute time frame.

This signal is based on the OpenADR standard developed by Lawrence Berkeley National Laboratory and is supported through the OpenADR Alliance, an organization of private sector companies, utilities and research institutions, to be adopted as a smart grid standard.

For example, a business that is willing to turn off equipment that normally requires 50 kW of power could receive a bill credit of $3,000 a year, regardless of whether the equipment is turned off. An additional incentive of 50 cents per kilowatt-hour is paid when a demand response event occurs, based on energy not consumed compared with energy the customer normally would have used.

HECO identified more than 1,000 commercial customers in the utility’s service territory with a peak load of more than 200 kW. Honeywell filtered the list by segments including retail, office, hospitality, health care and residential condominiums and began phoning the businesses to discuss fast demand response.

Once customers are interested, Honeywell conducts an audit of the facility to understand what load could be shed.

To date, nearly 30 percent of the initial list has been contacted, with 7 MW of load identified as potential leads and more than 2.7 MW of load that is expected to come through.

The first customer to be commissioned as part of fast demand response is Pacific Park Plaza, an office building in Honolulu. The facility was selected as an ideal candidate for the program because of its 400 kW of curtailable load identified during the audit.

Pacific Park Plaza is a typical office building but with a unique cooling system of individual heat pumps in every suite and zones of every floor that control HVAC. The building’s shed strategy includes a global temperature reset of 2 to 4 degrees in selected zone temperatures, duty cycling heat pump units to 15 minutes on and 15 minutes off, and shutting off makeup air and exhaust fans. After initial testing of the shed strategy, occupants did not notice a change in comfort.

Technical incentives, however, are needed to drive this market. Building system automation levels in facilities are not sufficient to be able to participate in OpenADR initiatives. Enough funding in the budget to provide technical upgrades that buildings need is important to the fast demand response program’s success.

One major distinction between this pilot program and other demand response initiatives is the type of load being targeted and potential load-shed strategies and how those differences affect the sales approach to entice customer participation.

In most commercial demand response programs, utilities typically target the largest energy users, often industrial customers that have potential to offer several megawatts of load when needed by temporarily shutting down noncritical industrial processes. If necessary, these customers typically have the option of relying on on-site backup generation to ensure operations stay online during peak events. This customer segment is seen as offering greater efficiency for the utility in getting control over more power, quickly.

Through the first year of the pilot, several commercial customer segments have had higher response rates to the program than other segments, given their business focus and facility infrastructures:

Office complexes. The largest potential opportunity for customer participation exists in office complexes. In nearly all cases, an office building’s central cooling plant is the primary load that can be shed quickly without noticeably affecting occupant comfort, given events related to renewable intermittency might last only up to an hour.

Retail. There has not been a great deal of interest within this segment. Few buildings have control systems that would allow for reducing system operation. There appears to be movement among several large national chains to change that.

Hospitality. A receptive audience exists in large hotels and tourist attractions, many of which employ many electric heat pumps for water heating, which has a significant amount of stored hot water. Hotels have been willing to make minor adjustments to their central plants. Customer comfort is still priority, so any load reductions typically are limited to common areas.

Condominiums. These facilities offer their own challenges. This segment generally is more willing to offer loads to control but typically lack automation and control over the common areas, as well as the individual apartment units. Their mechanical systems usually aren’t connected to a central control system and often require maintenance staff to manually draw down loads such as domestic hot water heat pumps, chillers and pool heating and pumps to meet the minimum load required to participate in the program. This can be difficult for a small maintenance staff to accomplish within a 10-minute time frame. Loads might not be as consistent, and there’s more room for human error.

Earle Ifuku is the director of HECO’s demand response division. Ifuku has been at HECO for more than 25 years in leadership positions including customer engineering, customer service on Maui, energy services, generation and IRP planning, regulatory affairs and information services departments.

Yvette Maskrey is the Hawaii and Idaho district manager for Honeywell Smart Grid Solutions. She is responsible for all aspects of the Hawaii and Idaho branches, from business development to personnel and operations. Maskrey has implemented utility customer programs with public, private and municipal electric and water utilities in Hawaii, Idaho and California for more than 20 years.