Utilities and solution providers alike continue to make progress on standards for distributed energy resource management systems (DERMS). At the IEEE PES T&D Conference and Exhibition held in mid-April, I caught up with Sharon Allan, Smart Electric Power Association’s (SEPA’s) chief innovation officer, who for more than two years has led a group of utility professionals in an effort aimed at creating industry driven and agreed upon DERMS standards. These standards are meant to ensure that solution providers understand what utilities want and that utilities understand what they are getting when they purchase a DERMS.

POWERGRID International first reported on this effort in its January 2018 issue in the article “Utilities Unite to Define DERMS.” The article explains how and why the DERMS initiative, coined DERMS TERMS by SEPA, got its start. In addition, it announced the release of its draft comprehensive requirements When released in November 2017, the DERMS TERMS working group asked interested parties to submit comments and feedback about the requirments.

SEPA then hosted a Grid Management Working Group at DistribuTECH in San Antonio on Jan. 22, which for the first time included solution providers. Only utility representatives attended previous meetings.

“We had about 180 people in the room at DistribuTECH during the DERMS meeting,” Allan said. “Solution providers were shocked at the number of utilities at the meeting. It escalated their interest.”

The meeting was planned to discuss the comments and feedback received about the draft requirements, but Allan explained that before that could be done, the group had to define DERMS.

“Some solution providers say they are DERMS providers, but they are really more of a demand response company. A utility would call them part of a DERMS aggregator, but not a DERMS provider. Others are offering ADMS (advanced distribution management system) and calling it DERMS.”

After much discussion, the group penned the following definition:

DERMS is a software platform with the specific function to forecast, monitor, control and coordinate distributed energy resources (DER) on the distribution electric grid system consistent with the resource management and optimization performed by a network model system.

In addition to the definition, the group created a list of functions that must be met for a system to be called a DERMS:

“- Provides simplified data presentation of the granular details of DERs assets, such as settings and performance, and presents DER capabilities as grid-related services consistent with the network model system.

“- Provides operational information of individual or aggregated DER assets to the DMS. 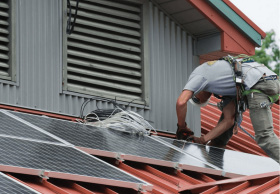 Creating a definition and a list of functions is a major accomplishment, but the working group still has much more to do. Because solution providers are just beginning to offer their input, the group will spend the next few months evaluating that feedback and determining if and how it should be incorporated into the DERMS requirements.

“Since DistribuTECH, we have been convening meetings to capture their (solution providers’) input into the DERMS requirements,” Allan said.

In March, the working group began meeting every other week via conference call. The main purpose of these calls is to focus on specific requirements that were identified during the meeting convened at DistribuTECH. In addition, the group is still trying to come to a consensus on the definition of DERMS.

“Before diving into the requirements, we had to take a step back after DistrbuTECH and get consensus on a definition of DERMS,” Allan said.

While there is no consensus yet, the group is moving forward with finalizing the requirements. Allan is pleased that both utilities and solution providers remain interested and involved in the initiative.

The working group has identified the focus of the bi-weekly meetings, each of which relates to requirements that were identified during the meeting that was co-located with DistribuTECH. The calendar and focus of the meetings from mid-April through June are as follows:

“It will take us most of the year to get through all of the requirement areas and then we will republish,” Allan said.

The various areas in review cover the following topics, which are included in the DERMS requirements:

The DERMS TERMS working group will convene in person at SEPA’s Grid Evolution Summit to be held in Washington D.C., July 9-12. The group also plans to meet at DistribuTECH 2019 in New Orleans the week of Feb. 4, 2019.