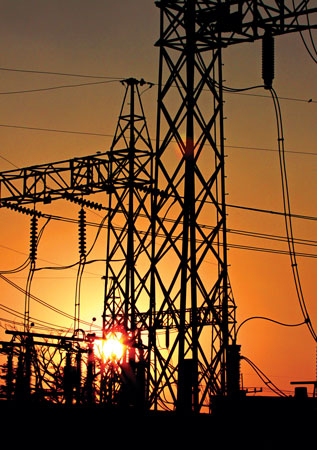 Volt/VAR optimization (VVO) is a process of optimally managing voltage levels and reactive power to achieve more efficient gird operation by reducing system losses, peak demand or energy consumption or a combination of the three. During the process, voltage control devices at a substation and on the circuit can be used to shrink the voltage drop from the substation to the end of the line and reduce the service voltage to customers while maintaining the voltage within defined limits. The efficiency gains are realized primarily from a reduction in the system voltage. This results in less energy being consumed by end-use equipment served by the distribution system.

The highlights of EPRI’s seven year Smart Grid Demonstration Initiative included VVO’s benefits. Most participating utilities deployed technologies to manage voltage levels and reactive power on their demonstration circuits. The volt/VAR management practices that included reducing supply voltage resulted in reduced peak demand or reduced energy consumption or both, as well as the traditional benefits of reduced system losses and increased real-power throughput from VAR management. On average, the statistical analyses deployed to estimate the impacts of VVO indicated that for each percent of voltage reduction energy consumption decreased 0.4 to 0.7 percent. Results varied by the type of circuit-residential, commercial or industrial loaded. The conservation voltage reduction factor (CVRf) was used to compare the results.

Utilities typically implement Volt/VAR management practices to achieve reduction in either peak demand or energy consumption. The peak demand reduction approach is usually used to reduce load for short durations, typically for only a few hours during high-demand or high cost periods or both. The second approach, often referred to as conservation voltage reduction (CVR), is used to reduce energy consumption for extended periods. Sacramento Municipal Utility District (SMUD) conducted a year-long field demonstration on multiple substations to evaluate both approaches.

SMUD tested 14 substations during the field demonstration. Figure 1 illustrates a random-day voltage reduction test pattern that was established to determine the impacts of lowering the voltage by approximately 2 percent at the substation power transformer load-tap changer. The randomized pattern was implemented across the substations so that seven substations were at a normal voltage level while the other seven were at a reduced level. The VAR management philosophy was to continue operating the switched capacitor banks at both the feeder and the substation. This was done to achieve the traditional SMUD transmission VAR support objectives of minimizing system losses and supporting system voltage.

The evaluation data was one year’s worth of one minute, substation-level, SCADA load and voltage data. The data were averaged to obtain hourly observations. Data errors in the supplied dataset required an initial screening of the data to eliminate bad data values. In addition, abnormally low or high load values, indicative of circuit switching or outages, were excluded. The limited number and type of excluded observations had little to no effect on the statistical models used in the evaluation.

Two statistical models, an ordinary least squares (OLS) regression and a median regression model, were developed to determine the impacts of volt/VAR management for the two operational approaches. The challenge was to build a robust model that could tease out hourly impacts for infrequent, short-duration dispatches under substantial load variability while accurately determining the time-averaged impacts of a sustained, long-duration VVO implementation, commonly referred to as conservation voltage reduction. 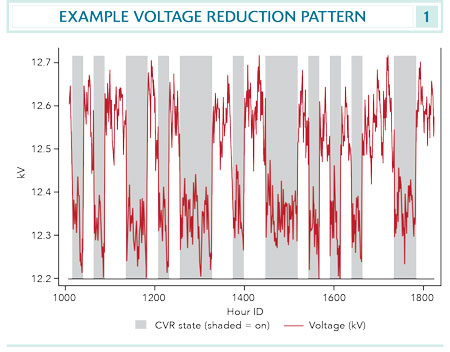 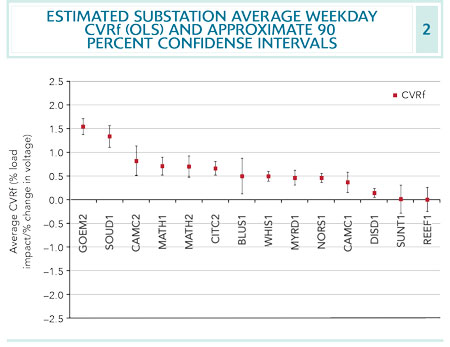 The variability of the loads was accounted for in the statistical models by including variables for temperature and humidity, time-of-day, day-of-week, and other periodic effects, such as photo voltaic (PV) generation or episodic loads, and seasonal loads that occur infrequently. The weather variables included hourly cooling degree hours (CDH), heating degree hours (HDH) and temperature-humidity indices. The model also was designed to control for different load-pattern days, such as Mondays, Fridays, other weekdays, weekends and holidays. 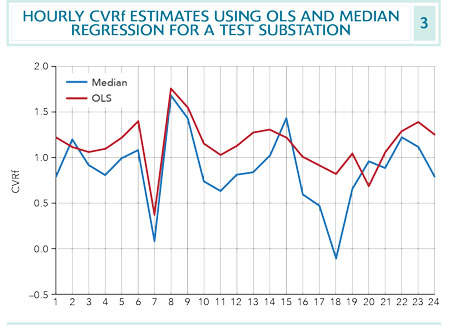 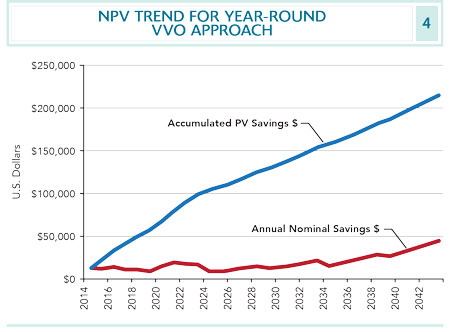 The two statistical methods provided similar CVR impact estimates for the group of substations. The individual substation CVRf estimates, however, ranged from zero to 1.5 using OLS and 0.2 to 1.4 using median regression. Figure 2 shows the substation average CVR factors and the associated 90 percent confidence bounds for weekdays, based on the OLS estimates. The 90 percent confidence interval bounds for the CVR factor were +/- 0.2 points on average, but differed widely between the substations.

The estimated impacts for weekend days were generally less statistically significant than weekdays. This was due in part to the smaller sample size for weekend test days. The weekend average CVRf, however, was similar to the weekday average (0.5 using OLS and 0.6 using median regression). In addition, the 90 percent confidence interval increased to +/- 0.33 on average for weekends using the OLS estimates. 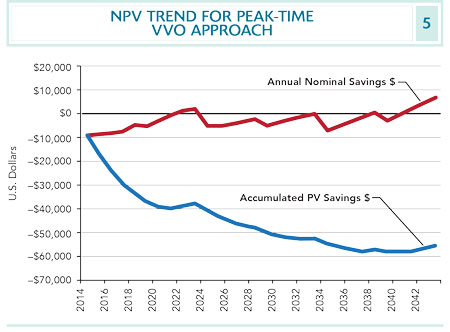 Additional findings and lessons learned from the demonstration and statistical analyses were:

Costs and Benefits of VVO

Figures 4 and 5 show the results of a basic cost-benefit analysis for one substation. For the purpose of this illustration, the main economic components are: cost (ownership revenue requirements) for the VVO systems, reduction in energy generation costs and capacity deferral (benefit). The only difference in the two analyses is that the year-round approach was enforced for all hours of the year and the peak-time approach operated only for a few hours a year. The results show that the savings from reduction in energy consumption move the net-present value (NPV) trend of the year-round approach to positive. For the peak-time approach, little energy consumption savings are realized and the capacity savings are not sufficient to overcome the initial and replacement costs of the VVO equipment over the 30-year project. Although the peak-time approach appears to be the less desirable option in this example, it might be a more attractive option under scenarios where VVO equipment installations are optimized for reducing peak demand and might be less costly than controlling voltage under other system conditions when implemented as a year-around option.

Volt/VAR optimization results were a surprise to EPRI’s seven-year Smart Grid Demonstration Initiative team. The team found both VVO approaches can be extremely impactful for reducing peak demand and energy consumption. The costs and benefits vary greatly between these approaches, however, and must be studied by each utility to determine which approach is best. Given these outcomes, EPRI believes VVO is here to stay and it looks forward to continuing the research and development that can make VVO even more impactful in a wider variety of scenarios, including those that are part of EPRI’s forthcoming Integrated Grid Initiative pilot projects. For more information about EPRI’s Smart Grid Demonstration Initiative visit smartgrid.epri.com. For more information about EPRI’s Integrated Grid Initiative, visit integratedgrid.epri.com.

Jared Green is a senior technical leader at EPRI. He was a project manager for several smart grid demonstration projects.