There are many factors driving the increasingly rapid adoption of distributed energy resources (DERs) to meet the world’s energy efficiency, grid reliability and greenhouse gas emission goals. For one, customers want more energy-conserving distributed generation options, and the investment costs are dropping rapidly to make them more affordable. This, combined with clean power initiatives and grid reliability concerns, have spurred game-changing regulatory changes that recognize the value of DERs as an integral component of the grid edge ecosystem. Factors like these, along with a need to evolve to a smarter energy future, mean that utilities are becoming increasingly proactive when it comes embracing new business models that embrace DERs as opportunities to move beyond traditional revenue models, address grid reliability concerns, meet carbon reduction objectives and defer infrastructure investments. 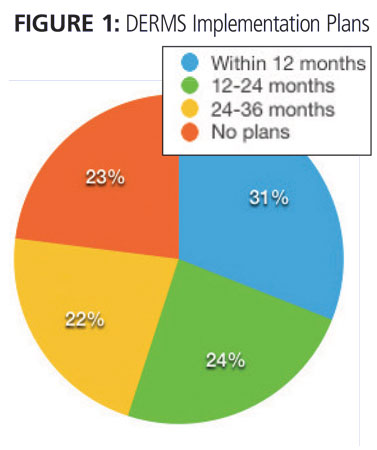 Utilities Weigh in at DistribuTECH

During February’s DistribuTECH 2017 conference in San Diego, Enbala Power Networks surveyed 107 attendees to gauge their opinions on DERs’ future, the challenges they impose and their plans on how they’ll leverage these resources in both the short and long term. Enbala is a leading provider of distributed energy resource management systems (DERMS) and virtual power plant (VPP) software.

Based upon survey responses, there is no question that distributed energy is top-of-mind for utilities today. Most utilities are either implementing a DER project or have plans to do so, the variety of DERs being leveraged is wide and far-reaching, and the grid balancing and reliability challenges that are being addressed by DERs are extensive. 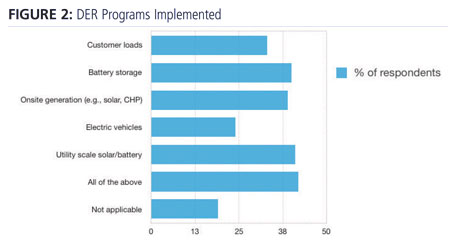 Some 18 percent of the respondents indicated that their organization had a DERMS platform in place, while the others did not. Among those who aren’t yet working with DERMS technology, a full 77 percent said they planned to implement their own programs sometime in the next 36 months. See Figure 1 for details.

Among those who have already deployed the technology, the tendency thus far has been to focus on demand response and energy efficiency initiatives, followed closely by DERMS pilot and feeder optimization and control projects. Figure 2 reveals the details.

It’s important to note that the industry is early in the technology adoption cycle, so these results may change as technology advances, stacked value initiatives evolve and ROI results are measured. 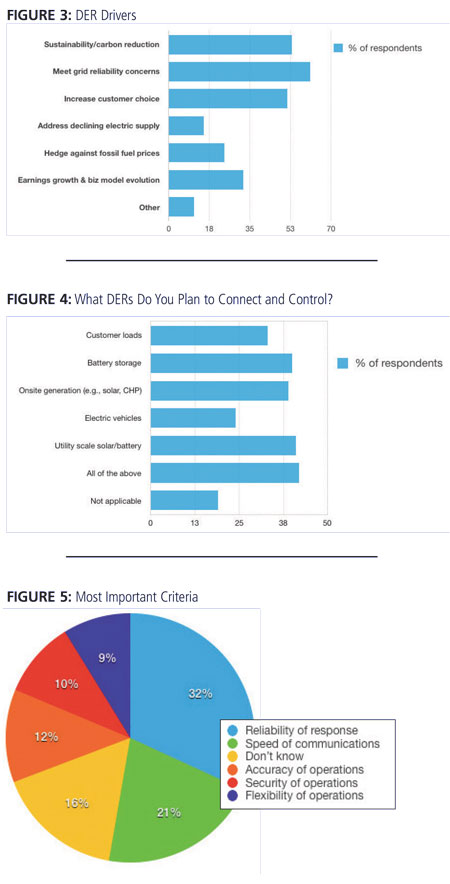 Why Utilities are Investing

Different utilities have different reasons and business drivers for investing in DER management, but survey respondents indicated that the number one most compelling reason is to meet grid reliability concerns. As Figure 3 illustrates, following closely behind as key drivers are achieving sustainability and carbon reduction goals and the desire to meet customer needs for increased choice.

The DER Playing Field is Expanding

Microgrids, electric vehicles, solar, wind, battery storage, flexible process load, CHP, smart inverters…. there’s little doubt that the coming years will bring more of everything when it comes to DERS. DERs are here to stay and proliferate, according to the survey respondents. When asked what DERs their companies plan to connect and control, 43 percent of the respondents said they intend to leverage all the DER types listed in the survey, while, as Figure 4 shows, others indicated various combinations of the options that were listed.

Success Measured by Reliability and Speed

One of the survey questions was formulated to elicit thoughts on what utilities believe is the single most important benefit for a DERMS to provide. Again, as shown in Figure 5, reliability was front and center as the No. 1 most important factor. Second in order of priority was communications speed, and third was accuracy of operations, followed by security and, last, flexibility.

When asked to clarify the quickest response speeds needed from DERs for load control, survey respondents had a wide range of answers, with many requiring sub-second response speeds. Figure 6 provides details. 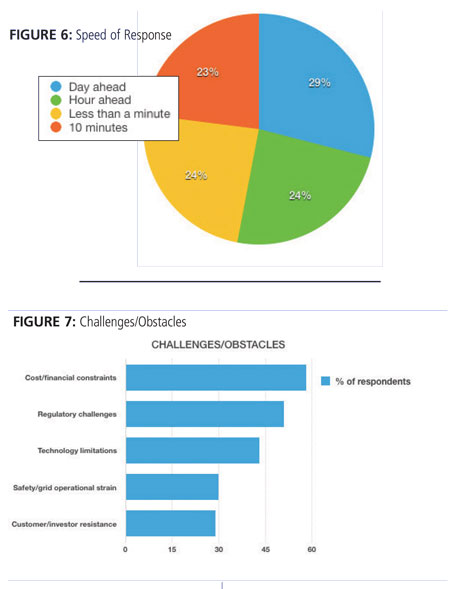 What’s Holding You Back?

With strong interest in leveraging DERs as a key component of the energy mix, utilities were asked what obstacles or challenges are holding them back. For this question, they were asked to check all obstacles that apply to their situation. As Figure 7 illustrates, cost or financial constraints were cited by most respondents as an obstacle, with almost half pointing to regulatory challenges.

There have been large strides in the growth of DERs, and as the industry evolves beyond utility demonstration projects into the mainstream, progress will, no doubt, be even more impressive. This survey revealed an interesting look at where utilities are today on the road toward increased integration of DERs into the broader energy mix, as well as where we are likely to evolve over the months to come. Stay tuned to next year’s survey to see how far we’ve advanced.

Ginger Juhl is president of Juhl Communications, a Denver-based technology marketing company focused on the utility industry. She has been working in the utility space for more than 20 years.