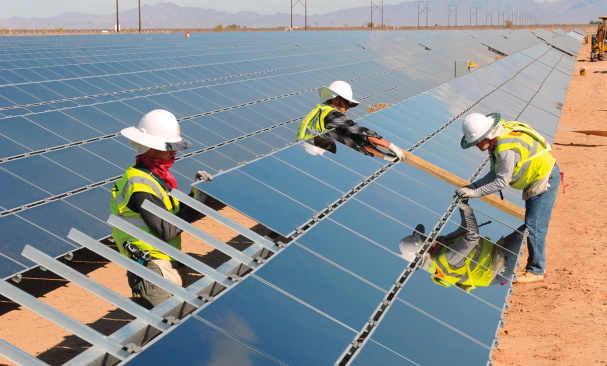 As part of the Department of Energy’s Grid Modernization Initiative announced by Secretary Ernest Moniz to improve the resiliency, reliability and security of the nation’s electrical power grid, DOE announced $18 million in funding for six new projects across the United States.

These projects will enable the development and demonstration of integrated, scalable, and cost-effective solar power technologies that incorporate energy storage to power American homes after the sun sets or when clouds are overhead.

Solutions for modernizing the grid and enhancing storage will be developed as part of the DOE‘s Grid Modernization Initiative under the SunShot Initiative. These efforts will dramatically increase solar-generated electricity that can be dispatched at any time — day or night — to meet consumer electricity needs while ensuring the reliability of the nation’s electricity grid.

The projects will aim to create an affordable pathway toward the efficient and sustainable integration of solar energy on the nation’s electrical grid in much larger amounts than currently possible.

The DOE’s six new integrated PV and energy storage projects will use internet capable inverters and will work in conjunction with smart buildings, smart appliances and utility communication and control systems.

Ultimately, the solutions developed under this effort will enable the sustainable and holistic integration of hundreds of gigawatts of additional solar energy onto the electric grid throughout the United States.

·      Austin Energy (Austin, Texas) will receive $4.3 million to create a distributed energy resource management platform that is adaptable to any region and market structure, aiming to establish a template that can help to maximize the penetration of distributed solar PV.

·      Commonwealth Edison Co. (Chicago) will receive $4 million to use smart inverters for solar PV and battery storage systems, working synergistically with other components within a microgrid community.

·      The Hawaiian Electric Co. (Honolulu) will receive $2.4 million to show the system-level benefits of enhanced utility visibility and control of the distribution system by enabling the proliferation of distributed renewable energy technologies.

In addition to supporting the solar energy affordability goals laid out under the Obama Administration’s SunShot Initiative, the projects are also part of the Energy Department’s Grid Modernization Initiative.

This effort aims to accelerate the strategic modernization of the U.S. electric power grid and solve the challenges of integrating conventional and renewable sources, while ensuring a resilient energy system combining energy storage with central and distributed generation.