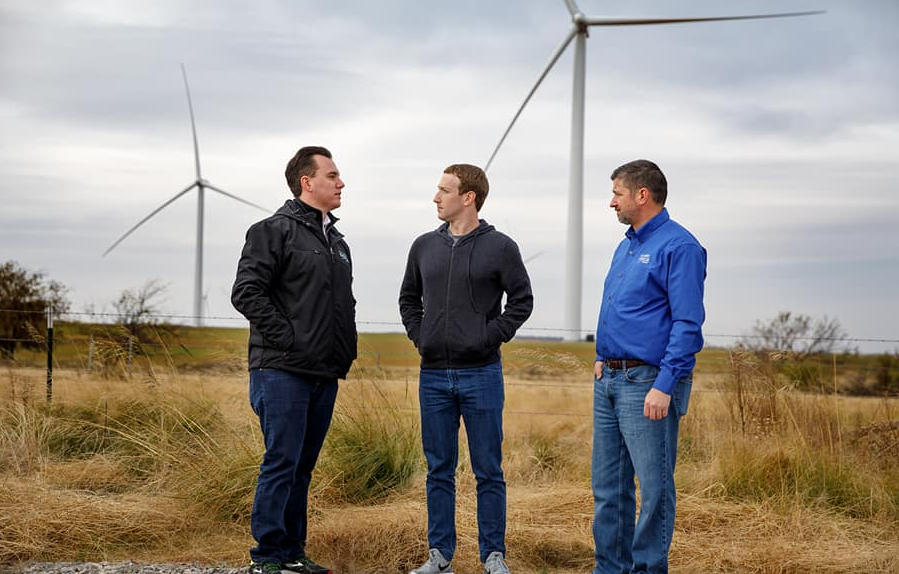 Facebook founder and CEO Mark Zuckerberg visited an Oklahoma wind farm Wednesday and stirred some debate on his social media comments comparing renewables favorably against oil and gas in this historic drilling state.

Wednesday’s journey was the last of Zuckerberg’s “Year of Travel” challenge. He visited a NextEra Energy wind farm in Duncan in southwestern Oklahoma.

In a Facebook post, of course, Zuckerberg revealed personal impressions and details of his trip. He recounted conversations with wind industry workers who told him their sector offered a more sustainable lifestyle than dealing with the volatility of oil and gas prices. The industry is still recovering from a two-year bust cycle.

“Oil prices are volatile, and any oil well eventually taps out, so you have to move from place to place, often working shifts a few weeks away from home at a time,” Zuckerberg posted. “By contrast wind is renewable and doesn’t run out, so the jobs are more consistent and sustainable.”

One of Zuckerberg’s followers on Facebook was not impressed.

“Excuse me Mark,” commented someone who identified himself as Tony Pierce and said he was a 12-year veteran of the oil and gas industry. “Yes it is hard. No it’s not for the faint of heart. However, without the jobs we have done through the years, nothing that you have built would have been possible. A little respect would go a long way.”

The Facebook founder actually replied to the comment by saying he had great respect for the industry and just wanted to recount what he heard from people he met on the travels.

In his original post, Zuckerberg noted that Oklahoma is experiencing earthquakes that may stem from the impacts of hydraulic fracturing for oil and gas production. He also noted the technological pace of renewable energy production and its impact on the workforce.

“A lot of people focus on whether technology creates or destroys jobs,” Zuckerberg wrote. “I’ve seen both this year—improving tech has created more jobs in some industries and in others it has eliminated jobs. But perhaps the most common dynamic I’ve seen is that the number of jobs stays about the same, but in order to operate the increasingly advanced technology, people need more training and therefore get more pay.”

The U.S. Energy Information Administration reported earlier this year that in 2016 wind energy overtook coal in Oklahoma’s electricity generation mix. Wind rose to about 25 percent statewide, according to the EIA, compared to  slightly less than 25 percent for coal-fired generation.

Zuckerberg also met in Oklahoma with “Dreamers,” undocumented immigrants who came to the U.S. as children.