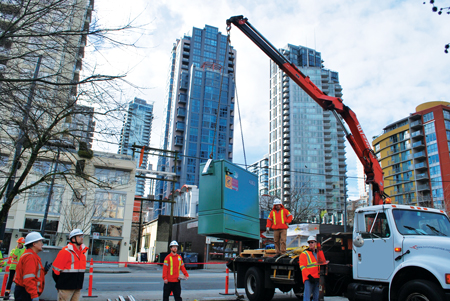 Through no fault of its own, switchgear is under greater pressure than ever to deliver protection, control and communications as the grid tries to accommodate generation coming from both sides of the meter and handle historic changes in metering and distribution.

Just as high pressure turns lumps of carbon into diamonds, so does the world’s adoption of renewables and smart-grid technologies drive the lucrative market for better switchgear that offers both circuit protection and 21st Century innovations on a 20th Century infrastructure. Research firm Technavio this year announced that it expects the global medium- and low-voltage switchgear market to exceed $101 billion by 2020, while MarketsandMarkets last year predicted that the estimated value of global switchgear markets will rise almost 13 percent annually to $136.7 billion by 2019.

Either way it likely leads to good news for the coffers of switchgear manufacturers and service companies such as Eaton, S&C Electric, G&W, ABB, ASCO Power Technologies, Siemens, Schneider, GE and Hubbell, among others. Yet it also presents continuing challenges to deliver fault detection, tripping and responsive monitoring at the same breakneck speed of change happening on the generation, transmission and distribution sides, as well as the wide scope of state and federal regulatory aims.

A greater number of projects are focusing on submersible and gas-insulated switchgear either pad-mounted or underground, which provides a buffer against outdoor risks such as ice and wind, but, of course, presents other intense challenges such as the need for customization and footprint constraints.

Nonetheless, several massive projects are ongoing that could show the future of switchgear deployment. Internationally, ABB recently won a $100 million contract to deliver a gas-insulated switchgear substation in Iraq as part of that country’s rebuilding effort. Domestically, Pepco began exhaustive work last year on its $1 billion DC PLUG joint effort with the Washington D.C. Department of Transportation to move power lines below ground. “This will result in the greatest reliability benefits for the least amount of costs,” Caryn Bacon, Pepco’s director of underground projects, said at the time.

Thousands of miles away on the opposite end of North America from the DC PLUG, BC Hydro also is undertaking a revolutionary effort that involves installation of scores of submersible switchgear. BC Hydro will spend the next 30 years putting in new switchgear as part of its Downtown Vancouver Automated Open Loop endeavor. The first loop, which began in 2015, installed 10 submersible vista switches and controlgear, while a second open loop is now under construction. Altogether, the British Columbia utility expects to install some 200 switches and controlgear over three decades in downtown Vancouver and more than double that amount in the rest of the province.

“The 10 that are in place have been performing as planned,” Colin MacIntosh, BC Hydro’s senior engineer for distribution standards, said. “The largest benefit that we’re currently seeing is SCADA indication and control capacity that did not exist with the previous equipment.”

BC Hydro had to work closely with its vendor, S&C Electric, to design the gear technology specific to its urban and subterranean needs. Equipment standards were developed even while the project was underway, which “meant we were required to refine and adjust designs and standards on the fly,” MacIntosh pointed out. The switchgear technology incorporated SEL 751 protective relays using IEC 61850 GOOSE messaging over fiber optic cable; this was a first for BC Hydro and made the protection scheme possible.

“In this open loop system, a fault on a cable section will be detected by the switchgear,” MacIntosh said. “The fault will be cleared by the immediate upstream switches on the open loop contributing to the fault. The downstream switch will be opened to isolate the fault. An alarm will be generated at the control center to alert the operator of the events. The operator can then close one of the normally open points in the open loop to restore power. The restoration should take on the order of five minutes as opposed to four hours of manual switching.”

John Caskey, vice president of the National Electrical Manufacturers Association who worked for the utility industry 20 years before joining NEMA, remembers crews walking those power lines mile by mile to find the source of an outage. Nowadays, analytical software and devices are working with switchgear to locate and isolate a fault. The switch opens the circuit while reclosers allow power to flow through other circuits and limit the number of customers affected.

“As you move power to where the load is, such as wind farms, solar arrays and backup diesel generators…you have more devices and need more switches to bring the power on and offline,” Caskey noted. “Switchgears are an important component allowing us to use distributed resources and microgrids more effectively.”

Distributed energy sources have helped drive several important changes to metal-clad and metal-enclosed switch technology, Eaton project manager Brannon Barter pointed out. Reducing the footprint of enclosures and switchgear is emphasized even as monitoring, control and safety expectations have increased.

“Distributed energy resources have benefited from the ability to incorporate controls, relays and communication systems into the metal-clad switchgear instead of constructing a control building,” Barter said. “Reduction in footprint has been accomplished through utilization of smaller circuit breakers, incorporating front accessible switchgear designs, reducing the additional space required to provide arc-resistant switchgear and increasing design flexibility in order to meet application requirements in a reduced footprint.”

Undergrounding cables often means putting switchgear and control systems on pad-mounted enclosures aboveground. BC Hydro chose underground vault locations for its Downtown Open Loop project, but even that had complications, MacIntosh recalled. Out of sight was not always out of mind for those closest to the switchgear.

“The downtown is very congested with many utilities competing for space,” he said. “In addition, many commercial businesses were opposed to having equipment installed in front of their establishments. These two factors created numerous delays in our schedule and required us to create a standard for control cable lengths; they connect the street-level low voltage enclosure to the underground switchgear.”

Switchgear updates are happening all over the world. In fact, growth in the Asian market accounts for a large part of the nearly $140 billion global value of switchgear technology in three years, according to MarketsandMarkets.

Customers are generating more of their own power, via solar photovoltaic and other means. Their experiences with Google, Amazon and other Internet tools also have conditioned them to expect nearly instantaneous service, something that utilities are still scrambling to match. They used to simply accept momentary outages and often never even knew what happened, NEMA’s Caskey recalled.

Not anymore. If information is king, nearly everyone is royalty nowadays. The customer wants to know exactly when and where the outage occurred and how quickly it will be fixed. Utilities are keenly aware they must find faults fast, admit them and correct them with the least amount of disruption to the overall grid.

“That in itself requires more switches,” Caskey said.