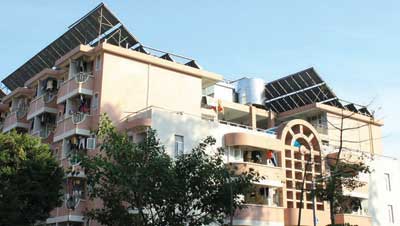 Many communities and large institutions are seeking to employ microgrid technology because they know it will prevent outages, especially during severe storms; however, choosing reliable power generation sources to support the microgrid when it’s disconnected from the grid (island mode) is critical.

Most communities cannot afford to purchase and maintain generation exclusive to their microgrids, especially absent revenue needed to assure their reliability. The need for a power source that’s reliable, cost-effective and green drives consideration of distributed generation assets.

Most were designed to produce power in conjunction with the conventional grid. The power produced often is used where the distributed generation system is installed, offsetting power purchases from conventional sources.

Because they operate in parallel with the grid, the distributed generation resources aren’t required to regulate frequency or voltage. Those functions are inherent in the operation of the grid. They also don’t need to follow the changing electrical loads of their hosts. Some CHP systems often regulate their energy output in response to the thermal loads they serve with electrical production a secondary product.

Some small (less than 100 kW), packaged CHP systems have induction generators that operate only with an external source of excitation voltage and are intended to operate in parallel with utilities, not as standalones.

Most distributed generation installations are designed not to export power to the grid and limit their output so as not to produce power flow out of the host facilities, always maintaining some small level of import.

Interconnection standards such as IEEE-1547 and UL-1741 require that during a loss of utility voltage or power, the distributed generation isolate from the grid and shut down to prevent a potential island from forming, where a small distributed generation system continues to power other customer loads after the loss of the normal utility source. An unexpected island condition can result in hazards to line crews that are restoring power, and, when uncontrolled, can result in hazardous voltage conditions on other customers’ services. This is why islanding normally is avoided in distributed generation project designs.

Sometimes, however, it’s desirable to use one or more distributed generation resources to maintain power to a facility or group of facilities when a utility is unavailable, such as during emergencies that cause power outages.

Distributed generation systems can be designed to supply power to an islanded system, but this requires consideration of factors that differ radically from the normal grid-connected operation. The extent of the distribution system that remains an island must separate from the remainder of the utility distribution system. This normally is accomplished by reclosers on overhead distribution and circuit breakers for underground lines.

Once islanded, the distributed generation must switch from baseload power control to frequency control because the utility can’t regulate bus frequency. Bus voltage, rather than generator power factor, then must be controlled by a generator’s voltage regulator. It must vary excitation of the generator in response to reactive power demand to maintain bus voltage.

If the electrical load of the facilities in the island exceeds the instantaneous capacity of the online generation, the islanded system will collapse and go black. Generation capacity must always exceed the load to allow for normal demand fluctuations. Some means of automatically shedding load is essential for stability. A good rule is to maintain online generation capacity at 120 percent of the steady state load.

If the intent of the distributed generation island is to avoid loss of electrical service, then all of the above changes in operational parameters must occur simultaneously and on the fly whenever the microgrid breaks away from the utility. Generators switch from baseload to frequency control; voltage regulators switch from power factor control to bus voltage regulation; and excess loads shed. It sounds complicated, but it’s achievable and common among power systems that island.

Many distributed generation systems aren’t intended to operate islands. Some types are better suited to operating as fixed or slowly adjustable baseload. Some sources are good at following rapidly changing loads (e.g., elevator or air conditioning motors). Some sources, such as PV and wind, vary because their energy sources vary.

Inverter-based resources. In the case of inverter-based distributed generation (e.g., PV, wind and fuel cells), most are current source-type inverters that rely on outside sources of 60-hertz voltage to provide a commutating source that controls the inverter frequency. They are designed to operate in parallel with the grid. Without grid support, they are incapable of islanding. Nearly all UL-1741 certified inverters are of this type.

Some inverters are voltage source types capable of self-commutation and commonly found on fuel cells capable of island operation.

PV and wind sources, regardless of inverter type, produce only varying outputs based on the strength of solar radiation or wind. Incorporating these sources into a small islanded microgrid is problematic because they act more like a varying load than generation and require an aggressive response from load-following generation to maintain steady bus voltage and frequency and to compensate for the varying output. If properly paired with energy storage technology, however, PV and wind are good microgrid power sources, albeit expensive in capital cost.

Inverters have limited capability to adjust to reactive power demand changes, such as starting large motors and maintaining voltage stability during surges caused by transformer inrush currents or other inductive load swings.

Fuel cells. Fuel cells are limited in their ability to follow changing load and are best operated at a constant baseload. Typical fuel cell load and unload ramp rates are 10-20 kW per second-far too slow to follow load swings from motor-starting appliance operation, etc. To compensate for slow ramp rates, fuel cell vendors recommend installing load-balancing devices. This is a resistive load bank that converts some of the fuel cell’s electrical output to heat that’s then rejected to the atmosphere. The intent is to generate more power with the fuel cell than needed and modulate the false load created by the load bank to counteract the effect of load swings. Because it requires continuous conversation of electrical energy to heat, which is then rejected, it is inefficient. A much better solution is to pair the fuel cell with an energy storage device, normally a storage battery and bidirectional DC-AC converter. The battery absorbs excess generation by the fuel cell and supplies power to the bus during sudden load spikes. Thus, the fuel cell can operate at a near steady state baseload with only slow adjustments to keep the battery charge-discharge cycle mid-range.

Lean burn engines use a lean fuel mixture (i.e., close to stoichiometric conditions) because manufacturers want to maximize fuel economy and lower emissions of regulated pollutants, primarily NOX and unburned hydrocarbons. This requires that the lean burn engine run in a nearly steady state load condition. Sudden load increases applied to lean burn engines will cause the engines to stumble and might disrupt the frequency, tripping the generator off-line. Lean burn engines work best in a baseload mode, as when they are paralleled with the grid. They don’t work well in a load following application unless paired with other generation resources that follow load more easily. In contrast, rich burn engines operate with a fuel or air mixture that is sufficiently rich to allow rapid throttle response into load changes without engine stumbles. Engines more easily follow changes in load without affecting frequency, and higher emissions usually are offset by external emission control technology, such as three-way catalysts. This engine is a much more robust selection for load following and operates well in an islanded condition.

Diesel engines. Although not green, diesel engines remain the best choice for load following applications in the 100- to 5,000-kW range. Diesel engines have a near instantaneous demand response capability and can accept large block loads-up to 100 percent of the engine’s power rating in a single step. Many power systems that use other slower-responding, greener, grid-connected technologies for production of baseload power can employ diesel generators when islanding. The slower-responding resources then are baseloaded, and the diesel operates to handle load swings.

Combustion turbines. Combustion (gas) turbines are a good choice for power generation in the 5-MW and larger sizes. They usually are fueled with natural gas; however, many units have dual-fuel capability, can operate on both gas and liquid fuels, and can switch fuel type. In grid paralleled operation, they often are baseloaded and usually at maximum capacity. But to satisfy utility interconnection and contractual requirements, some vary the output to limit the electrical production to maintain a net power importation. Combustion turbines generally have poor part-load fuel efficiency and load following characteristics, especially those units designed for very low NOX emissions. Rapid load swings can cause a flameout condition in the combustors, causing the unit to trip off-line. Typical ramp rates for low-NOX combustion turbines in the 5- to 10-MW class is 40 to 100 kW per second.

Governor and frequency control. Most grid paralleled generation operates at baseload at a fixed capacity. Once islanded, generation resources shift to load following operations with mechanical power regulated to maintain bus frequency instead of constant output. Speed control can be isochronous, and bus frequency-regardless of load or droop in-can droop with increasing load. Most islanded systems use isochronous governor control to maintain constant bus frequency and allow some baseloaded generators to run in droop.

Voltage control. In grid paralleled mode, most distributed generation regulates the excitation of the generator to maintain a constant power factor or constant reactive power (VAR) output. Once islanded, the excitation must be controlled to maintain bus voltage. Each generator must provide a proportional amount of the total reactive power load. If the excitation isn’t controlled proportionally, circulating currents will result. Circulating currents don’t flow from generator to load between generators, causing unnecessary heating within the windings.

The demands of a microgrid, designed to provide reliable electric power when disconnected from the utility grid, are very different from grid paralleled distributed generation. The characteristics of each type of proposed generation must be evaluated carefully, and a system must be selected that uses the strengths of each generation asset and assures that the system can supply reliable power under all expected conditions.

William Moran is a senior electrical engineer in TRC’s Power Delivery Engineering Practice. He has more than 35 years of experience in electrical power generation and distribution, including the design, construction and operation of large, campus-type power distribution systems ranging in size from 1-25 MW.