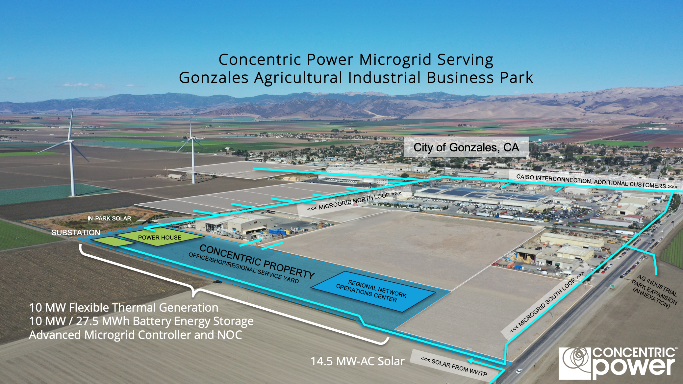 Last week, microgrid developer Concentric Power and Gonzales Electric Authority (GEA), established by the City of Gonzales to oversee its new municipal electric utility, announced that they have executed an Energy Services Agreement (ESA) to deliver wholesale electric power via a community-scale microgrid in and around the Gonzales Agricultural Industrial Business Park.

The microgrid will initially have 35 MW of capacity to provide power to the Agricultural Industrial Park, which houses processing facilities for some of the country’s largest fresh vegetable and wine producers. It will also meet the clean energy requirements of the City of Gonzales’s Climate Action Plan.

Concentric Power designed the microgrid to integrate a mix of generation sources, including 14.5 MWac of solar, 10 MW/27.5 MWh of battery energy storage, and 10 MW of flexible thermal generation, all of which will be managed by the company’s microgrid controller.

The system will allow the park to island from the wider energy grid, ensuring that end users have reliable, high-quality power 24 hours a day, 365 days a year, even when facing planned or unplanned grid outages. The microgrid will also include a privately owned substation that will allow energy and capacity services to be sold into the California electricity grid.

In the heart of the Salinas Valley – one of the most productive agricultural regions in the country – the City of Gonzales formed GEA to help attract and retain a strong agriculture and industrial base as well as to protect companies doing business there from unplanned power outages and poor power quality. The project will support continued economic development and job creation to further build the City’s tax base. With the Agricultural Industrial Park currently one-third occupied, the ESA allows for the power infrastructure to expand and meet growing demand.

“The companies who do business here need to know that they will have the power they need, when they need it, from a variety of green and low-carbon sources,” said Maria Orozco, mayor of the City of Gonzales. “This is exactly the kind of project that benefits everyone involved: dependable, independent power that helps us reach our sustainability goals. This agreement will help deliver that.”

The $70 million project will be funded primarily by Concentric Power, with supplemental funding from GEA and the Gonzales Municipal Electric Utility (GMEU) towards ownership of the distribution infrastructure. Concentric Power will develop, design, build, operate and maintain the microgrid assets, including both generation and distribution. The distribution assets will be transferred to GMEU. The initial term of the ESA is 30 years, and the project is expected to break ground in mid-2021 and be ready for service in 2022.

“Multi-customer microgrids meet an urgent need for energy resilience and lower cost for communities and industry,” said Brian Curtis, founder and CEO of Concentric Power. “Fortunately, the related technology and business models have reached critical mass and are ready for large scale adoption. We’ve been fortunate to work with a visionary, progressive municipal utility like GEA on this watershed project. I believe this marks an inflection point that will open up the opportunity for more diverse applications while solving an immediate bottleneck in the Ag Industrial Park.”

“Gonzales has a long history of being proactive with our economic development programs, and the Ag Industrial Park’s tax revenues provide economic resilience in tough times,” added Rene Mendez, Gonzales city manager and executive director of Gonzales Electric Authority. “This green, dependable power expansion project supports current landowners within the Park and provides the needed infrastructure for future development.” The effort began in 2017 with the City of Gonzales’s consulting team ZeroCity and OurEnergy, who led the early development and feasibility studies that culminated in a competitive solicitation in late 2019.

Concentric Power will also be providing engineering, procurement, construction, and long-term services to the project, and has plans to build a Network Operations Center, field office and shop in the Park to support its work in the region.