The evolution of energy markets is accelerating reliance upon distributed energy resources (DERs).

These DERs range from rooftop solar photovoltaic (PV) systems to smart thermostats that allow residents to control heating or cooling systems via their smartphones.

The technologies and new frameworks that will be necessary to manage this increasing two-way complexity remain unclear, but successful strategies are being deployed all over the globe. One strategy is virtual power plants (VPPs).

As a result of the wide divergence of what constitutes a VPP, Navigant Research has devised its own definition: a system that relies upon software and a smart grid to remotely and automatically dispatch and optimize DERs via an aggregation and optimization platform linking retail to wholesale markets.

VPPs can be viewed as one manifestation of the “energy cloud,” a term Navigant Research uses to describe how DERs can be managed virtually via software that can deploy hardware in a dispersed network.

A growing number of smart grid vendors such as Ventyx, a division of ABB, offer asset performance software for managing assets and operations as cloud-based Software as a Service (SaaS) solutions.

These SaaS solutions represent the virtualization of energy services.

Many U.S. grid operators rely on Ventyx’s software analytics to manage complexity at the transmission level.

Meanwhile, the company is moving from customized software solutions to a more standardized, unified smart grid architecture that reaches down to the retail customer level.

Developed in collaboration with Deutsche Telekom, Ventyx’s cloud-based demand response management system service has been commercialized at the T-City project in Friedrichshafen, Germany.

The energy cloud business model revolves around the ability of anyone, anywhere being able to sell energy services-including reductions in demand-into an open market, typically on a forward-looking basis, anticipating shifting demand and supply. If these committed resources come up short, other markets enable spot purchases to fill in the gaps; however, to make both markets work, rules must be hammered out to allow these transactions to flow back and forth across a common carrier grid.

To many engineers, this sounds awfully nebulous. After all, real steel in the ground is necessary to generate power and transfer electrons over wires.

Schneider Electric likes to use the analogy of Amazon when explaining VPPs, noting that the store is virtual, yet the delivery of assets, whether books, CDs or electricity, is real.

This change in customer relationships is a powerfully disruptive force for utilities, as formerly captive customers suddenly become active participants in energy markets with the ability to reduce utility revenues and offer new services that can help maintain grid frequency and voltage-often from the same technologies that have been viewed as creating the problem (i.e., PV). Thanks to smart inverters, energy storage, the smart grid and information technology software advances, DERs can be transformed from problem child to a utility solution via VPPs and other manifestations of the energy cloud.

The primary goal of a VPP is to achieve the greatest efficiency and profit for asset owners while maintaining the proper balance of the electricity grid.

From the outside, a VPP looks like a single power production facility that publishes one schedule of operation and can be optimized from a single, remote site. Internally, a VPP can combine a rich diversity of independent resources into a network via sophisticated planning, scheduling and bidding of DER-based services. 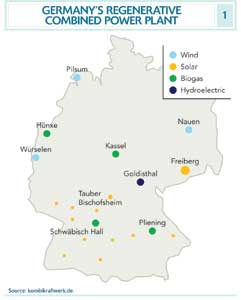 The so-called “Regenerative Combined Power Plant” (RCPP), a 23-MW VPP in Germany, is among the most compelling projects. Given that Germany is phasing out nuclear power, this experiment carried enormous implications.

Thirty-six wind, solar, biogas, combined heat and power (CHP) and hydropower generators were operated as a single power plant, supplying power 24/7 to the equivalent of 12,000 households.

For his work on the renewable supply management experiment, Kurt Rohrig of Kassel University was awarded the German Climate Protection Prize in 2009.

While that’s only one-10,000th of Germany’s total supply, this successful R&D venture has convinced academics and renewable energy advocates that all of Germany could be powered with a diverse blend of complementary renewable energy resources.

Despite this provocative experiment, other academics have argued the R&D project failed to account for grid congestion challenges that might frustrate this sort of VPP under real market conditions.

That’s why Siemens’ 2012 announcement to fully commercialize a supply-side VPP model is so important.

A range of supply- and demand-side resources can be optimized whether the generator is a large wind farm or an on-site biogas unit.

Siemens was one of the first private companies to explore VPPs and played a key role, along with German utility RWE, in another of Germany’s pioneering efforts: a VPP project that aggregates the capacity of nine hydroelectric plants ranging in size from 150 kW up to 1.1 MW with a total VPP capacity of 8.6 MW.

The VPP framework opened new power marketing channels for these facilities that would not have been viable if these DERs still operated as stand-alone systems.

The Siemens-RWE VPP exceeds 20 MW, with the addition of CHP units and emergency backup power systems to the original hydropower portfolio.

The system will be expanded to 200 MW by 2015 by further integrating biomass, biogas and wind resources into the network, making this an official commercial offering in Germany where recent market changes created fertile ground for such supply-side VPPs.

What About Demand Response?

In an ideal world, peaks in demand can be met by ramping down loads in near real time instead of firing up expensive and often polluting fossil peaking power plants.

Demand response also is gaining traction slowly in Europe and Asia Pacific (in countries such as India) as smart grid deployments expand; however, demand response outside the U.S. is less about shaving peaks and more about balancing variable DERs.

The goal is a completely automated aggregation that can prevent, rather than react to, extreme grid contingencies and pay participants for use of their demand reduction to the power grid.

Thanks partly to regulatory support from the Federal Energy Regulatory Commission (FERC) and grid operators such as PJM, North America leads the world in vendor VPP revenues.

VPPs represent just more than a $1 billion market today, but they are expected to reach more than $5.3 billion over the next 10 years under a base scenario developed in May, according to Navigant Research’s report “Virtual Power Plants” (see Figure 2). 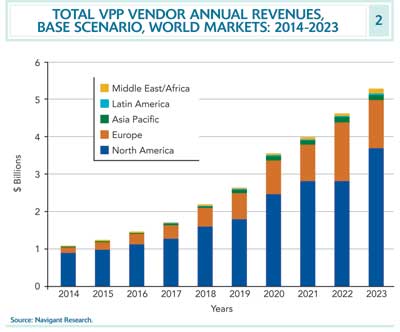 The goal for VPPs is a mixed asset VPP that brings DERs and demand response together to create a synergistic sharing of grid resources that squeezes more value from them, thereby reducing capital costs.

Few of these projects are in commercial operation.

Denmark is playing a global leadership role with projects such as the Faroe Islands and the Island of Bornholm.

Mixed-asset VPPs also can include everything from diesel generators to heat pumps and electric vehicles, and some are more focused on thermal energy than electricity.

Though this VPP segment might be able to fully realize the benefits of the smart grid, it also faces the largest technical and commercial barriers to widespread market adoption.

The increasing mix of diverse potential resources adds complexity, but it also marks a shift.

The new paradigm seeks to recognize all loads, devices, generation, batteries and even motor vehicles as resources able to contribute to balancing the distribution grid.

This increasing convergence of complexity requires sound engineering that recognizes the physics of distribution feeder operations and novel market redesigns.

VPPs could serve as platforms on which any node on the grid represents a potential solution to electricity supply, distribution and reliability challenges.

Peter Asmus is principal research analyst with Navigant Research and an expert on microgrids and virtual power plants. During his 25 years’ experience, Asmus has consulted at corporations, government agencies and nonprofits. His prime expertise is integration of renewable energy to the grid, public policy analysis, writing and public speaking.