As much as 40 percent of electricity to power air compressors in some industrial plants is wasted through inefficient compressor controls, according to an Office of Energy Efficiency and Renewable Energy report. Utilities and other energy efficiency organizations can help companies save energy and money by sharing best practices and by offering technical services to identify and quantify energy efficiency upgrades, as well as incentives to help reduce the payback for upgrades.

An example is the Green River, Wyo., plant of Church & Dwight, the manufacturer of Arm & Hammer Baking Soda, powdered laundry detergent and cat litter. Compressed air supports production, including the transport of raw materials and finished products at the plant. The Green River facility has three compressor rooms. Each room contains two compressors that feed into air dryers and receivers and feed the common air delivery system (see Figure 1). Standard practice at the plant was to run more compressors than needed to ensure an adequate peak air supply to the plant. Even when the laundry detergent line was shut down three days a week, its compressed air lines remained pressurized because of processes that required static pressure. A sufficient number of compressors were run to meet the peak demand required by the dense phase transport process. Compressors were turned on manually and used variable displacement and inlet modulation for part-load control. As demand decreased on each compressor, variable displacement decreased the power to about 70 percent at 50 percent flow. As demand decreased further, the inlet would begin to modulate, further reducing flow and power until the discharge pressure eventually reached the unload set point. Once reached, the compressor would unload, but instead of allowing the oil sump to fully blow down, the compressor would recirculate air, keeping power at about 62 percent all the way down to zero air delivery. Because of the excessive number of compressors that were running, many of the them were at that less than 50 percent position-effectively flatlined. Compressor power was fairly constant independent of demand. Church & Dwight was not aware of the delivery of each compressor because there was no gauge or flow meter to indicate actual load. As a result, the plant was consuming more than twice the energy needed for an optimal system. Beside the electrical compressors, the plant ran a diesel, engine-driven compressor full time to ensure enough air was available. Tuning a complex system such as this to improve efficiency is more difficult with the control inputs’ being made at the compressor rather than via a central control system. Because of control inefficiencies, it also is typical for the plant to run the system at a higher pressure than necessary to meet production needs. These factors combined to waste as much as the aforementioned 50 percent of the energy used to provide compressed air. 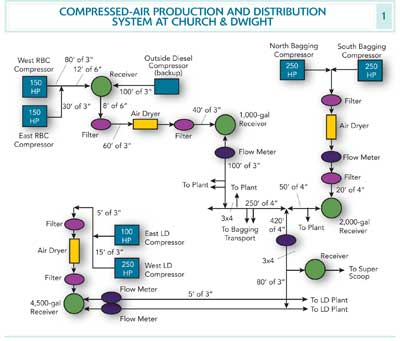 The potential for energy savings is attractive to industrial plants and gets the attention of utilities that want to help customers improve energy efficiency. In the case of Church & Dwight, Rocky Mountain Power offered technical expertise to define and quantify energy efficiency opportunities and a financial incentive if the company could install a control system to realize the savings. In return, Church & Dwight saw the incentives as helping justify the cost of improved controls.

Industrial companies often do not have the expertise to analyze their energy consumption fully and design a technical solution. Rocky Mountain Power called an experienced consulting firm, Compression Engineering Inc. of Beaverton, Ore., to perform a study and prepare an energy analysis report.

The energy analysis report suggested Church & Dwight could save significant energy by running fewer compressors on average at their optimal efficiency points and by eliminating the inefficient part-load controls.

How the controller works

The PL4000 controller efficiently matches air supply with demand using control algorithms called Airgonomics. When a new compressor is to be brought online to fill the need for additional air, the controller refers to a table of compressor combinations that provide optimal solutions for different conditions.

The controller uses a typical PL4000 staging table to select the combination of compressors to use depending on the needs of the plant (see Figure 3). Within the configuration specified by the staging table, the control system picks the exact compressor to run based on an algorithm that takes various factors into account, including how many hours each compressor has run or when maintenance is scheduled for a particular compressor. The decision often is not obvious; it’s not always economical simply to run the most efficient compressor all the time. If that were done, the system would tend to wear out the most efficient compressor first.

To avoid this, the controller assigns each compressor a run time readiness score that changes as the compressor runs. When a compressor hits a threshold, the control system gives it a break and turns on another with a similar capability from the same group to replace it. 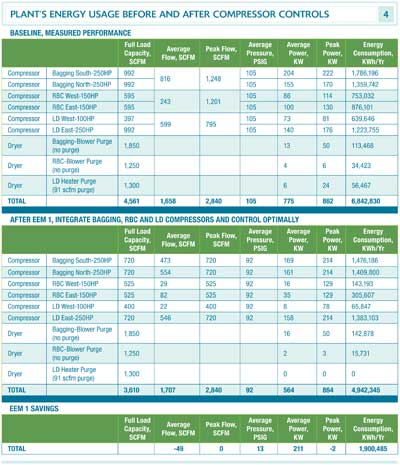 Energy consumed by the compressors has decreased 28 percent, and the system is able to run at 13 pounds per square inch gauge lower average pressure than before the control system was added.

With the incentives offered by Rocky Mountain Power, Church & Dwight estimates the simple payback period for the compressor controls upgrade is two years.

The project economic payback was bought down to one year by the incentive from Rocky Mountain Power.

Setting up and tuning the system revealed some of the compressors needed repair. The power draw of the compressors showed that the turn valves on two of them needed adjustment. The full displacements of the compressors were not being used. Technicians also found a faulty solenoid valve on one of the bagging compressors and a sticky inlet valve on another compressor that weren’t diagnosed until the control system was installed and activated.

With the easy-to-use operator interface that comes with the PL4000, Church & Dwight’s maintenance people can modify how the system operates to accommodate special requirements. Using the controller’s network interface, they can monitor the compressors from their offices if they like.

Industrial customers have many energy efficiency opportunities. For their more complex systems such as compressed air, an excellent approach is for utility energy efficiency programs to provide highly qualified technical expertise and cash incentives.

This addresses the barriers of limited capital and staff to identify solutions.