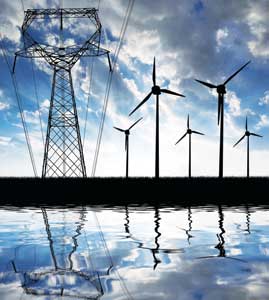 Can load control provide for more economical integration of wind rather than building expensive supply-side options in the future?

A four-year research project in Canada’s Maritime Provinces, PowerShift Atlantic, is striving to answer that.

The focus is to find effective ways to integrate wind energy into the electric power system without asking customers to change consumption or behaviors.

At the center of the research is intelligent load management (ILM), which was developed to monitor, measure and control various load classes to reduce the impact of wind generation variability on the grid.

ILM uses commercial off-the-shelf (COTS) technologies to measure, aggregate and dispatch industrial, commercial and residential loads that are controllable by the system operator.

This type of aggregated load then can be managed in a similar manner to an electrical power generating plant using forecasting, dispatch instructions and related telemetry.

Wind generation has the benefit of providing electricity from a source that uses free fuel-the wind-and is renewable in the sense that generation that takes place from wind today does not deplete the wind that can be used to generate electricity tomorrow.

The application of technology coupled with the correct architecture and active participation of end-use customers will provide a new class of power system resources, enabling the use of a higher degree of wind-generated power capacity that is sustainable long term.

Wind generation, however, has some disadvantages.

Unlike traditional generation resources, it isn’t controllable, and predictability of power generation is based on forecast models.

PowerShift Atlantic is developing a tool called the Virtual Power Plant (VPP) that will allow the shifting of energy consumed by controllable customer loads through the application of technology to soften the effects of variable, undispatchable and unpredictable renewable generation.

The technology is being developed to provide an alternative means of supplying energy capacity or ancillary services by actively managing commercial and residential aggregated loads.

In load control, the transmission system operator’s primary function is to keep the electrical system reliable and stable by matching generation to load on the system on a continuous basis.

Through the use of current technologies, customer loads will be controlled by the system operators in an aggregated manner that minimizes the effect on individual customers.

This capability is permitted by the existing and emerging communication and advanced control technologies of smart grid.

The project will develop business practices, which will encourage customer participation in load control programs for the benefits of wind integration, greenhouse gas reduction, cost savings and an overall increase in power system efficiency.

The load shape management function of VPP is designed to simplify the system operator’s job of balancing the grid.

It does this by using conventional resources to create generation equal to the amount of load remaining to be powered once the forecasted wind power generation contribution has been taken into account.

To accomplish this, the VPP receives two key sets of input data on an hourly basis:

The VPP uses that data to determine the optimal feasible load curve for the aggregate loads under its control over a 24-hour planning horizon.

The input data is received hourly, and every 15 minutes the VPP conducts an optimization run and issues gross dispatch instructions (GDIs) to the aggregators for each of their load classes.

The VPP is optimizing over a 24-hour period and incorporates the impact factor data to take into consideration the effects of managing load on its ability to control load later in the planning horizon.

By doing so, it avoids some of the pitfalls reported in demand response programs.

For example, when a demand response event takes place, load would be reduced immediately without accounting for sustainability of the reduction or the need for the load to resume at a later time, which would result in peak shifting.

Early in the PowerShift Atlantic project, it was discovered that load shaping directly to the wind generation forecast wasn’t desirable; however, through discussions with the system operators, it became clear that adverse effects on grid balancing for the system operator could result.

Consider a day when load would peak at levels close to the capacity of the grid.

If the VPP were to load shape, for example, to the wind generation forecast, its optimization would be shifting load into the peak hours.

With sufficient load under its control, this scenario could result in the VPP’s increasing the load beyond the capacity of the grid.

Even in a less dramatic situation, the VPP might negate the valuable generation contribution from wind.

Once this was understood, it was decided to change the focus to manage load net wind generation.

From a VPP perspective, the source of the shape curve is irrelevant; the VPP determines the optimal load trajectory to best smooth the shape forecast provided by the system operator.

Other curves potentially can be investigated by having the system operator send the corresponding shape curve to the VPP.

Implementing the RTGD capability through the portal tool provides a low-cost way of experimenting and demonstrating the required capability.

It is envisioned that individuals at the Nova Scotia and New Brunswick system operators will use the RTGD capability in this manner until it has been demonstrated successfully and a decision has been made that integration with the system operator’s operational systems is merited.

Regardless how the RTGD is issued, through the portal or SCADA system, the response of the VPP is the same; it issues a sequence of GDIs to each aggregator for each of their load classes that specify the load levels that are to be achieved throughout the duration of the RTGD.

Optimizations that occur during the time frame of the RTGD associated with the load-shaping function do not adjust the VPP or aggregator load class load values during the RTGD time frame.

They only affect the load control plan in the time frame after the expiration of the RTGD.

After three years into the four-year effort, ILM is a reality.

Although the research project is not yet complete, this program already has resulted in all initially engaged customers’ remaining engaged.

In addition, the VPP is performing as expected.

Steven H. Winstead is a managing consultant in Leidos’ smart grid practice, formerly a part of SAIC. He has more than 32 years of experience in systems engineering, systems integration, program management, requirements definition, systems testing, and commissioning. He is currently the systems architect for PowerShift Atlantic, a research program using ILM as a means to enable wind generation integration.