Ivanpah Solar Electric Generating System in California is more than 92 percent completed as of May 22, according to project backer BrightSource Energy. 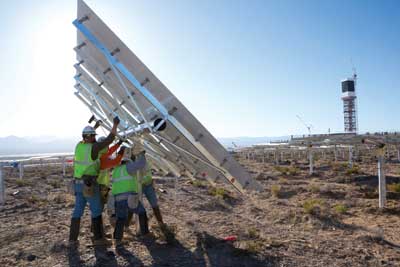 Unit 1 is more than 95 percent complete, and the final heliostat was installed in the solar field on April 11. That same month, steam blows started at the unit, a process that clears out mill scale or debris inside the pipes before the project is operational.

BrightSource also started first flux at Unit 2, which is when a significant amount of sunlight is reflected off the solar mirrors and concentrated on a surface of the boiler. The unit is more than 92 percent complete, and will generate 133 MW of solar power when it is operational.

Unit 3 is more than 89 percent complete with more than half of the heliostats installed to date. The plant is expected to begin commercial operations this year.