To fly a plane around the world on solar energy alone was considered almost impossible until Solar Impulse took to the skies last year. The plane is midway through a circumnavigation of the globe, currently traversing the United States. The technologies that enable it to keep flying day and night have important applications on the ground, especially in places without grid connections or reliable electricity supplies.

Solar Impulse is essentially a flying microgrid, equipped with 17,000 solar photovoltaic panels, battery storage and a sophisticated control system to deliver power to its four high-efficiency motors. In fact, the same basic components of Solar Impulse’s power system can be found in microgrids in remote locations, but increasingly in grid-connected applications as well.

The onboard components are linked to monitoring systems on the ground via real-time connections, similar to how remote monitoring and control systems are used in earth-bound microgrids today. These systems leverage the ubiquitous connectivity of the internet of things, but also extend to delivering services and connecting people to devices in the field. That’s why at ABB we talk about IoTSP: the internet of things, services and people.

Traditionally microgrids have relied on diesel- or gas-fired generation, but advances in renewable power and energy storage technology have brought the costs of alternatives like wind and solar down while making them easier to integrate. Meanwhile, utilities and system integrators are moving down the learning curve as microgrid projects continue to proliferate.

For remote off-grid locations it comes down to delivering reliable electric service without the insurance of a grid connection. The cost of operating fossil fuel plants in such locations is high, so on-site renewable generation offers a cost advantage as well as energy assurance over the long term.

A notable example is in the remote communities of Marble Bar and Nullagine in Western Australia. Thanks to grid stabilizing technology, which enables high solar-energy penetration, the towns now obtain close to 60 percent of their power from solar generation, saving approximately 2,000 barrels of diesel and 1,100 tons of greenhouse gas emissions each year. In the case of grid-connected microgrids, the business case revolves mostly around reliability, especially for critical infrastructure like hospitals or must-run industrial facilities like data centers.

Utilities are also increasingly looking to microgrids to help integrate wind and solar. For instance, a newly upgraded microgrid on Kodiak Island, off Alaska’s south coast, derives virtually all of its 28 MW of capacity from hydropower and wind, supported by two 1.5 MW battery systems. 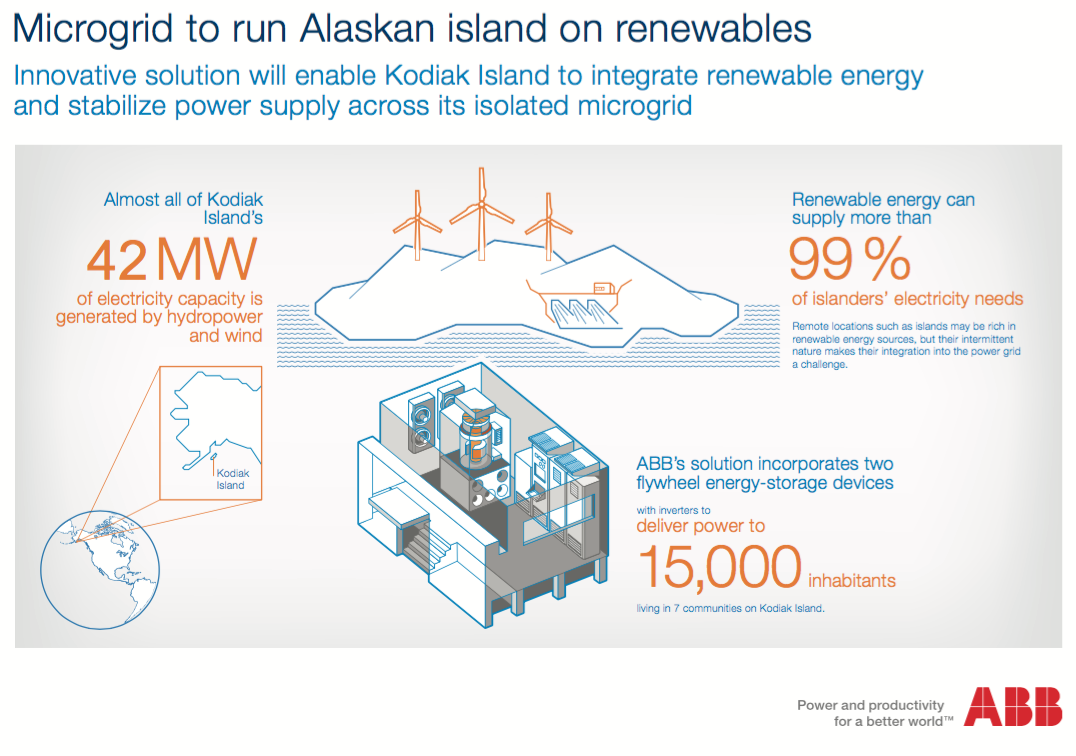 Today, the US has around 2,000 MW of installed microgrid capacity, a figure that is likely to increase substantially in part thanks to policy reforms such as FERC’s ruling to allow storage devices to provide frequency regulation services in wholesale power markets. Similarly, some states have provisions for microgrids to cross public thoroughfares, something that previously was only afforded to “utilities.”

We are at the beginning of a long-term trend toward a more decentralized power system, one that is both cleaner and more resilient than the one we know today. Microgrids are already playing a key role, and as costs continue to fall and the underlying technologies continue to advance, they will drive the shift forward.