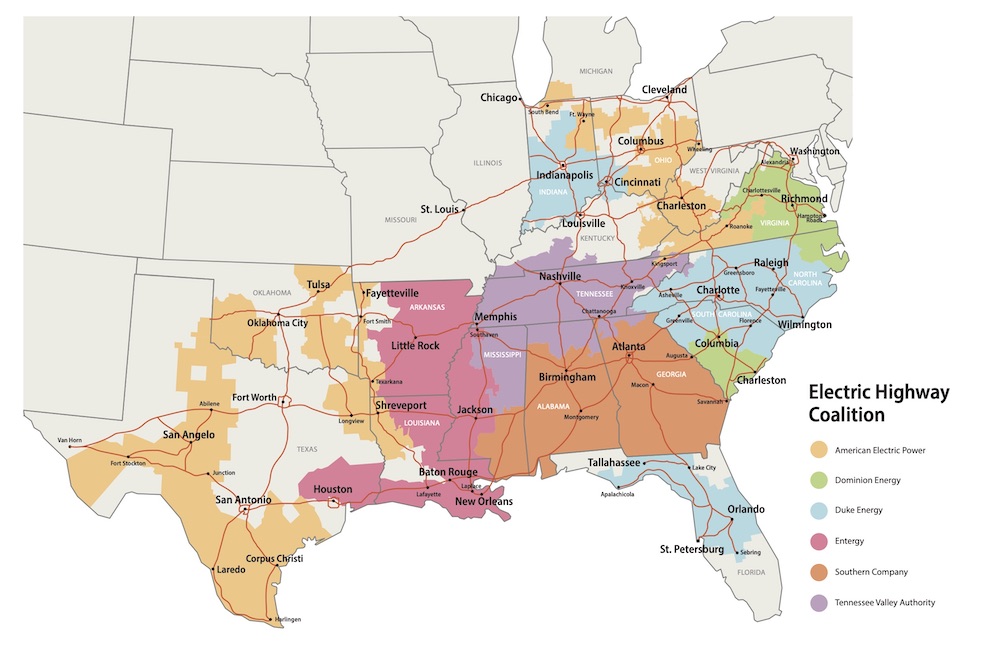 AEP, Dominion, Duke, Entergy, Southern Company and TVA to add EV Fast Chargers in their regions. Utilities welcome others to join them.

Six major utilities announced a plan to ensure that electric vehicle drivers have access to a seamless network of charging stations connecting major highway systems from the Atlantic Coast, through the Midwest and South, and into the Gulf and Central Plains regions.

The Electric Highway Coalition — made up of American Electric Power, Dominion Energy, Duke Energy, Entergy Corp., Southern Co., and the Tennessee Valley Authority — announced the plan, which they said will enable EV drivers to travel across major regions of the country and be able to charge up through a network of DC fast chargers for EVs.

The companies are each taking steps to provide EV charging solutions within their service territories. This represents a first-of-its-kind effort to place fast chargers across different company territories.

The Edison Electric Institute estimates 18 million EVs will be on U.S. roads by 2030. While many drivers recognize the benefits of driving an EV, some are concerned with the availability of charging stations during long road trips. With efforts like the Electric Highway Coalition, electric companies are demonstrating to customers that EVs are a smart choice for driving around town as well as traveling long distances.

Sites along major highway routes with easy highway access and amenities for travelers are being considered as coalition members work to determine final charging station locations. Charging stations will provide DC fast chargers that are capable of getting drivers back on the road in approximately 20-30 minutes.

“TVA and the local power companies we serve are focused on being innovative transportation leaders, and we’re pleased to collaborate with neighboring utilities such as American Electric Power, Dominion Energy, Duke Energy, Entergy Corp. and Southern Company on this initiative,” said Jeff Lyash, TVA president and CEO.

“Together, we can power the electric road trip of tomorrow by ensuring seamless travel across a large region of the U.S. This is one of many strategic partnerships that TVA is building to increase the number of electric vehicles to well over 200,000 in the Tennessee Valley by 2028.”

Lyash believes that electrifying transportation can incentivize the same innovative transformation that electrifying the Tennessee Valley did back when TVA was founded. He said, “EV adoption will spur jobs and economic investment in the region, keep refueling dollars in the local economy, reduce the region’s largest source of carbon emissions, and save drivers and businesses money.”

TVA is working to increase EV adoption in its seven-state service area with the recently announced EV Initiative, which is based on building partnerships with LPCs, state agencies and other organizations.

TVA is making investments and coordinating partner funding that could bring up to $40 million in programs to support EV adoption in the next five years. This initiative is a multi-year plan to accelerate the electrification of transportation through programs to reduce or eliminate the market barriers that currently prevent more people from choosing EVs. By addressing the barriers to EV adoption, the anticipated outcome is:

The Electric Highway Coalition welcomes interested utilities to join as it seeks to extend the reach of network. Additionally, it supports, and looks forward to working with, other regional utility transportation corridor electrification initiatives.