Coast to Coast, Utilities Dealt With Myriad of Storms This Winter

Storms are never timely. They may be expected but they are never welcome. You just deal with what the front brings you because there is no turning back.

Unwelcoming, fortunately, does not mean unready. Indeed, the key ingredient to modern disaster planning and damage assessment on the electrical grid is expectation and evaluation, which keeps workers safe and engaged and customers informed, while restoring power as soon as possible.

“No storm is taken lightly and a gusty day is taken just as seriously as an approaching hurricane,” said Kristina Pappas, spokeswoman for Public Service Enterprise Group’s Long Island unit (PSEG Long Island). “The utility is continually improving current processes, such as social media frequency and press release timing, and upgrading existing systems such as the outage map in order to better serve its customers.”

PSEG Long Island dealt with two major storms which hit within two weeks of each other in late January and early February. Clear across the country, Portland General Electric (PGE) in Oregon has faced off with five traumatic weather events since October 2016, which cut power to a combined 225,000 customers and ranged from freakish wind blows to an ice storm and a record snowfall.

In Texas, CPS Energy responded to a flurry of tornadoes that toppled two transmission towers and severely damaged two others, perhaps beyond repair, in late February.

So how did all of these utilities do? Pretty well, they say, considering the enormity of their disaster response and damage assessment challenges and how quickly they responded. Below are their stories, praises and self-criticisms on just how they forecasted, prepared, staffed, assessed and responded to the crazy winter of 2016-17.

Portland is known by outsiders as a place of much gentle rain, pleasant summers and beautiful vistas from the Columbia River valley to Mount Hood. But the fall and winter came in like a lion and rarely quit roaring at the City of Roses. Primary utility PGE was tasked with responding to five storms which offered a devilish variety of weather including 53-mph winds that knocked out power to 86,000 customers (Oct. 13-15), a combination wind-snow and ice storm that took out 25,000 customers (Dec. 8-12), another wind storm that caused 20,000 outages (Jan. 3-4), a hard-descending freezing rain that closed streets and cut power to 16,000 (Jan. 7-9), and, finally, the record Jan. 10-13 snow storm that dumped about 13 inches when only three was expected. This resulted in 1,000 wires down, closed Interstate 84 and U.S. 30 and pushed crews out into 14-degree weather overnight.

This winter of discontent has been hard on PGE storm response planners such as Jay Jewess and Larry Bekkedahl. Jewess’ job is to assess the extent of the damage and orchestrate the utility’s incident command center when needed. He is from the Midwest, where you can often see a storm coming up from the Plains or Great Lakes many days ahead, but Portland’s presence nestled between the Pacific coast, the Cascades and the Columbia River Gorge makes for some forecasting challenges.

“We normally have a few days’ lead time, but the predictive models for impacts don’t normally tighten until a day or two in advance,” Jewess recounted. He’d like to have his teams adequately geared up and ever alert for every potential storm but “I’ve got to be pretty selective or otherwise I’m going to burn people out. It’s a balance.”

In Portland’s forested beauty also lies one of its greatest dangers to the grid. PGE has about 863,000 customers and, once every three years, it must trim back about that many trees.

“We can’t underscore the effect of trees,” said Stan Sittser, a PGE spokesman. “We love our trees, but they don’t always love us back.”

In a fall-winter weirdly out of balance, Jay’s team was forced to call in its Western Mutual Assistance agreement for three of the five storms. This brought utilities throughout Washington state and Oregon together to discuss how they could help. Those companies sent crews to help reconnect lines, fix transformers and other various jobs.

Bekkedahl’s job is to mobilize and direct the outage restoration efforts among PGE’s line crews and other support services. His team and the unit led by Jewess talked several times daily to coordinate outage maps and crew rollouts that must take into account whether workers could even get out of their own neighborhoods.

These are questions that demand answers. Response efforts are better than they’ve ever been and are constantly improving. Corporate communication is out in front with the news stations and papers, while social media is ever connecting with customers. PGE has an online outage map that details the status of system failures, helped by advanced metering infrastructure (AMI) that quickly picks up the exact location of outages, Bekkedahl said.

Many times there are lapses in reporting back from crews on the scene, because they’re trying to do their jobs while also updating the communications team.

“They’re trying to assess how many poles they have down, how many transformers are down, and trying to make a quick on-the-spot estimate and report that back,” Bekkedahl said. “We certainly stress that we want crews to stay focused on the work,” he said. And yet “many customers want to know.”

PGE’s Jewess, Sittser and Bekkedahl are proud of what their teams have achieved and how customers helped during this storm system. They remember specific incidents, such as when a mobile transformer went down at a substation they were nearly finished rebuilding in Estacada, Oregon, during the October storm.

“We were just a few days from re-energizing the substation when that mobile transformer failed,” Sittser recalled. “We worked with the wonderful people at Eagle Foundry who agreed to a voluntary shutdown in order to keep the town powered up.”

Heavy rain, wind and snow all assaulted various parts of Long Island, Suffolk Country and the Rockaways in the early months of 2017. PSEG Long Island dealt with two separate storms that knocked out power to more than 60,000 customers. Pappas, the utility’s spokeswoman, noted that preparation once again was key, ensuring that needed materials were stocked up, crews were mobilized and the media and customers alerted to the latest outages. This approach helped it respond to both the Jan. 23 heavy rain and wind storm as well as the early February snow and wind.

“Communication is one of the most important aspects of storm restoration and it has become one of PSEG Long Island’s essential tools,” Pappas said. “In the past year, PSEG Long Island has updated several key pieces of technology in order to better communicate with customers during a storm. The utility has learned that customers want to be updated on their outage, whether it is good or bad news. Customers are more satisfied if they receive notice that they will be out of power longer as opposed to not receiving an update at all.” 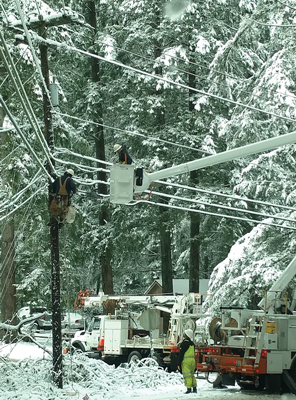 Customers who enrolled in the utility’s MyAlerts texting service received periodic updates and could access the online, mobile-friendly outage map. Specific information, such as the type of crew assigned to the given job, the current status of that effort and the cause of the outage, were presented on the map.

“Customers can access the outage map from any device and will be able to see the number of current outages across the service territory, in their town or even in just their village,” Pappas said.

In the San Antonio region, CPS Energy also learned the value of hoping for the best but preparing for the worst. Rudy Garza, senior vice president for CPS’ distribution services and operation, said the utility runs readiness drills to train its teams on how to respond to extreme events like the occasional tornado. This proactive approach helped it achieve a 51-hour recovery time that restored all 84,000 customers affected by the February twisters.

Paul Barham, CPS senior vice president for energy delivery services and Garza’s counterpart on the transmission side, noted that the storm took down a 345-kV double-circuit line when two towers failed and two others were damaged so badly they will likely require replacement. Garza said his side experienced 290 cases of wire down, and replaced more than 100 poles and cross-arms and 75 transformers. The biggest street-level job, initially, was trees, as always. 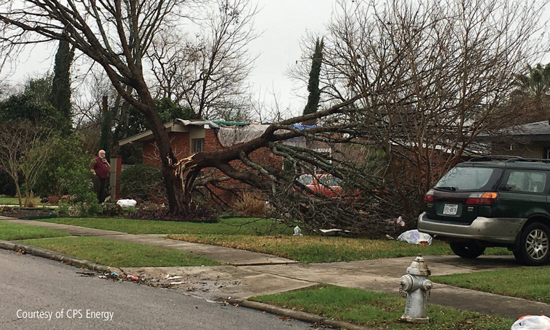 “The biggest challenge for us was clearing trees and debris to allow our overhead crews access to our overhead circuits,” Garza said. “We accomplished this by bringing in our underground civil and electric crews along with our vegetation management team to work ahead of our overhead crews to reduce our response time. We weren’t just trimming trees. We were clearing walls, roofs and other debris out of the way, as well.”

Management personnel were utilized to work alongside crew foremen in the assessment of damaged areas. This gave CPS a second set of eyeballs on the situation and conspired to put the best recovery plans forward both to ensure restoration and safety.

“Our No. 1 rule in everything we do is to ensure safety of both the public and our personnel,” Barham said. “This comes before getting the power back on. We continually reiterate to our crews that every job will be done in a safe manner, even if it takes a little longer. This is also reflected in our handling of reports of wire down. We treat everyone as a priority and have personnel identified specifically for that task.” 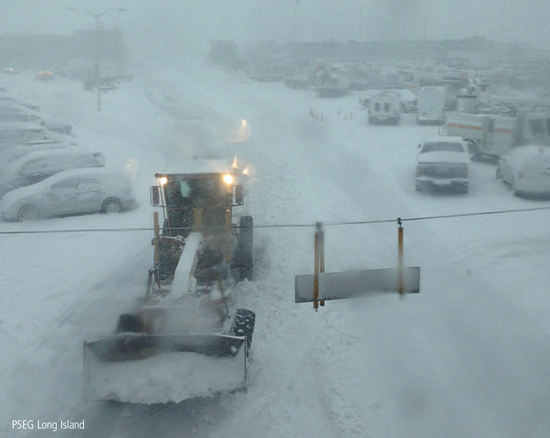 When the Clouds Fade

And sometimes it’s the personal touch that strikes the most ardent memory. PGE’s Bekkedahl recalled the positive community meetings with customers after the storms. There was the story of a crew member who gave a pair of shoe chains to a 92-year-old man so he could cross the icy street. Times like that make it all worth it. And seeing it all in the rear view mirror is even better.

“To be able to walk away from this many storms is fantastic,” he said.