The projects range from community solar gardens, like the ones at Farmers Electric Cooperative in Kalona, Iowa, where members may purchase a solar photovoltaic (PV) panel or even a portion of a panel, to solar water heating projects like the one at Valley Electric Association Inc. (VEA) in Pahrump, Nevada.

Farmers Electric’s 800-kW, 2,900-panel Eagle Point 2 solar garden is the largest solar farm in Iowa and includes all made-in-the-U.S. components, according to the Solar Electric Power Association (SEPA). The 4-acre solar garden opened in July. Eagle Point Solar of Dubuque built and owns the farm, and Farmer’s Electric will buy the power and take ownership of the project after 10 years.

At VEA, more than 850 solar water heaters have been installed throughout the service territory.

“By offering unique, consumer-friendly financing, the program provides solar water heaters to any residents who would otherwise be unable to afford the technology,” VEA said in a statement. “This successful program has also inspired other utilities across the nation to pursue similar endeavors that provide communities with improved access to energy-saving technologies.”

In addition to the solar water heater program, VEA is developing a 15-MW solar energy generation project in southwestern Nevada. The project will generate enough electricity to supply 2,032 homes. VEA plans to acquire power for the project through a long-term power purchase agreement. Several megawatts of energy also will be allocated to a community solar program that will allow members to invest in the project and reap the benefits, according to VEA.

The solar projects in Nevada and Iowa are just a sliver of co-op happenings across the country. As of October, member-owned, nonprofit co-ops had some 95 MW of owned and purchased solar capacity, and they’re planning to add some 144 MW more by 2017 for a total of nearly 240 MW in 34 states, according to the National Rural Electric Cooperative Association (NRECA). The association represents the nation’s more than 900 private, nonprofit, consumer-owned electric cooperatives that provide service to 42 million people in 47 states. 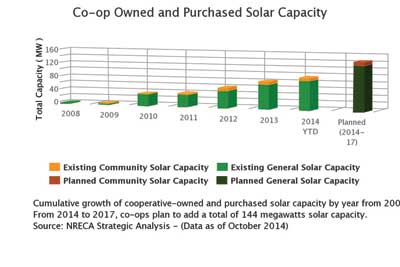 The decreasing cost of solar also plays a major role. Just a few years ago, many rural electric cooperatives overlooked solar power because it would have been unprofitable.

But the price of distributed solar PV systems fell as much as 19 percent nationwide in 2013, according to a report by the National Renewable Energy Laboratory. The report shows that the downward pricing trend is expected to continue through 2016. Other key findings include:

à¢—ª Modeled utility-scale PV system prices fell below $2 a watt in 2013. In 2014, the decline continued to roughly $1.80 a watt-59 percent below what modeled pricing showed in 2010.
à¢—ª A roughly $2 a watt difference exists between the median reported price of the lowest- and highest-priced states for residential and commercial systems (less than 10 kW in size). The story is similar within individual states.
à¢—ª Analysts’ PV pricing estimates are wide-ranging, but many analysts predict long-term pricing in line with the targets set by the SunShot Initiative for 2020. At these pricing levels, PV is expected to reach widespread grid parity in the U.S. with zero subsidies-federal or state.

The SunShot Initiative is a national collaborative whose goal is to drive innovation that makes solar energy cost-competitive with traditional energy sources by 2020. Through the SunShot Initiative, the Department of Energy supports efforts by private companies, universities and national labs to shrink the cost of solar electricity to 6 cents per kilowatt-hour.

Electric cooperatives have another ally in the U.S. Department of Agriculture (USDA). The department has funded more than $1 billion in renewable energy projects since 2009.

Agriculture Secretary Tom Vilsack in one of his blogs touted the department’s loan program for renewable projects at cooperatives.

PSREC serves Plumas, Sierra, Lassen and Washoe counties in California. The cooperative encourages its members to install solar PV panels on their homes and businesses and advertises that residential members might qualify for rebates up to $6,000. PSREC also offers net metering to those members who install the PV panels. What’s more, a Go Solar California link on the website offers users tools to estimate their solar system cost, payback and electricity production.

In addition to the member rooftop solar program, PSREC is one of four cooperatives that are working with the Department of Defense (DOD) on solar projects. In PSREC’s case, the pair is developing a 2-MW solar array that is part of the DOD’s Net Zero program. The co-op will own the solar system at the Sierra Army Depot in Herlong, California, and sell the power to the Army.

Putting Solar on the Map

The solar power landscape is changing quickly as more cooperatives commit to installations, yet tracking co-ops that have solar installations or plans to build them has become easier.

In November, NRECA released an Esri-powered interactive website that tracks solar development at electric cooperatives. The tool includes maps, data, photos and video, plus an overview and the newest facts about the increase in solar capacity at cooperatives.

NRECA also has a tool that maps all renewable energy resources at electric cooperatives with options to search by resource and state.

If the experts are correct, solar power is a rising star on the renewable energy stage. It’s certainly on the map. 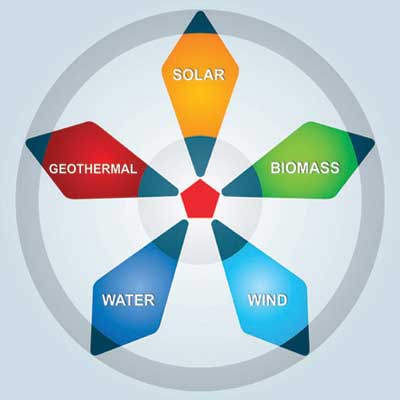 In the past five years, growth in renewable energy at co-ops has ballooned. According to NRECA: