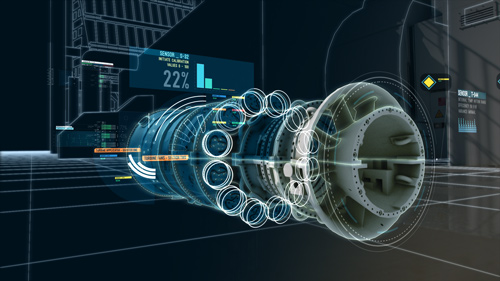 General Electric Co. is shrinking again, becoming a mere shadow of the globe-spanning conglomerate that it was before the Great Recession.

GE said Tuesday that it will spin off its health-care business and sell its interest in Baker Hughes, which provides drilling services to oil and gas companies.

The moves were announced as GE disappeared from the Dow Jones industrial average, replaced by a drugstore chain. GE was an original component in the Dow back in 1896 and had been a continuous member since 1907. But on Tuesday, Walgreens Boots Alliance Inc. took its spot in the stock index of 30 blue-chip companies.

The committee that picks Dow components wanted to add a health-related stock to better reflect the overall economy, and one that was stronger.

The news underscored how radically GE — and the global economy — have changed in less than a decade.

GE traces its roots to Thomas Edison and the invention of the light bulb, and the company grew with the American economy. At the start of the global financial crisis in 2008, it was one of the nation’s biggest lenders, its appliances were sold by the millions to homeowners around the world, and it oversaw a multinational media powerhouse including NBC television.

The company became almost unmanageable. Former CEO Jeffrey Immelt once said its portfolio was too broad and too opaque. “One business had no idea what another business did,” he bemoaned.

Since the recession, the company has been selling assets, with the latest divestitures coming after a yearlong review by CEO John Flannery.

“Today marks an important milestone in GE’s history,” Flannery said Tuesday. He vowed to give the company more of a high-tech and industrial look, and to make GE simpler and stronger by focusing on aviation, power and renewable energy — businesses that he said are poised to grow.

“We have changed many things, but the essence of GE endures,” he said on a conference call with analysts.

GE will sell about 20 percent of its health-care business and distribute the rest to its shareholders over the next 12 to 18 months. It will take up to three years to sell its two-thirds stake in Baker Hughes, valued at around $23 billion.

The company said the moves will lower its debt by $25 billion and reduce risk.

Flannery vowed when he became CEO just over a year ago to divest $20 billion in assets. The company said those sales are essentially complete.

GE shares jumped nearly 8 percent to close at $13.74. It was their biggest one-day percentage gain since April 10, 2015. Before Tuesday, the shares had plunged 60 percent since the start of 2017 despite efforts by Immelt and then Flannery to reverse the slide. The slump wiped out more than $160 billion in shareholder value.

When Immelt announced last June that he would retire, shares gained 4 percent but that turned out to be just a pause. Things got worse for GE in January, when it disclosed that the Securities and Exchange Commission was investigating the company’s accounting after a $6.2 billion loss in its insurance business. In April, retirees and union workers picketed outside GE’s annual meeting.

The company has been plagued by inconsistent results across its sprawling divisions. GE’s aviation business has soared on strong demand for jet engines, but its power unit has suffered declining profit, and GE now plans to pump another $3 billion into its GE Capital finance business next year.

On Monday, GE said it agreed to sell its gas-engine business for about $3 billion, and it previously agreed to merge its 111-year-old business of building railroad locomotives with Wabtec in a deal to raise $2.9 billion for GE. The company is still trying to sell the lighting business that Edison started.

If Flannery’s strategy is realized, the company will shrink to four divisions from eight a year ago. It will be even more removed from consumers, catering instead to other big companies like airplane makers and utilities.