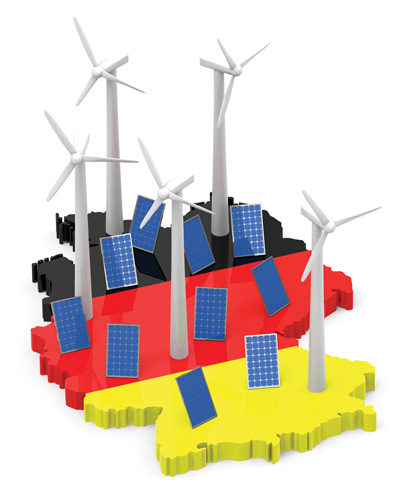 Despite that the German electricity distribution system has high reserve capacities and can host additional generation, integrating renewables is limited by the need to maintain voltage levels within a tightly defined range.

Fluctuations in wind speed and cloud cover challenge grid operators and generators alike. And with millions of small and fluctuating generators’ feeding into distribution grids below 132 kV, there is a growing need to look for new technological solutions to enable distribution systems to cope.

The conventional ways to boost capacity are to perform grid enhancements, change the topology of the grid or new installations. Alternatively, voltage regulation and reactive power compensation, energy storage or intelligent solutions such as wide-area control, load management, control of generators and other solutions can ease the load on the network.

In Germany, voltage levels limit capacity of most grids, especially in a system where many renewable energy generators operate.

Germany’s legislation is catching up with the growth of distributed renewables. Operators of generators connected to the medium-voltage grid must comply with technical guidelines from the German Association of Energy and Water Industries (BDEW). Generators connected to the low-voltage grid must comply with the VDE network connection regulation, VDE-AR-N 4105.

Plus, the German Renewable Energy Act of 2012 requires solar photovoltaic (PV) generators with capacity greater than 30 kW to participate in the DSO’s feed-in management, enabling the DSO to reduce active power.

At the European level, a new set of network codes has been prepared by the European Network of Transmission System Operators for Electricity (ENTSO-E) and is in the process of being ratified as European law.

Last, the very high penetration of distributed and renewable energy resources will require a new system approach for the whole energy system over all voltage levels, according to the German Energy Agency’s “Ancillary Services Study 2030.”

Recognizing that the landscape is changing and no single solution exists to help operators maximize capacity, ABB has carried out pilot projects in cooperation with DSOs and academic partners.

In the past when centralized power stations fed electricity out through transmission and distribution networks from high voltage down to low voltage, it was simple to calculate load flows and voltage levels. But today’s picture is more complex with distributed renewables and loads connected at the same levels, leading to challenging consumption and production scenarios associated with voltage drops and rises. 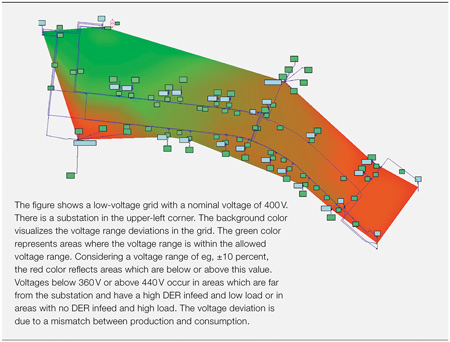 Software tools are becoming increasingly important to determine whether a generator can be connected to the grid without violating its limits. These tools enable engineers to create computer models of the network to be mapped, taking account of feeders, loads and generators. The result is a visual representation of the grid that can be analysed to identify areas where voltage is outside the desired operating range.

One such tool is Neplan software, which has a module to enable a DSO’s planning function to react quickly to customer requests to connect their generators to the grid. By simulating the impact of a new generator, the DSO quickly can evaluate the impact on the grid and react to the customer’s request.

The figure above shows a 400-V grid with a substation in the upper left corner. Green shading indicates the voltage is within the allowed rating (within 10 percent of 400 V), but red indicates the voltage is outside this window. Typically, the red areas show a mismatch between production and consumption. This means either there is high infeed from distributed renewables together with low load or there are areas with no renewables and high load.

In 2011, ABB installed a PCS100 AVR (active voltage regulator) on RWE Deutschland’s grid. The project demonstrated that the power electronic AVR could stabilize voltage levels in the 20-kV network and at 20-kV/0.4-kV transformer stations. The result was increased grid capacity to host distributed generation, which led to cost savings as a result of investment postponement. Between 2010 and 2013, ABB then installed 10 PCS100 AVRs on DSO networks at 20-kV/0.4-kV transformer stations. 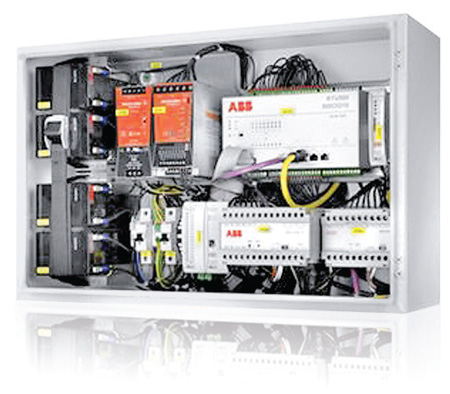 After analyzing these units, ABB concluded that distribution networks require a less demanding level of active voltage regulation than critical industrial applications. Instead of using a power electronic converter as the variable voltage source for voltage regulation, DSOs can opt for a version using mechanical switches. The line voltage regulator (LVR) for low-voltage or medium-voltage grids can be placed anywhere along a radial line in the grid. An MV-LVR installation is in operation at Westnetz in the Eifel.

In Bavaria, the region’s high penetration of renewable energy generators put pressure on the capacity of grid infrastructure on the network operated by Netze BW and EnBW ODR. During the RiesLing project ABB developed a new set of solutions to optimize assets and further embed voltage regulation. 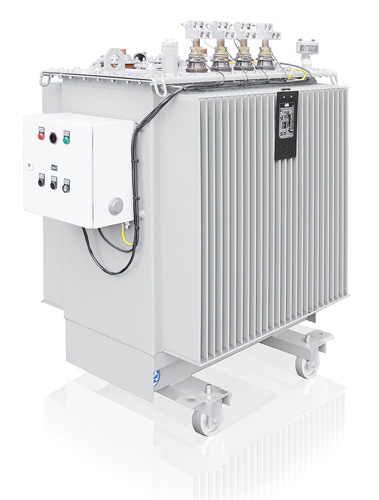 The first of these is a remote monitoring and control unit for intelligent secondary substations. Called FIONA, the unit eliminates voltage measurement at the 20-kV side of a 20/0.4-kV transformer station and substitutes it using values calculated from measurements taken on the 400-V side. This gives accurate voltage readings while avoiding the installation of an expensive voltage transformer on the 20-kV side. In addition, a PCS100 AVR ensures that the low-voltage grid is maintained within the allowed bandwidth.

The project also integrated advanced communication and predictive operation features, which predicted congestion on the 20-kV level. The DSO can then use a change of grid topology or a method of demand response to mitigate congestion.

To overcome this, ABB has developed a smart planning approach that uses a step-by-step approach to help DSOs. After classifying where the voltage might reach its limit, voltage is measured or derived using a grid calculation. By observing the voltage level, a DSO will be able to act to extend the secondary substation, potentially with a voltage regulator or voltage-controlled distribution transformer.