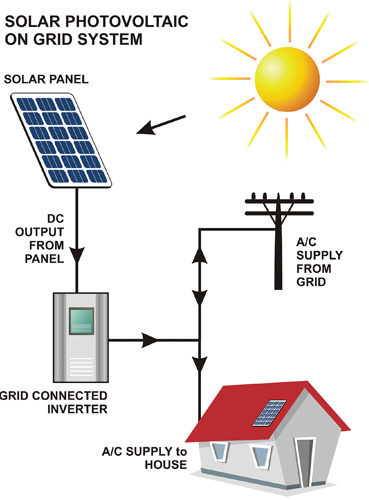 Think back to the largest power outage in North American history. It left some 50 million people in the dark on August 14, 2003 and took down 61,900 MW of load in eight Eastern U.S. states and the Canadian province of Ontario. The financial impact was as high as $10 billion in the U.S. and $2.3 billion in Canada. When government researchers from the two countries examined the event, they reported that one of the key contributing factors to this outage, as well as many other large outages, was a severe shortage of reactive power, which failed to maintain voltage along major power routes.

So, here’s the big question: What happens when the challenges that already exist with reactive power are compounded by the increasing penetration of photovoltaics (PV)? According to the Solar Energy Industries Association (SEIA), the U.S. installed 7,260 MW of solar PV in 2015 to reach 27.4 GW of total installed capacity. This is enough to power 5.4 million American homes and marks the biggest year ever in the history of solar. GTM Research projects that in 2016 the U.S. solar market will grow another 119 percent, driven by many factors, not the least of which is lower costs. In fact, GTM Research says utility-scale solar has reached cost parity with natural gas generation in the U.S.

When rooftop solar installations result in localized voltage headaches for utilities, will there be enough local reactive power to bump that voltage up? How can utilities manage the net load variability and overvoltage risks that large quantities of PV distributed generation (DG) pose to grid reliability? 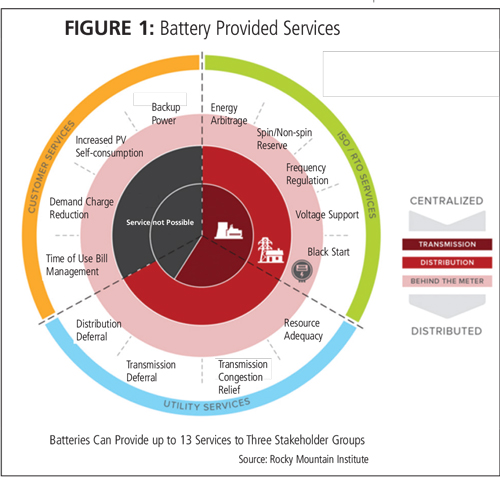 What So Smart About Them?

A smart inverter is like a traditional inverter in that it’s a device that converts direct-current (DC) voltage into alternating-current (AC) voltage. Any solar asset or battery storage device that is tied to the grid must have an inverter, regardless of the chemistry behind it, as all solar systems and batteries are DC-based.

An inverter is made smart using the same parameters that make advanced meters smart: computing power and communications capability that accommodate bi-directional flow.

Smart inverters are crucial to the modern grid because at the heart of the power-delivery game, utilities and system operators provide customers with three things: Voltage, frequency and reliability. Furthermore, that last item in the trio-reliability-is affected by disruptions to voltage and frequency.

The good news about frequency is that it’s system-wide, meaning that it’s the same throughout any interconnected power system, so if the frequency is 60.2 hertz in San Diego, it’s also 60.2 hertz in Vancouver, In addition, if it goes down in San Diego, it goes down in Vancouver, as well. Plus, frequency is relatively slow moving because there’s plenty of inertia in today’s power system, which is largely supplied by turbine generators with thousands of tons of rotating mass, a mechanical means of storing energy.

So if frequency does start to go down suddenly, it might go down half a hertz in a second, which is relatively slow. Meanwhile, the governors on the generators will jump in to correct any problem that arises. In fact, utilities have 30 minutes to restore interchange targets and stay in compliance with standards from the North American Electric Reliability Corp. (NERC).

Voltage, on the other hand, has no inertia. A sudden drop in generation, which happens with the variable generation of renewables, will drop voltage instantly. Even neighborhood-by-neighborhood cloud cover can create instability if there’s enough solar on the local feeders.

Another problem is ride-through …or the lack of it. IEEE Standard 1547 requires inverters associated with distributed PV systems to continuously monitor the grid for voltage and frequency levels. Many regulatory bodies mandate that PV systems disconnect when voltage or frequency abnormalities occur. If a large number of PV systems disconnect simultaneously, a sharp reduction in generation and voltage can occur.

In addition, voltage isn’t carried through the entire interconnection power system. You can have high voltage in one neighborhood and low voltage in another. And, voltage is corrected with VARs, which don’t travel well without creating inefficient line loss. That means volt/VAR balance must be maintained locally by areas.

Synchronous motors and synchronous condensers can create VARs. So can generators, capacitors and certain types of loads. Another source of VARs is smart inverters that will either absorb or consume VARs, whichever is needed-day or night.

VARs can be added into the power system at any point on the system but, as noted earlier, it is best to generate VARs locally to minimize loss. Smart inverters can be programmed to proactively address VAR degradation. Existing to counterbalance voltage increases that accompany strong solar production, inverters subtract reactive power when the output on associated PV exceeds 50 percent of capacity. Because reactive power pushes real power through the inductance of lines, this brings voltage down when large amounts of solar generation raises it.

When connected to a communications network, such as the Symphony by EnbalaTM distributed energy resource management platform, smart inverters can respond to signals from the utility and charge or discharge storage facilities in response to grid needs. Such software allows for centralized control by the utility or ISO/RTO, which directs the local action taken by inverters and other DERs that are aggregated to meet grid needs.

Given the projected rise in solar power over the next several years-combined with eye-popping growth forecasts for behind-the-meter energy storage and other forms of distributed energy resources (DER)-smart inverters are a smart idea, and mandating smart inverters is a smart move.

Germany learned about the need for smart inverters the hard way. Once the country’s generation mix included some 30 percent of intermittent renewable resources, voltage problems became so widespread, regulators mandated smart inverters for new and existing systems. The price tag for retrofitting systems sized between 30 kW and 100 kW was estimated to reach $300 million. Here in North America, we have the chance to avoid that mistake.

When it comes to U.S. solar installations, California is the leader. In December 2014, the Golden State became the first state in the U.S. to mandate smart inverters for rooftop solar installations. That was a wise move because, according to the U.S. Energy Information Administration (EIA), California is the first state to produce 5 percent of its electricity consumption from solar power. Some 2,300 MW of small-scale solar capacity tops California homes and businesses, according to the California Public Utilities Commission.

Runner-up state Arizona produced one third the solar produced in California in 2014.

Although California’s solar production is nowhere near Germany’s 30 percent renewables penetration, state regulators showed good sense in getting smart inverters out on the grid before all that solar could create big problems. Why? Because even having 10 percent of the power on a feeder produced from solar panels can disrupt voltage and introduce grid instability. Smart inverters also help stabilize voltage fluctuations.

Solar panels aren’t the only behind-the-meter resource with smart inverters that can support grid services; storage also has this potential. Navigant Research predicted early in 2015 that distributed energy storage will from grow from a $450 million industry now to $16.5 billion in 2024. The favorable returns on investment (ROI) that storage systems can present were covered in-depth through a recent Rocky Mountain Institute (RMI) paper titled “The Economics of Battery Energy Storage.”

“Most batteries today are deployed for a single, primary purpose, such as demand-charge bill reductions for commercial utility customers,” said Jesse Morris, a manager with RMI’s electricity practice and a coauthor of the report. “Delivering that primary service only uses the battery 5 percent to 50 percent of the time-that’s like building a hotel and only selling up to half the rooms. You’re under-utilizing the asset and leaving tremendous potential value on the table.”

To see how much value battery energy storage could provide if it were used for multiple purposes, including grid services, the RMI team calculated ROI of four different use cases that took into account the many variables, such as local electricity rates and demand ratchets, regulatory and market conditions, technical variables, dispatch constraints and more. The uses cases examined:

“- Residential bill management in Phoenix and solar self-consumption in San Francisco. Here, again, ISO/RTO support made up the secondary uses for both of these hypothetical installations.

In three of the four cases, researchers found that the batteries could deliver solid ROI over a 20-year timeframe, even when batteries were replaced after years seven and 14.

Already, behind-the-meter energy storage is beginning to be used for real-time grid services. In September 2015, Stem teamed with Pacific Gas & Electric to bid aggregated customer storage into the California ISO real-time energy market as a demand-response resource. Although still in pilot, the initiative demonstrates the enormous grid-support potential inherent in control and dispatch of aggregated storage devices.

DERs are here to stay … and proliferate. Teamed with smart inverters and a robust, multi-purpose communications and control platform, these grid-edge assets could be the thing that saves the grid, not sinks it.

It is, therefore, time to rethink traditional demand response and shift to DER management that can address the many issues presented by grid-edge generation. DERs challenge grid operators with the variability of renewables and all the power-quality issues intermittent generation can cause. Given ramp rates, using centralized generation for renewable firming can result in inefficiency and outright waste.

To combat issues like these, grid operators need DER management that runs 24/7 every day of the year. They need to think about calling on DER management continuously and in varying degrees, not just the on-off version of traditional load shedding.

By combining many different types of DER-loads, smart inverters and storage devices-into one centrally coordinated network, utilities and plant operators can get a higher degree of precision in demand management than most now believe possible. In addition, control is just a part of the value in this methodology. By programming in customer constraints and needs related to operations, demand-charge mitigation, maximum use of on-site generation resources and other customer-focused variables, the platform can serve the grid while also optimizing DERs for customer stakeholders. It’s a win-win approach.

This is the future of demand management.

Malcolm Metcalfe, LVO, P.E., is the founder of Enbala Power Networks and serves as its chief technical officer. Metcalfe has more than 30 years of experience in various industries, including BC Hydro, Shell Canada in Toronto and CP Air. Working for Shell, he was appointed Executive Director of the Governor Generalàƒ­s First Canadian Study Conference, a legacy project that was initiated by the Rt Hon Ed Schreyer, when he was Governor General of Canada. In 1999,. Metcalfe left the airline planning to retire and consult. In the same year, he was recognized by Queen Elizabeth, who made him a Lieutenant of the Victorian Order (LVO) and he was recognized for charitable work. He holds a Bachelor’s and Master’s of Science degree in electrical engineering, with the latter specializingin power systems, from the University of British Columbia.