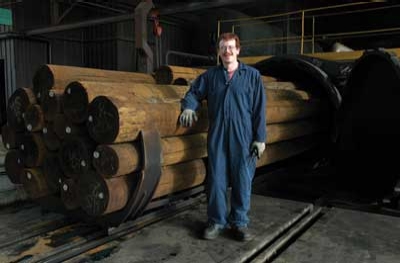 Piece by piece across the United States, the ingredients of a smart grid—a 21st century improvement to the power grid that uses real-time monitoring to improve efficiency, reliability and economy—are coming together. What technology is already in play? What must be developed, and how can national laboratories such as Argonne help put these pieces together?

What we must recognize first is that the grid is already smart. Our system already has many smart technologies built into it, but the grid is not taking advantage of its full potential.

The first step to improving the grid is gathering more information: We must draw measurements from every power line and feed that data into software that can synthesize it. The U.S. has millions of miles of transmission and distribution lines, but they’re primarily used to transport energy, not information. Although some sensors with data collected in utility dispatch centers already exist, room exits for much more information to be transmitted far faster.

Wider deployment of phasor measurement units (PMUs) would jump-start that process. PMUs typically measure voltage and current information 30 times per second, providing valuable data in real time. A few hundred are deployed around the United States today; a minimum of several thousand must be deployed to have a wider impact on the grid. The current number of PMUs is low because they are expensive, but their numbers will rise if production increases enough to cause the manufacturing price to fall. In addition, utilities first can deploy PMUs in strategic places to maximize benefits.

PMUs, however, are just one aspect; the whole information- and data-sharing system from all parts of the grid must be improved. Less sophisticated sensors also can be helpful; they must be integrated, along with improved software, for a system that operates like a finely tuned machine.

With more computers, sensors and better software, utilities can assemble a more complete picture of what’s happening across the grid in real time. This allows their systems to react more quickly to changes in load and system topology and to interact more effectively with the demand by providing real-time information (e.g., price signals) to consumers, who would be able to modify their consumption. Most of this interaction on the demand side can be performed automatically using computerized energy management systems at consumer locations.

But improving the information technology system is just the first step.

Large-scale energy storage will change how the system operates. Now, utilities’ ability to store power is limited. Pumped hydro storage, which is the most common, requires a geographic location with two reservoirs at different elevations—a limiting factor in, say, flat Illinois. Other energy storage technologies, such as batteries, flywheels and compressed-air, exist as scattered pilot projects or are just starting to enter into power systems. For example, the U.S. has only about 20 MW of battery storage now, mostly held in sodium-sulfur batteries.

Large-scale energy storage systems that are efficient, durable and cheap could revolutionize power grid operations. Energy storage means utilities can shift a significant amount of load and provide a substantial operating reserve—a capability with the potential to improve enormously the efficiency of system operations.

Utilities must maintain a razor-sharp balance between supply and demand. A sudden surge in demand is hard to follow with a surge of power from conventional generating units. Our current system, which is predominantly thermal, makes it difficult to react to sudden changes because power plants have ramp rate limits and need time to change their power output. Flexibility allows efficiency.

Add energy storage to the mix, and the equation changes. A good battery or flywheel system can release its stored energy almost instantaneously, allowing utilities and consumers to respond quickly to changes in supply and demand. More flexibility allows utilities to waste less energy by keeping fewer conventional power plants in reserve. Stored power can be used during peak hours or to meet sudden demand changes.

Wider use of energy storage systems also will contribute to enabling large-scale use of renewable energy. Variable renewable energy resources, such as solar and wind power, have wide fluctuations in power output. Managing variability can be improved with better resource forecasting, changes in planning and operational procedures, modifications to power markets, enlarging the balancing authority areas to leverage geographical diversity and increased use of storage.

While wind and solar technologies quickly are becoming mainstream generation options, large-scale battery storage technologies for utility applications are still expensive and further on the horizon. Argonne engineers and researchers are exploring the limits of materials—picking chemical compounds apart down to the atomic level—to find the magic combination. Most estimates, however, put breakthrough batteries 15 to 20 years away.

Looking ahead toward those long-term breakthroughs is why government-funded research is crucial. Because most companies want quick returns on investment, long-term research isn’t practical. Argonne and other national labs and universities can conduct higher-risk research that is neither attractive to nor economical for private industry. Companies come to Argonne to collaborate because the research is complementary—their studies focus on the short-term while Argonne’s looks several steps ahead.

In addition, many utilities are still separate entities in profits and business operations, so they might not see profit in regional or systemwide research, which government-supported projects and studies can help coordinate. A lot of renewable energy is local; for example, wind power from the West has to cross several states to get to the load-heavy eastern seaboard. Local companies in those states might not be interested in building transmission lines to transport that power because they might get only a small share of profits. Here, government can spur long-term regional planning and coordination for interstate power transmission.

Guenter Conzelmann is director and Vladimir Koritarov is deputy director of the Center for Energy, Environmental and Economic Systems Analysis at Argonne National Laboratory. The center develops new modeling and simulation tools and provides analytical services to government institutions and private sector clients around the world on strategic energy and environmental issues.