More
Home DER-Grid Edge Something New Under the Sun

Clarksville, Arkansas’ 42-acre solar plant is highly visible along Interstate 40 (I-40), its 20,000+ solar panels reflective and geometric. Once inside the plant’s gates, visitors find a surprisingly simple setup: the panels themselves are attached to steel beams, a few wires and metal boxes connected to the city’s grid. The panels are lined up in long rows and installed on a tracking system, following the light from the sun like sunflowers, an oscillating design that allows for maximum energy output. 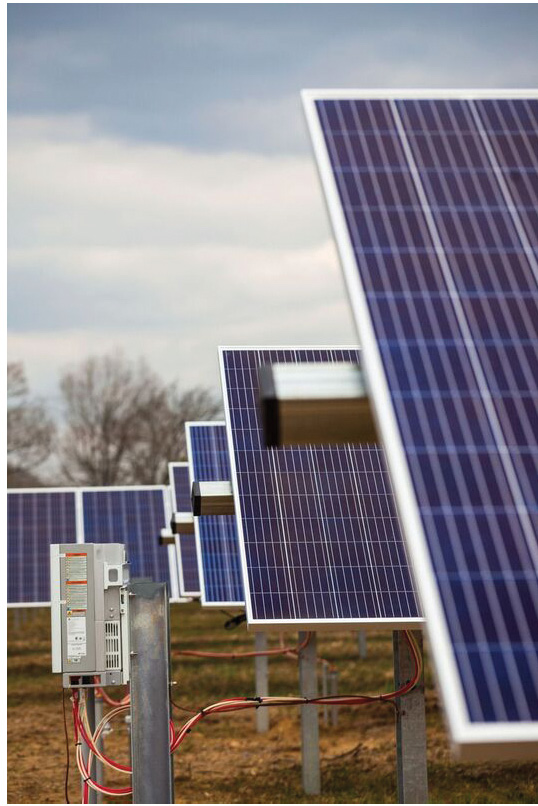 This is the state’s third largest solar plant and its only municipally owned and operated one. According to Clarksville Light and Water, the 6.5 MWt plant produces enough energy for 20 percent of the city’s needs. Clarksville’s saves an estimated $500,000 annually with the solar plant when compared to traditional energy sources.

John Lester is the general manager of Clarksville Light and Water, a position he’s held since 2013. In his office in the downtown municipal building, there is a large screen near his desk connected to a webcam of the solar plant modules, allowing him to monitor the panels and their energy output throughout the day. A former city manager of both Herman, Missouri, and Chanute, Kansas, Lester was the driving force behind the creation of the plant.

When asked what sparked his vision, he explains that while working for a power agency (a group of cities that banded together to purchase power collectively) in Missouri, he saw some members putting in solar plants.

“Knowing the key players,” Lester explained, “I knew the economics had to work or they wouldn’t be doing it.”

Lester began exploring the idea of a solar plant in Clarksville in 2016. “We hoped that by 2018 it would make sense in our budget to start a project,” he said.

Things went much faster than expected, however. The entire plant was operational by December 2017, putting the project six months ahead of schedule.

Solar power is clearly cleaner and more environmentally friendly than fossil-fuel, but what makes Clarksville’s plant unique is its position as a key energy source in a largely energy independent municipality.

Clarksville Light and Water was founded in 1913, operating under a utility commission form of governance. It’s considered a political subdivision of the city of Clarksville, which serves a population of just under 10,000 people. Since the 1940s, it has owned its own electric and water utilities, making it one of only 14 cities in the state that can claim this distinction. At present, the electric utility’s summer peak is over 50 MW.

In addition to the solar plant, the system’s utilities include a 61-megawatt peak electric system, 16 million gallons per day (MGD) water plant, and a 2.5 MGD water treatment facility. And, the utility recently began construction on a high bandwidth and high capacity fiber optic infrastructure that can deliver data at multi-gigabyte speeds.

“Early in the 1900s, when electricity was brand new technology, it was typically large and investor-owned,” Lester said.

The large companies didn’t see the need to invest in rural communities, so Clarksville decided to do it for themselves. Early city leaders knew this would make the city an economic player and give the community an independent and economic freedom other places could not offer. Lester noted that this is one of the main reasons Clarksville could create the solar energy system it has today. He noted there were arguments claiming this venture was too complicated for cities to handle.

“We see the same arguments today around broadband,” he added. “It’s amazing how the same stories stick around.”

For Clarksville, the investment in its own electrical system proved to be a smart one.

“Clarksville is also unique in that we have a separate utility board,” Lester explained. “We don’t report to elected officials.”

He noted that while he doesn’t have to answer directly to politicians, he does communicate with the city council about all plans and decisions. He said that his days as a city manager gave him insight into the reasons elected officials must be risk averse and he notes that it’s easy to get bogged down in the quagmire of city government. Lester said the separate utility board and a forward-thinking city culture gives Clarksville Light and Water the ability to run the company like a business while directing those benefits and revenue back into the community. When asked how he felt about the risk of creating such a plant in a small town he noted that the economics were already clear.

“It wasn’t on the bleeding edge,” he explained. “But yes, for rural American, small town Arkansas, it’s out of the box.”

An equal player in the creation of the plant is former Arkansas Lieutenant Gov. Bill Halter, now the CEO of Scenic Hill Solar, the company that beat out two others to gain the plant’s contract. Halter said that Lester is being overly modest in talking about the leading role Clarksville is taking.

“The easy path is not to do this, to take the same old path,” he explained. But Clarksville, he said, “is leaning in.”

Halter said that when he’s not worked in public service he’s always been drawn to technology companies.

“Right now, this is one of the best opportunities in technology that is beneficial to society, that is cost effective, that I’ve seen in my lifetime,” Halter said. “Clarksville Light and Water is taking a posture designed to enhance their attractiveness for the 21st Century.”

Lester noted that the plant’s location on I-40 certainly wasn’t an accident. And, he added, the municipal board is taking a proactive and open stance toward centering the plant as part of its community marketing, noting the plant’s proximity to a soon-to-be created tech park on I-40. With the city’s strategic position nearly halfway between Little Rock and Northwest Arkansas, it plans to attract the eye of large companies that have increasing sustainability commitments.

“If a town can’t provide renewable energy it won’t be in the game,” Halter said.

While Lester speaks to the city’s goal of attracting outside business, he’s equally interested in showcasing the plant’s direct benefits to the city and utility customers. There’s a bit more expense on the front end, he said, but the savings come from changes in how the energy is created and transferred. Clarksville pays 5.5 cents for 1 kWh of solar energy, which is a slight premium compared to the 5.3 cents paid for energy generated from other sources. The savings come, however, from how the energy is transmitted, especially during high demand. Solar power shaves off energy peak charges saving consumers $250,000 a year.

Halter noted that these savings will be locked in going forward: There are no fuel costs, and no one is charging for sunshine. Unlike gas or coal, solar is not susceptible to the volatility of fuel markets.

“And it’s written into the contract that the city can purchase the plant in seven years,” he said.

To make the investment work for both the company and the city, the contract works like this: Clarksville Light and Water is a nonprofit and thus able to borrow funds at a lower interest rate than the private sector. But, what it can’t do is take advantage of currently available renewable energy tax credits.

“We can monetize those tax incentives in a way Clarksville cannot,” said Halter. “But after seven years, the incentives have fully monetized.”

At that point Clarksville will have the option to purchase the plant at a given price. Owning the asset will bring increased savings that can then be passed along to consumers. It will also bring another layer of energy independence to the small town.

Both Lester and Halter are quick to name the benefits and job creation the construction of the plant brought to the city. The construction process employed more than 120 specific people from the region, Lester said. Jobs included construction positions, electrical work and driving heavy machinery. Once the plant was set up, however, that number changed dramatically.

“There is not a whole lot that is required in the day to day,” Lester said. “In fact, it’s just monitoring and the occasional repair.” This, he said, is another form of savings the city can pass on to its electricity customers.

The feedback from the community has been overwhelmingly positive, Lester said. People around the region have been calling to speak with him about how he brought the plan to life in a rural municipality. Sure, there are misconceptions around how the plant works, on cloudy days for example. But people are beginning to see that solar is in a different league than it was even five years ago.

“The numbers have changed dramatically in five years. There are 20 thousand modules out there,” Halter said, pointing to Lester’s large screen webcam. “And (the price of) those modules have come down 75 percent.”

It’s also easy to maintain and the modules are slated to last for 30-plus years. “The only moving part in the whole plant setup is the tracking system,” Halter said.

Clarksville certainly isn’t the only city accessing solar power. But its local ownership provides a new level of energy independence and savings that can’t be said for other cities. Clarksville’s system is the third largest in the state, but by far the largest municipal.

In most cases, solar plants pass on their savings to the private sector. But due in part to the decisions of city leaders back in the 1940s, Clarksville is entering the world of solar with a greater deal of independence. There is already talk of putting in another plant. Solar is a method of non-extractive energy production that is also an additive to the community.

“Those resources wind up back in Clarksville,” said Lester, “in the local employment and in the local tax base.”

Photographer: Liz Chrisman is a professional photographer who employs her advanced disciplines in design and journalism to be a visual storyteller in a variety of capacities. Most of her post-graduate career has been spent as the director for photography services at Arkansas Tech University and teaching photography courses at the undergraduate level.