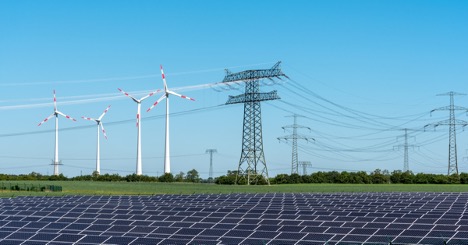 As drought and wildfire risks intensify across the Southwest, utilities are turning to solar, storage and microgrids to bolster electric grid resiliency.

In Taos, New Mexico, Kit Carson Electric Cooperative has two major solar-storage projects in progress that it hopes will provide electrical resilience to nearby customers in case of wildfires.

“This could be the driest summer that we have had on top of the other dry summers,” said Luis Reyes Jr., chief executive of the cooperative. That drought is heightening fire risks and in turn improving the financial case for distributed energy that can operate despite transmission disruptions.

Kit Carson serves electricity to 29,000 members in Taos and two other counties along the Colorado border. Included are four ski areas and the Taos and Picuris pueblos. It’s a place of small towns and roads that penetrate the Sangre de Cristo Mountains like veins and arteries. The cooperative, named for the famed fur trapper and guide who is buried near the central plaza of Taos, has 9 customers per mile of electrical line, compared to perhaps 400 per mile of investor-owned utilities.

Wildfires were uncommon when Reyes was growing up in Taos in the 1960s and 1970s. They remained scarce even after he returned with a degree in electrical engineering in 1984.

Now, as temperatures rise — 0.8 degrees overall in just the last 30 years at Taos — wildfires pose a more menacing risk. Last October, a blaze charred 10,000 acres just outside the Kit Carson service territory. This year, winter produced a subpar snowpack and runoff has been a relative trickle, with many creeks already dry. The remaining snowpack for the Rio Grande, which flows past Taos, was 51% of normal as of May 25.

Drought maps tell the same parched story or worse across the Southwest. Most of California, Nevada, Utah, Colorado, New Mexico and Arizona were already in drought by late last month, and 38% of that area was already classified as exceptional drought compared to none at this time a year ago. Chuck Maxwell, predictive services manager for the Southwest Coordination Center, predicted above-normal fire potential rated as significant.

Reyes said the potential for Kit Carson’s electrical lines to start fires most keeps him up at night. “It would devastate our tourism economy,” he said of the wildfires. Kit Carson crews work year-round to clear trees along power lines. “If we’re going to break the budget, let’s break the budget on tree trimming, so we can sleep at night,” he said.

Fires will likely happen anyway. That has driven Kit Carson’s strategy of creating microgrids. At a site just outside Taos, near a famous bridge across the Rio Grande, 15 megawatts of solar capacity and 12 megawatts of storage capacity are being installed.

Reyes said the location was chosen because it’s near a substation but also because of the value the batteries can provide for critical circuits serving a hospital, firefighters and other important community services in the Taos area.

The second component, 6 megawatts of solar and 4.5 megawatts of storage will be at Angel Fire, a four-season resort community located 25 miles from Taos. It has a population of 900 that doubles or triples during peak ski and summer seasons. As with the Taos Mesa batteries, Kit Carson hopes to learn how to use them to maximum advantage. In both cases, the battery packs are from Tesla.

Kit Carson may add more storage in the coming years. It depends upon lower prices, improving technology, and negotiations that seek to put a price on resiliency. For example, what is the value of the Taos Ski Area having certainty of electricity nearly 100% of the time?

“Everybody talks about resilience. What do we pay for resilience?” Reyes said. “That is the discussion we’re having.”

In most cases, storage will be coupled with solar, as in the deployments this year. Kit Carson began investing in solar in 2005 when it was still relatively expensive and, said Reyes, dismissed by many as “hippie power, so to speak.”

By 2016, when Kit Carson gained its independence from wholesale supplier Tri-State Generation and Transmission, solar was becoming a mainstream technology. Kit Carson, aided by its new wholesale supplier, Guzman Energy, set out to harvest power from the sunlight that has drawn artists to Taos for more than a century. The goal was to meet full daytime needs by 2022. With these two new solar farms, Kit Carson will hit that mark nine months early.

Storage has been a more difficult argument. Prices have now fallen enough that, with multiple benefits, the batteries can be justified. One benefit is from shaving peak demand. Daytime demand peaks of 40 megawatts grow to 65 megawatts in evening hours, which can at least partly be met by drawing on the new batteries. That saves the higher cost of imported energy during evening hours.

Through Guzman, Kit Carson also expects to sell electricity into the market established by the California Independent System Operators, or CAISO. Then there is the benefit in the case of disruptions to supplies such as in the case of high winds or last year’s wildfire.

A well-designed microgrid needs to place stored energy proximate to demand, points out Bryan Hannegan, the chief executive at Holy Cross Energy, a cooperative serving about 43,000 members in the Aspen-Vail-Glenwood Springs area of Colorado.

“Storage has to be co-located not only with the solar PV but with the load/demand it is serving to be truly resilient,” Hannegan said. “Solar plus storage — even a few miles away — isn’t resilient if the wildfire cuts the power line connecting it to you. The closer the resources, the more resilient it is.”

Holy Cross has had good cause to think hard about resilience. A wildfire in 2018 nearly caused an economic maelstrom. Firefighters got to a wooden pole during the Lake Christine wildfire of 2018 just as fire was beginning to burn it. Had it burned, the last transmission to Aspen would have been severed, darkening the resort town during its Fourth of July weekend.

They were inspired by the pioneering work in Hawaii, Hannegan said. There, in early 2019, Kaua’i Island Utility Cooperative went online with 28 megawatts of solar and 100 megawatts of 5-hour storage capacity. Like Kaua’i Island, Holy Cross has a goal of achieving 100% renewable energy. In all cases, said Hannegan, storage makes solar easier to absorb into a utility system, especially when there is lots of solar already on the grid.

But lithium-ion batteries cannot store power for long periods. A paper published in the June 16, 2021, issue of the energy journal Joule laid out the challenge for Holy Cross and other utilities. “We are going to need more than batteries to address diurnal and seasonal challenges of operating a power system entirely on clean energy,” Hannegan said.

In northern Colorado, the Poudre Valley REA doesn’t aspire to 100% renewables by 2030. It does want microgrids, perhaps at all 12 fire stations in its service territory that stretches between exurbs and farms along the Poudre River to the Continental Divide in Rocky Mountain National Park.

The library at Red Feather Lakes had requested help in maintaining reliable electricity as part of its function as a community hub 45 miles northwest of Fort Collins. The Red Feather area is served by one 145-kilovolt transmission line. Grants and other assistance yielded a 20-kilowatt solar system and 140 kilowatts in batteries able to meet the needs of the hamlet of 40 homes and businesses for 8 hours.

In early 2021, the microgrid went live. It’s already proving valuable in shaving electrical needs during evening hours, when electricity to Poudre Valley from its wholesale supplier, Tri-State, costs the most.

The microgrid would have been even more useful last year. A wildfire called Cameron Peak torched 209,000 acres, the most in recorded Colorado history between Aug. 13 and Dec. 10, burning 224 homes and 220 outbuildings. None were at Red Feather Lakes, but power to the community was severed for 8 to 10 hours as a precaution when flames approached.

“This allows us to ensure the resilience for that area,” said Jeff Wadsworth, the chief executive of Poudre Valley REA. It’s not just wildfires, he pointed out. Car and truck accidents along transmission lines can cause power outages. So can snow and other storms. A funnel cloud near Red Feather Lakes was reported in 2014.

While Poudre Valley works with several national labs and Tri-State in how to manage this microgrid, it is also examining prospects for future deployments of batteries. One criterion, said Wadsworth, would be the locations of the 12 fire stations in the cooperative’s service territory.

Kit Carson wants to invest in more storage, likely at all 14 substations. Reyes is unsure when to pull the trigger. Many utilities, like Kit Carson, have begun buying Tesla battery packs now. But will an even better storage technology emerge in the next few years?

Whether it’s chasing 100% renewable goals or confronting the prospect of far bigger, more dangerous wildfires, it’s the question being asked in many places in the Southwest.

Allen Best writes about energy, water and other topics from a base in metropolitan Denver. He began writing about energy, the climate, and their relationship in 2005.

This article first appeared on Energy News Network and is republished here under a Creative Commons license.