North America’s power grid is a vast, intricate machine. It comprises a magnitude of physical assets owned by many different entities which are controlled by an even more complex assortment of regulatory bodies, none of which has total control of the grid. This continues to make the grid vulnerable, especially considering the numerous threats—natural and manmade—that must move it toward a continual state of preparedness. Thus, system reliability has taken on a whole new meaning, especially true when examining the societal costs associated with outages.

A U.S. Department of Energy (DOE) executive report to the President in 2013 estimated an annual cost of $18 billion to $30 billion for weather-related outages. That estimate includes costs of residential, industrial and commercial property repair, loss of business revenue, lost wages, electrical and other infrastructure system repairs. Research firms, like Lawrence Berkley National Labs, published new preliminary findings in 2016 calculated much higher at nearly $110 billion annually. In addition, in a new book published in 2017, “Power Grid Resiliency for Adverse Conditions,” author Nicholas Abi-Samra references recent EPRI and Edison Electric Institute studies that state, “Per EPRI, power outages and other power disturbances cost the U.S. economy nearly $120 billion every year, a large portion of this can be directly attributed to power outages triggered by overgrown vegetation on the right of way (ROW). The 2008 Edison Electric Institute Reliability Report said that 67 percent of electric outage minutes were weather related.”

For years when extreme weather events occur—like Superstorm Sandy in 2012 and our most recent experiences with Hurricanes Harvey, Irma, Maria and Santa Ana wind-borne wildfires—those estimates skyrocket. Consequently, the discussion has shifted from not only getting the power back on after an outage, to how we make our systems more resilient for a faster and less cost-intensive recovery, and more reliable by hardening certain aspects and components of the system to significantly reduce failure of those elements.

There are three very important “Rs”—reliability, resiliency and recovery. It’s important to understand the differences between them when considering improvement and investment in the power grid. Reliability is the all-encompassing end game. Consumers demand it and providers want to ensure it. Reliability is dependent on a vast number of internal and external factors, however, including systems design and the associated processes for operations and maintenance to prevent the outage in the first place. When outages cannot be avoided, the conversation turns to speed of recovery, and the long-term plan for consistency in those recoveries.

Michael Hyland of the American Public Power Association, provided great context for these concepts during The Energy Times December 2017 webinar “Lessons from 2017 Hurricane Wreckage.” Mr. Hyland pointed out what it means to be in recovery mode, and what that has to do to with resiliency. Recovery considers both the near-term—the emergencies that need to be addressed immediately with quick fixes—as well as the long-term, more permanent fixes. This is where resiliency and hardening come into play. Resiliency was described as “the ability to take a punch and get back up,” and hardening as “the ability to take a punch and not go down.” Hardening suggests that infrastructure is built to withstand an event, which equals improved reliability, and that resiliency is designed to get the grid back up and running quickly, which equals improved recovery.

The recent DOE “Staff Report on Electricity Markets and Reliability” also corroborates: “Resilience is typically achieved through hardening or recovery. Hardening refers to physically changing infrastructure to make it less susceptible to damage. Hardening improves the durability and stability of energy infrastructure, making it better able to withstand the impacts of hurricanes, weather events or attacks. Recovery, by contrast, refers to the ability of an energy facility to recover quickly from damage to any of its components or to any of the external systems on which it depends—typically through storage and redundancy. Recovery measures do not prevent damage; rather, they enable energy systems to continue operating despite damage, and/or they promote a rapid return to normal operations when damages/outages occur.”

In short, both hardening and recovery create more resilient infrastructure and improve the currently elusive goal of “perfect” reliability.

Designing new and upgraded power infrastructure with resiliency in mind will take a concerted effort on the part of all stakeholders—from investor-owned, municipal and rural cooperative utilities, to regional transmission organizations, market regulators and government entities like the DOE. Published in 2017, the National Academy of Sciences study titled “Enhancing the Resilience of the Nation’s Electricity System,” puts forth several recommendations. Briefly synopsized, they include:

“- Encouraging the DOE and system operators to work together to evaluate historical operation of the grid and to review technologies, operational arrangements and exercises that improve grid resilience

“- Improving the physical and cybersecurity of the grid

“- Reviewing outages that have occurred, evaluating findings from those outages and sharing best practices for remediation of those outages

Many utilities have already carved a path forward in terms of infrastructure and equipment improvements designed to modernize the grid in their service areas. Duke Energy laid out its plans in a blog post last summer that outlined a proposed investment of $25 billion over the next 10 years in the South and Midwest. These investments will replace aging infrastructure and add 14,000 jobs. The post states that “the goal is to make the system more secure and resilient, decrease outages and enable faster restoration, integrate more renewable energy such as solar and wind, and give customers more choice, convenience and control over their energy use.” The upgrade also includes nearly $5 billion toward undergrounding miles of hard-to-access overhead power lines. Duke says “this will significantly reduce outages and interruptions and can speed restoration.”

In the wake of Hurricane Irma, Florida Power & Light (FPL) has proven that its proactive steps following Hurricane Wilma in 2005, to significantly invest to make their portion of the grid “smarter, stronger and more storm-resilient,” has paid off for customers. In a post-Hurricane Irma statement FPL said that “no hardened transmission structures—the backbone of our system—were lost. All of FPL’s substations were up and running within a day following Irma. Hardening helped make the system more resilient and provided for a much faster restoration.”

Various organizations are helping stakeholders make effective, actionable and measurable improvements to the grid. For instance, Sandia National Laboratories has created a Resilience Analysis Process (Figure 1) that calls for “working closely with stakeholders to identify the most crucial potential threats and high-level consequences in their region”then create a detailed system model and evaluate the model against the specified threats to determine system consequences. Finally, identify both planning and operational improvements to the system that minimize consequences and achieve the greatest system resiliency.” 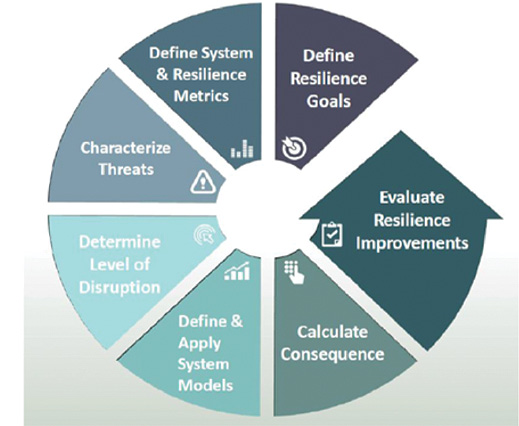 Roadmaps such as these will certainly be a crucial part of building grid resiliency as each entity works solely and through interagency cooperation toward a common purpose of system improvement and enhanced reliability.

It’s time to encourage all stakeholders to work together to enact systematic enhancements to the grid. This will certainly take time and a great deal of proactive planning, decision-making, investment and, most likely, revisions in the regulatory approach. The National Academy of Sciences states it well in its discussion of many potential paths forward and suggests that “even when they (potential solutions) cannot be directly implemented, immediately develop analogous strategies so that when a policy window opens after a major disruption, well-conceived solutions are ready for implementation.”

Considering aging components, ongoing changes in power generation and consumption and the dependence on reliable power that has become more critical to society, upgrading the grid has become an essential goal to pursue. It’s not difficult to conclude that designing resiliency and hardening into electrical infrastructure are the keys to rapid, reliable and repeatable successes in power recovery. | PGI 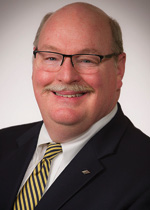 Brent Richardson is Chairman of PDi2. The organization supports the need for greater grid resilience and is working to develop models and data that support a fair and accurate analysis of infrastructure construction options. PDi2 welcomes working with other stakeholders who share this mission. For more information, please visit pdi2.org. Richardson also represents Dow’s business to the utility industry in North America. Prior to joining Dow in 2007, Brent worked for nearly 25 years for Duke Energy. His experience includes many components of the utility business including field engineering, distribution standards, project and product management and marketing. He earned a bachelor of science degree in electrical engineering from Virginia Tech and is a registered Professional Engineer in North Carolina and South Carolina. He is also a senior member of IEEE and the ICC, where he serves as chair of Discussion Group A14D–Cable Standards­–and vice chair of subcommittee A–Cable Construction and Design.

Causes of Most Electricity System Outages

Space weather and other electromagnetic threats

Source: National Academy of Sciences “Enhancing the Resilience of the Nation’s Electricity System” 2017