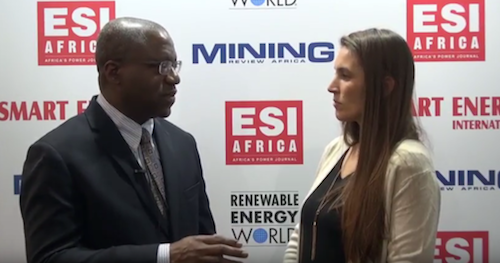 Utility experts flocked to Johannesburg last month and talked how the skies the limit for the future opportunities and challenges of grid expansion and modernization in Africa.

Lawrence Jones of Edison Electric Institute and many others were highlights at the POWER-GEN and DistribuTECH Africa conference July 17-19 in South Africa. In the video below, Ashley Theron, senior content editor for Renewable Energy World’s sister website Smart Energy International, interviewed Jones, vice president of international programs for EEI, about the energy demands thrust upon the globe by 2050 if an extra two billion people join the population as expected.

The energy answer is all of the above-given Africa’s energy assets, Jones predicted.

“I think the energy mix is going to be more diversfied,” he told Theron, saying the keys are reliability, affordability and sustainability. The grid side should include centralized and decentralized power. “The future looks very bright but the future has to be diversified.”

Jones said that grid development will increasingly need public and private partnerships to succeed in Africa. “More and more as we look at Africa evolving, it’s more important to include the customer in the picture.”

Watch the full interview with Jones below.