In the “2013 Global Reputation Leaders Study,” Reputation Institute spoke to more than 300 executives at some of the world’s largest, most influential companies and heard variations on this storyline: As much as reputation leaders (a diverse group, but most frequently the senior communicator, chief marketing officer or the head of business strategy) would like to tell the CEO and board that everything is under control, when it comes to stakeholder relationship management, everything is not under control.

Most companies agree reputation management is important, but few know what they should do about it.

Although 79 percent agree that we live in a reputation economy, an economy where who you are matters more than what you produce, only 20 percent say their company is ready to compete in it. Unfortunately, U.S. and Canadian utilities have not been able to store much reputation capital in recent years, as this is one industry that has weathered the global financial crisis better than most with the general public across North America.

Each spring since 2006, Reputation Institute conducts a syndicated quantitative research study across 34 countries and asks the general public to rate hundreds of organizations on the trust, admiration, good feeling and esteem they have for the largest companies in each market.

This Reputation Pulse score between 0 and 100 is a perception and an emotional response to a company’s ability to deliver on seven rational dimensions of reputation: products and services, innovation, workplace, governance, leadership, citizenship and financial performance.

This article analyzes 11 utilities on both sides of the 49th parallel and how they have been unable to build up enough reputation capital to get out the “sea of sameness” and remain a reputation-challenged industry in 2013. Southern Co. was the only North American utility to enjoy a strong reputation (70.32), and Manitoba Hydro at 62.68 was the only Canadian utility to score above 60, signifying an average reputation. In all, 10 of the 11 utilities included in this special report for Electric Light & Power scored in the average/weak category, with Hydro One at 49.80 bringing up the rear. Five other U.S. utilities—Duke Energy Corp., Exelon Corp., Florida Power & Light Co., Xcel Energy and Constellation Energy Resources LLC—scored within three points of one another in the low- to mid-60s, and the remaining three Canadian utilities—BC Hydro, Hydro-Quebec and Fortis Inc.—were all in the low 50s.

What Drives Corporate Reputation in the North American Industry?

The top three reputation drivers for the utility industry are governance, innovation and citizenship, composing just less than half (47.4 percent) of a utility’s reputation (see Figure 1). 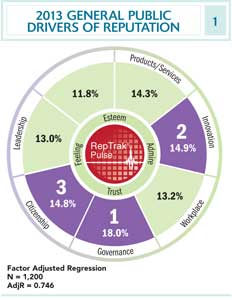 Because of the nature of the products and services they provide, utilities’ corporate reputations are influenced more by how they are run and what they give back to the communities where they operate, pushing governance and citizenship into dual prominence as reputation drivers for the industry. The utility industry is one of only a handful of global industries of the 25 studied by Reputation Institute in 2013 where products and services was not the No. 1 reputation driver for consumers; governance is most important largely because of a lingering BP/Macondo or Tokyo Electric Power Co. Inc./Fukushima effect, which places consumer expectations of the ethics and transparency of energy and utility companies on a higher level than other industries not tainted by recent scandal.

Each dimension alone accounts for more than 11 percent of reputation, and the difference between the leading driver (governance at 18 percent) and the lowest-rated one (financial performance at 11.8 percent) in 2013 is just more than 6 percentage points.

Compare today’s picture to the utility reputation dimension weights back in 2007, when TXU Energy Retail Co. LLC was involved in the largest leveraged buyout in history and most North American utilities were operating in a macro environment of strong economic growth and a bullish stock market. Back then, citizenship (20.5 percent), products and services (19 percent) and innovation (14 percent) were the top three drivers, followed by governance, workplace, leadership and financial performance.

Building a Strong Utility Reputation Through a Systematic Approach

During the past two decades of foundational work with some of the world’s most progressive companies, Reputation Institute has observed four elements that are core to a reputation management system’s rise to the top: business rationale, intelligence and strategy, management and accountability, and integration. Companies that manage their reputations well are working with these four elements in a structured way that brings clarity and focus to their efforts. In return, that tends to enable companies to develop more profitable and more highly respected businesses than companies that don’t.

How does your utility measure up when it comes to the following 16 elements of a world-class reputation management system?