More
Home DER-Grid Edge The World on a Platter

A paradox exists within the electric utility industry—meter vendors and utilities are uncertain about making clear decisions for their “IoT strategy,” yet almost 900 million smart electricity meters will be installed from 2016 to 2023. In reality, smart meters are IoT devices and electric utilities worldwide are some of the leading adopters of IoT technology. 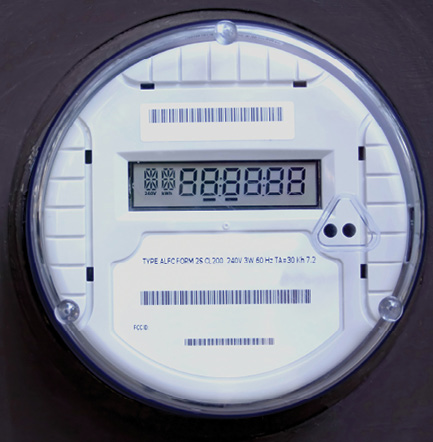 Reaching large-scale adoption of smart electricity meters has been a decades-long process across the world, but the recent development of vendor offered new products such as software and particularly managed services is helping to open new revenue streams beyond just hardware. According to new IHS Markit research, over $1.2 billion will be spent on meter-to-cash focused advanced metering infrastructure (AMI) managed operational expenditure (OpEx) services alone from 2016 to 2023, as utilities take advantage of these new vendor propositions to better achieve their financial return on investment.

This represents clear evidence of electric utilities shifting toward an overall IoT solution and not just a smart meter rollout, even at this early stage.

An IoT solution is only as strong as the weakest of its four pillars, and that holds true for the smart metering proposition where the return on investment comes from the whole solution, not just the hardware.

The central part of this movement toward AMI focuses on the communication network and which particular technology is chosen.

IHS Markit defines a managed service as an opex where the vendor is contracted to take operational responsibility for some part of the solution over time. This is a subset of the combined capital expenditure (CapEx) and OpEx totalling $58.2 billion that will be spent on both deploying and operating AMI-related solutions between 2016 and 2023. Out of the different types of managed services that a utility can purchase from vendors around their meter-to-cash process, 58 percent will be spent on “Network as a Service” (NaaS)—a clear indication of how important this part of the solution is viewed to be.

One of the greatest challenges in winning utility adoption of AMI is choosing the right communication technology. Vendors, utilities and even semiconductor or telecommunications companies are each waiting for a strong direction from the other; waiting for a single solution to “win out.” However, IHS Markit does not expect one single winner to emerge, but instead expects a more regional picture and a mix of best-suited technologies to be adopted for each individual utility.

For example, considering all smart electricity meter shipments to North America from 2016 to 2023, traditional cellular, point-to-multipoint fixed networks and PLC-narrowband technologies each hold about 10 percent market share; only RF mesh achieves higher. A mixture of solutions will be adopted across the market, allowing utilities to choose the one best suited to them.

The rise of alternative business models, in particular NaaS, with minimum-performance based contracts also is helping the adoption of AMI during these times of uncertainty. It lowers the risk of investment for some utilities, allows utilities with little/no in-house capability to adopt new technology, plus lowers the initial cost for those where initial spend can be difficult (e.g. for municipal type utilities). This move towards NaaS is one of the major drivers of the $548 million that will be spent on AMI managed services in Europe and $410 million that will be spent in North America from 2016 to 2023.

As utilities begin to realize that there is not a single, one-size-fits-all communication technology, and vendors continue to bolster their NaaS offerings, overall adoption of smart metering and related spending can only increase.

Where is the value in the utilities IoT spend?

The second aspect to managed services spend is the ability to better focus on the use (and monetization or return) of the data created. The right IoT strategy is not just an issue of which connectivity technology to use, but how to analyze and use the data, too.

While the electric utilities may not realize this, their focus on optimizing the end-to-end return on investment (ROI) of a meter-to-cash focused AMI system is a perfect example of an overall IoT strategy; combining the meter hardware, communication network, software and analytics into a coherent solution, even if not from a single provider. Only 6 percent of the spend from 2016 to 2023 will be on the software and service elements and yet the entire value and ROI of the system relies on this.

Beyond the labor savings from remote meter reading, it is the computation and creation of actionable insight from that resulting data that creates the higher value and maximized ROI from the network and hardware spend. 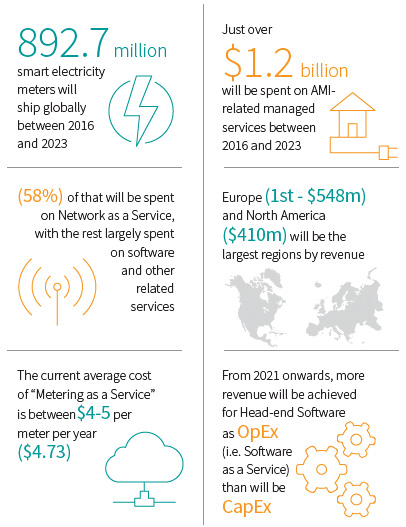 Electric utilities will still invest in AMI systems primarily justified on the meter-to-cash process—but increasingly have the intention of layering new uses and applications for that data on top later in the process.

An end-to-end “Metering as a Service” offering for meter-to-cash AMI could currently cost a utility around $4 to $5 per meter per year. “AMI 2.0″ type solutions, such as use of AMI data within distribution automation (e.g. outage management solutions) as a managed service, could attract 10 times that level of spend when considered on a “dollar per endpoint covered” basis, but can further leverage the same hardware and network spend to achieve that. 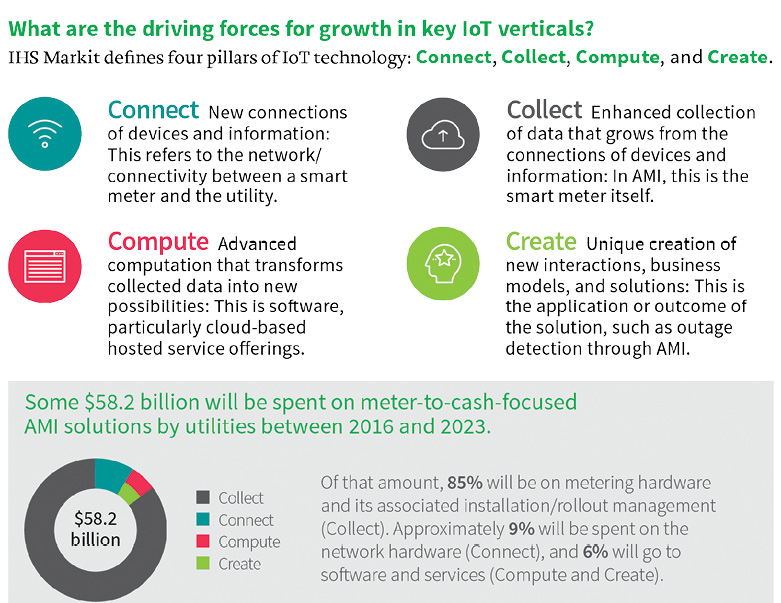 As utilities start to focus their strategy on the overall solution and not just the connection, the rise of “as a Service” business models is helping speed up the adoption, and managed services offer a path of greater flexibility, faster scalability and a lower capex. As a result, many are already moving fast toward the managed services model, despite every utility having its own unique circumstances.

Within this movement, the Software as a Service (SaaS) proposition has seen rapid adoption. By 2021, more revenue will be spent by electric utilities on head-end SaaS than will be spent on one-off CapEx head-end software purchases. By comparison, the tipping point in the balance between OpEx and CapEx will occur even sooner on software within the water utility sector.

In both cases, adoption from utilities in the U.S. and European markets are strong, even accounting for the variation in circumstance between each utility. While the relative adoption of meter data management SaaS currently lags slightly behind that of head-end software in the electric utility sector, the move toward the SaaS model is universal.

More than half of the forecast total managed services spend in North America will be on SaaS products. Looking to the future, the potential upside on AMI 2.0 applications further leveraging the existing AMI hardware and network is then heavily invested on the side of software and analytics too.

One size does not fit all

Despite this optimization and clearer understanding of the IoT proposition by the most forward-thinking electric utilities, general progress remains steady. Utilities will remain cautious and risk-averse (one of the reasons SaaS can be so popular) and many do not want to feel tied to one single vendor’s end-to-end solution for long-term contracts.

Instead, a focus on interoperability and “vendor-agnostic” solutions is winning utility trust and therefore their revenue. The modularity of the solution, especially with the ability to layer new software applications at a later stage of the project, increases the value of AMI solutions to the utilities and the revenue to the vendors.

A future path for IoT and AMI has emerged

The move to SaaS is one of the few trends in AMI solutions to span multiple utility types and global regions, alongside more regionally-focused success of NaaS offerings. Every rule has an exception, but step-by-step the electric utilities are finding a path to a software-centric view of the big picture, as the perception of IoT technology moves on from “Ëœconnection only’ and towards truly connected thinking. The good news follows that the benefits to utilities and spend with vendors then looks set to increase with every new application and re-use of data that can be developed in the future.