The transactive energy movement has gained big headlines lately with blockchain-girded pilots and startups such as the Brooklyn Microgrid and the Ethereum Project. These efforts feature the ledger capabilities to enable transactions such as two-way flow and energy trading between customers. 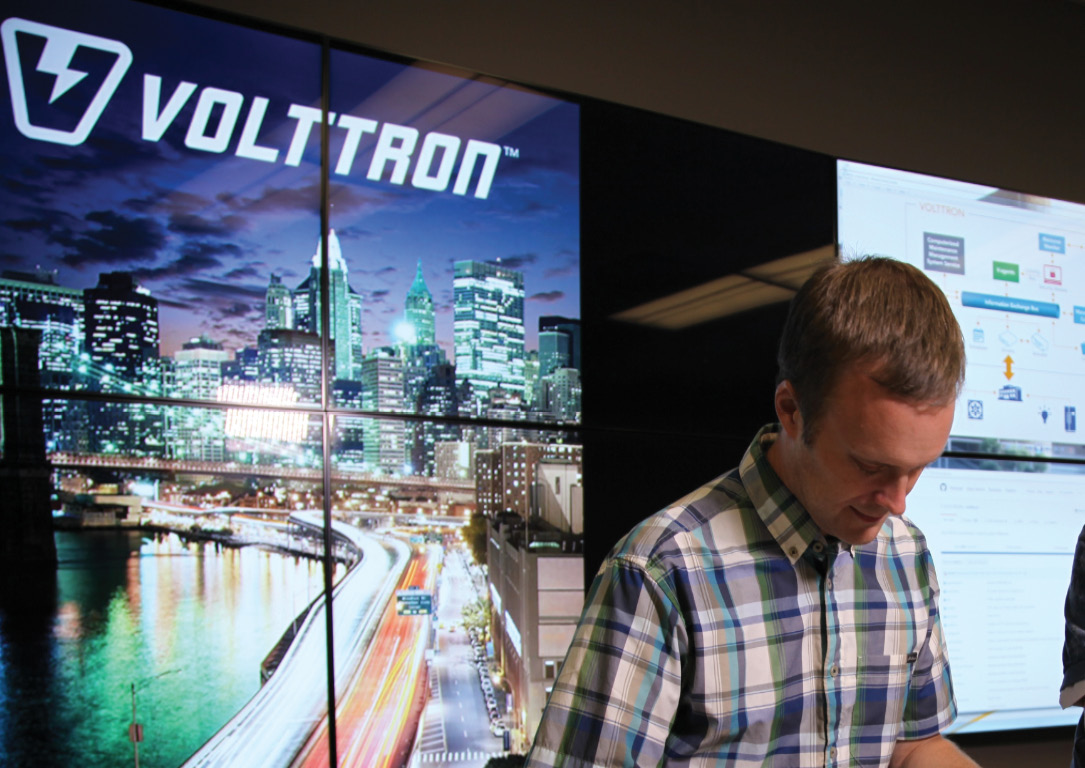 Pacific Northwest National Laboratory’s Jereme Haack is one of the developers of VOLTTRON, a distributed control and sensing software platform that’s enabling a number of transactive energy methods. (photo courtesy of PNNL)

Yet TLM still needs some TLC to mature correctly. It has a long way to go toward full-scale grid implementation while the grid powers-that-be work out customer engagement, infrastructure and security challenges. What the pilots have shown so far is that transactive load management may hold the power (or withhold it just enough) to minimize peak load impacts, doom unpopular time-of-use pricing and maybe even tackle the dreaded Duck Curve. Combining control technologies, device communications and demand response in new ways to shave building loads not only could change the paradigm on the grid, but also how the energy flow is timed and delivered.

Doug Houseman, who is grid modernization lead with Kansas City, Missouri-based engineering and consulting firm Burns & McDonnell, has predicted that the “industry paradigm of load following” will be flipped and reversed. Transactive load management will combine control technologies, device communications and demand response in new ways to revolutionize the methods and costs in how that electric energy flow is timed and delivered.

“Eventually, we have to flip the industry paradigm of “Ëœload following’ to “Ëœsupply following’. . . we have to get buildings to follow supply,” Houseman said. “The drivers will be 1) more variable resources; 2) increasing costs to back the renewables, including eventual carbon tax/cap and trade (and) storage costs, including losses; 3) device intelligence increasing out of the box; 4) cost control for C&I customers (and eventually for residential, too,); and 5) the need to coordinate pervasive renewables, such as California’s 100 percent net zero homes.”

The Richland, Washington-based PNNL has experimented with transactive load management tools on campus buildings over the past two years. PNNL and the U.S. Department of Energy together developed the VOLTTRON project that helps integrate building automation systems, thermostats and other devices.

“We have found that we can reduce the peak energy consumption by 15 percent without significantly affecting the comfort (typical raising set points by 1 to 2 degrees Fahrenheit above normal),” said Srinivas Katipamula, staff scientist at PNNL. “The reason this is possible is because the process coordinates when the flexible loads are on or off. More savings are possible if the comfort excursions are a bit more aggressive (such as more than two degrees Fahrenheit above normal).”

The PNNL experiments, working within its own facilities as well as collaborative efforts with Washington State University, Case Western Reserve and other institutions, is a large transactive research and development effort focused on achieving several goals. These include the aforementioned energy savings, while also allowing integration of renewables without impacting grid reliability. The transactive controls are at the center of it all, Katipamula noted, coordinating large numbers of distributed energy resources (DER) including flexible building loads, energy storage, smart inverters for solar photovoltaic and electric vehicles.

“The key outcome is to create a recipe of replication of transactive control and coordination for buildings, campuses, districts, utilities, municipalities and building owners,” he added.

Katipamula’s colleague at PNNL, principal engineer Steve Widergren, also is founding administrator with the GridWise Architecture Council, an industry effort to develop best practices for transactive energy and load management. Developing control mechanisms for both load and integration of DERs such as rooftop solar and storage, is the desired goal of grid engineers, Widergren noted. Centralized, direct control looks good on paper for those coordinating responses of devices and systems connected in the transactive links, but failure is always an option when control is centralized and further away from the grid’s edge.

“A more scalable approach is to delegate control to the local facilities where the DER resides,” said Widergren, who also is principal engineer with PNNL. “This can be scary for a grid engineer to consider, especially at the outset of DER integration where trust has not yet been established; however, with proper incentives, the delegate approach nurtures a partnering atmosphere that encourages the local entity to improve behavior beyond the level where the grid engineers could hope to achieve on their own.”

That shift will connect DER forecasts with risk management schemes, he added.

“An interesting aspect of transactive energy is that it brings together aspects of economic and control theory,” Widergren said. “Well-thought-out tools for risk management are regularly used in financial markets and hold promise in transactive energy systems, as well.”

Behavioral psychology might be another component. Burns & McDonnell’s Houseman is curious about how incentives—giving the customer some benefit for sacrificing comfort to moderate energy use at peak times—improve performance on load. Once deployed, he also sees it as a series of negotiations, albeit on a digital, automated level. The control system talks to the smart breaker panel, for instance, negotiating on what level of energy is allocated to the swimming pool at a certain time. Or a parent can program breakers to deal with the demand of a child who wants to play energy-draining online games at 3 a.m. , he noted.

Now that’s parental control. In fact, Houseman sees the potential for all kinds of new markets that can benefit from transactive energy, including highly-specific and responsive load management.

“In reality there is a hierarchy of markets—the building, the transformer, the circuit phase”the circuit, the (distribution) substation”the subtransmission tie, the transmission substation,” he said. “In short, retail markets—that are inclusive— will be 100 to 1,000 times as complex as the existing wholesale market. We will see the interested “Ëœprosumers’ (interactive customers) want to do this first and they will miss the physics of the grid in doing it.”

“My worry is that someone will mandate these markets using the wrong technology and with no understanding of the grid and its limits,” Houseman said. “We need to do this right. It is too important.”