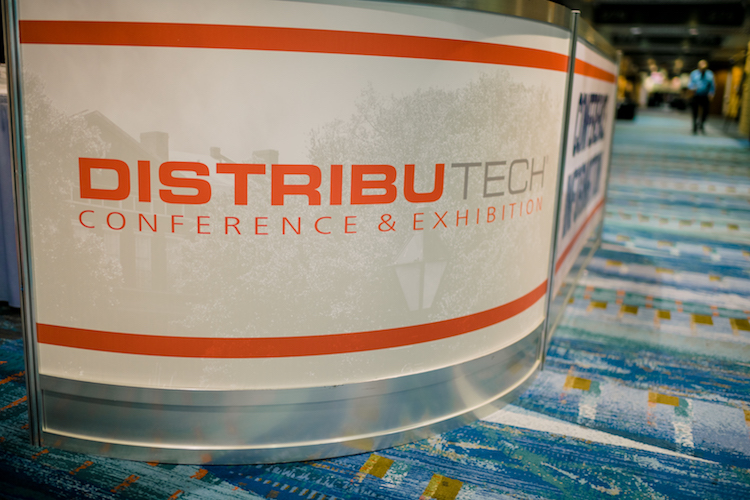 As more battery storage, solar, flexible load, EVs and other distributed energy resources (DERs) are added to the grid, researchers and analysts forecast that utilities will continue to increase the use of these resources to meet their load balancing and sustainability goals. In fact, a recent research report from Market Research Future predicts that the DER management market will grow at a CAGR of 16.50% from 2018 to 2023 as utilities install the systems needed to manage the complexities involved with integrating distributed energy resources into the world’s power grids.

As DERs continue to proliferate, so do the challenges associated with renewables intermittency, along with the new stressors added by DERs to an aging grid that wasn’t designed with two-way power flows in mind. As the platforms needed to manage a more DER-dominated grid, Distributed Resource Energy Management Systems (DERMS) and Virtual Power Plants (VPPs) provide the software needed to deal with these challenges and keep our electric grids in a state of reliable balance.

To measure and assess what utilities are planning and doing relative to the control and management of DERs, Enbala took advantage of the large number of utilities who attend the annual DistribuTECH conference and recently conducted what has become an annual survey of conference attendees. Enbala is the leading provider of VPP software and one of the top two providers of DERMS software, according to Navigant Research, and the company’s February survey marked the third consecutive year that the survey was conducted.

Utilities responding to this year’s survey were from IOUs (40%), municipal utilities or public power authorities (28%), energy service providers (ESPs) (22%) and co-ops (10%). This differs from the mix of respondent breakdowns for the 2018 and 2017 surveys. The variation is most likely due to the locations in which the conferences took place and the associated impact that geography has on attendance.  The 2018 event was in San Antonio, TX, and the 2017 DistribuTECH conference was in San Diego, CA. 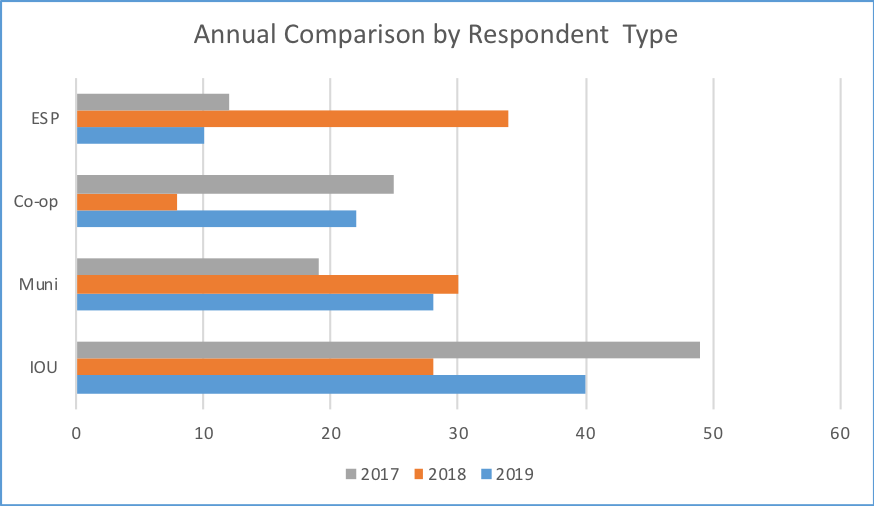 Some 49% of this year’s respondents were from utilities with more than one million customers – a percentage that is similar to last year’s percentage of 50%.  In 2017, on the other hand, 74% were from larger utilities. Again, the difference in the size of the utilities responding is likely a factor of the locations where the conferences were held each year and the specific utilities that were drawn to these locations. 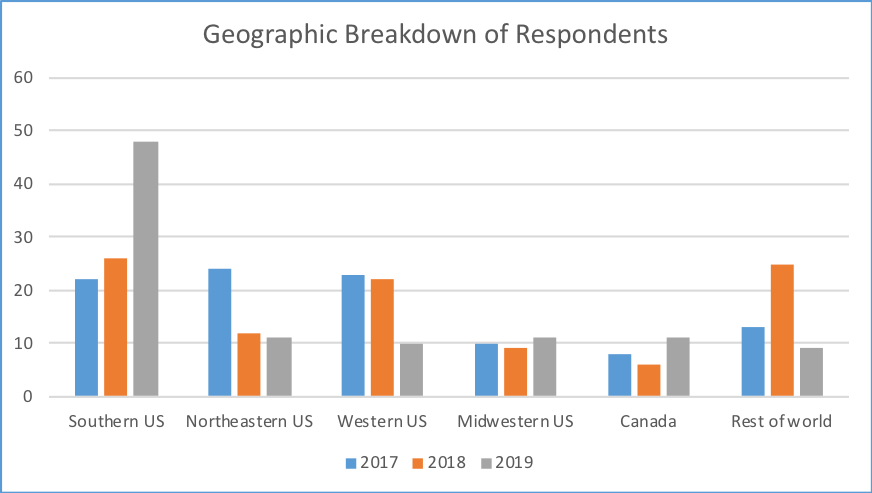 Some 25% of the respondents this year indicated that their organization had a Distributed Energy Resource Management Systems (DERMS) or Virtual Power Plant (VPP) platform in place, which is roughly the same percentage as last year.  In 2017, the percentage was 18%.  Of those who do not already have a platform in place, 64% said they’d be implementing one in the next 36 months. 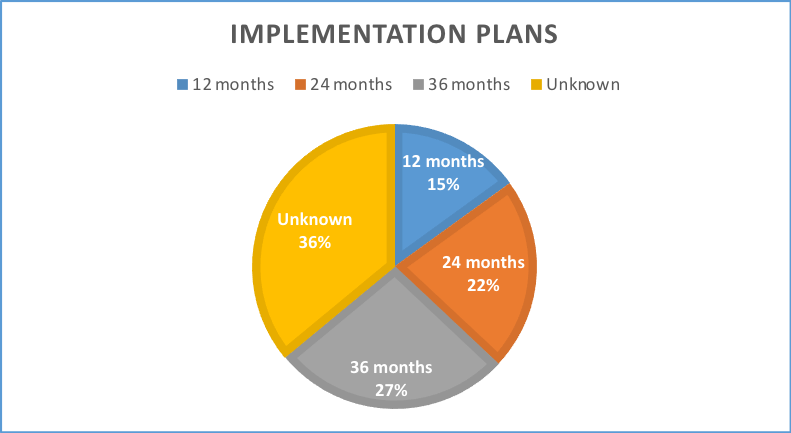 The DERs Being Controlled

Survey respondents were asked to specify what types of distributed energy resources they were connecting and controlling – or planned to connect and control.  Asked to select from among various types of DERS, many said they’d be controlling all the DERs listed in the survey.  Others indicated different combinations of DERs. (Responses add up to more than 100% because respondents were asked to select all the options that applied.) 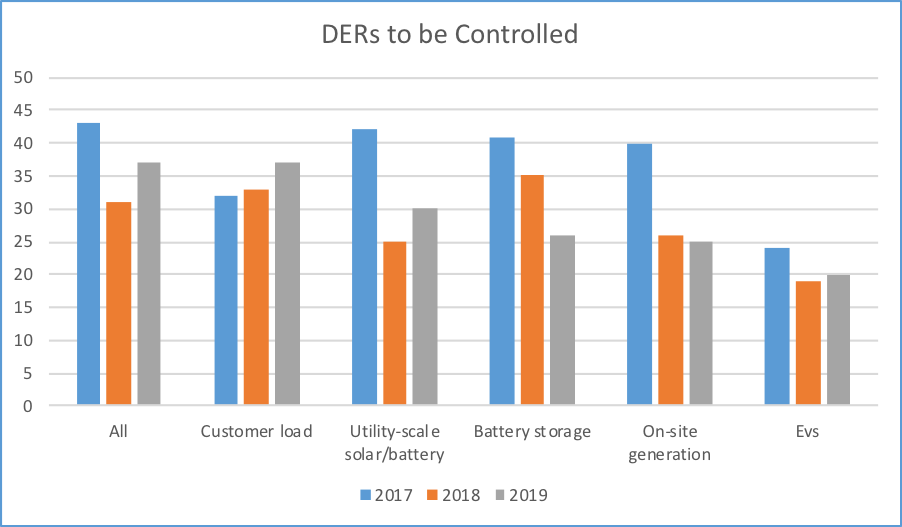 What’s Being Done With all Those DERs?

As previously noted, some 25% of the respondents have a VPP or DERMS platform in place to control and manage DERs. When asked about the programs for which these assets are being used, respondents name automated demand response and integrated energy efficiency as the top two applications.  This is consistent with the results from the previous two years, though 2019 showed a decrease in respondents saying they had DERMs pilots underway, dropping from 52% in 2018 to 38% this year. 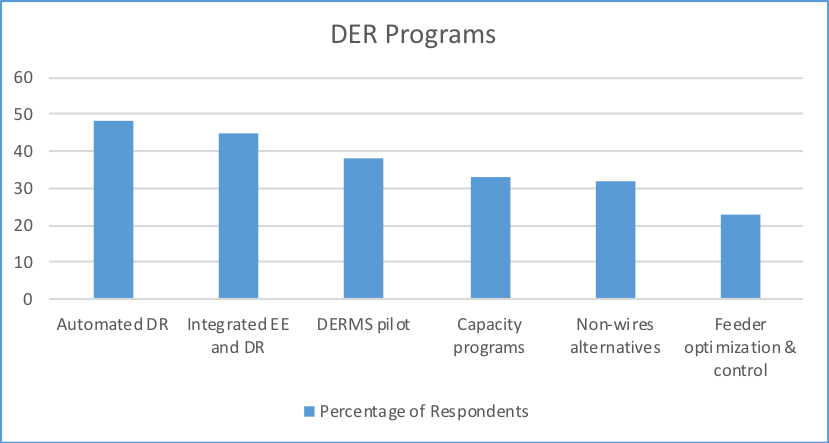 There’s no question that utilities are continuing to expand their reliance on DERs, but it’s also clear that there are still obstacles to be overcome.  When queried about what obstacles have been encountered in expanding the use of DERs, not much has changed in terms of what these concerns are.   As in 2018 and 2017, cost and regulatory issues topped the list of the two biggest challenges that must be faced, with 60% citing regulatory challenges as their biggest obstacle, and 61% indicating that cost or financial constraints were the leading challenge when it come to their ability to deploy VPP or DERMS solutions.

Compared to previous years, the following chart depicts how survey respondents ranked the primary obstacles they are facing on a scale of one to five, with five being the biggest obstacle. 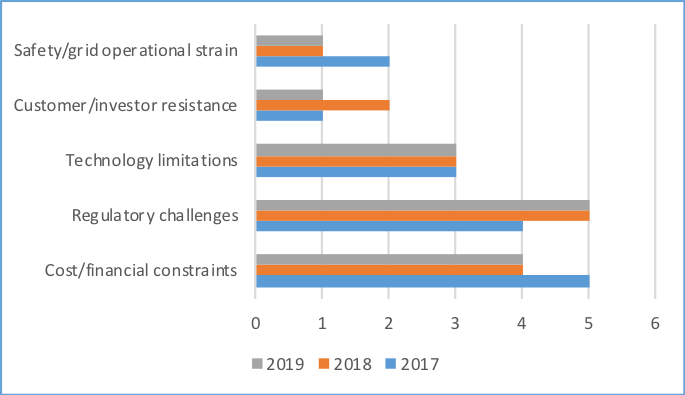 There are many compelling reasons to invest in distributed energy assets and the technologies that control and manage them. Chief among them for the last three years are meeting grid reliability concerns and sustainability/carbon reduction. Some 61% of the survey respondents this year said grid reliability was their primary investment driver, followed by 48% who cited sustainability goals and 47% focused on increasing opportunities for customer choice. These drivers are closely aligned to results from 2018 and 2017.  Addressing declining electric supply was ranked highly this year as an investment driver, with 38% of the respondents saying it was a key reason to invest.   This is higher than reflected in the survey results for the previous two years. 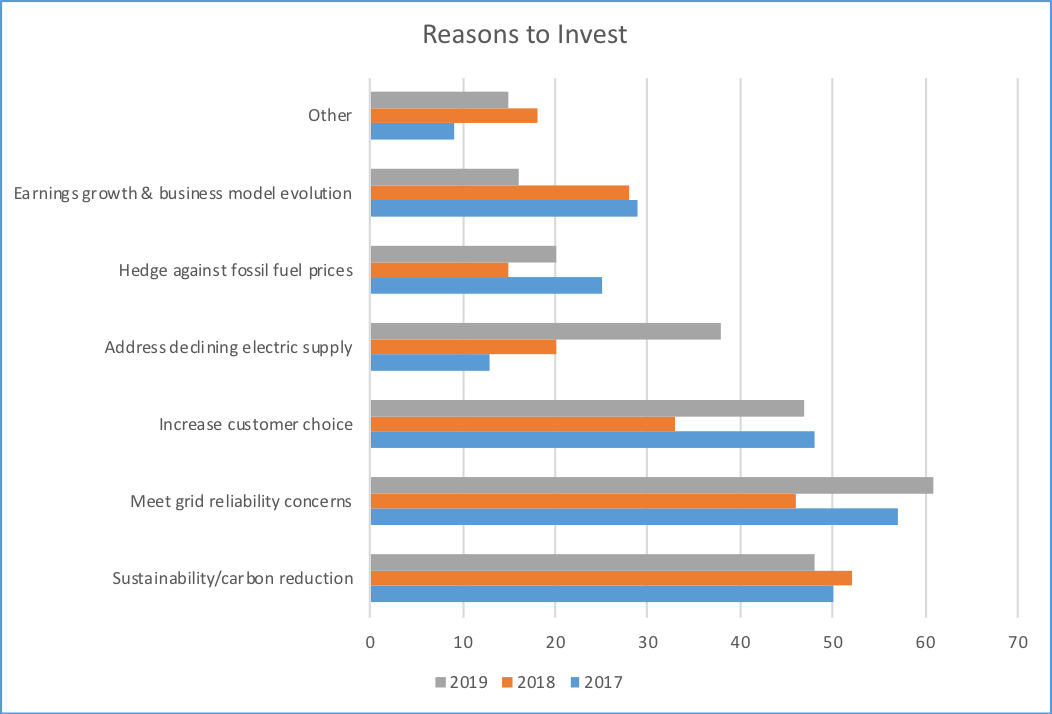 As utilities refine the criteria for what they regard as a successful DERMS or VPP solution, speed and reliability remain as the top two most important system selection factors.   Accuracy isn’t far behind, followed by flexibility in operations.  The 2019 results align with 2018 and 2017 results, with speed and reliability topping the selection criteria list for three years in a row. 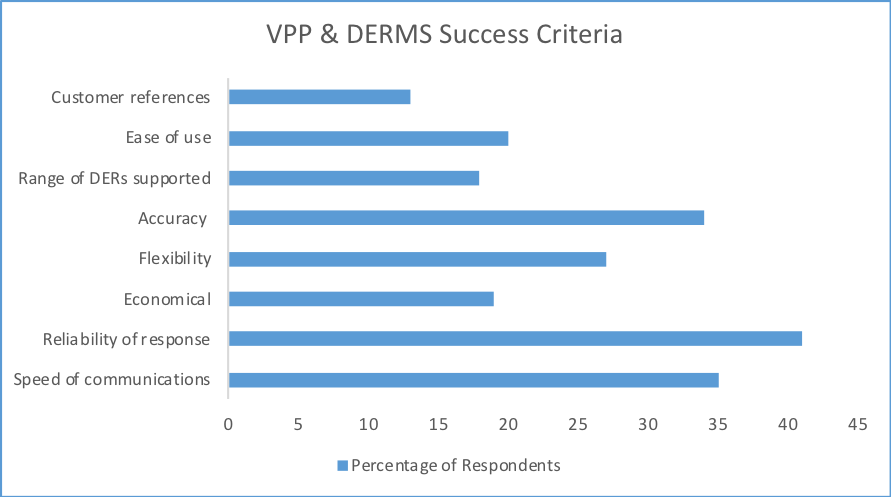 Navigant Research estimates that new capacity deployments of distributed energy resources are now outpacing deployments of new centralized generation capacity.  This denotes a pivotal tipping point in the energy market – one characterized by a disruption that brings with it opportunities and challenges.   This year’s survey shows that utilities are well-aware of both.  One fourth of the respondents have already implemented DERMS or VPP platforms to control DERs, and another 64% plan to deploy the technology in the next few years.   As utilities continue to interconnect DERs to the grid in a quest for a cleaner, more reliable, customer-friendly power system, the implications are large, and the decisions that must be made are many.  What do you think it will take to transform the traditional power grid to a move distributed energy grid? In 2020, we’ll take another look at how the distributed energy market progresses over the course of the next year.