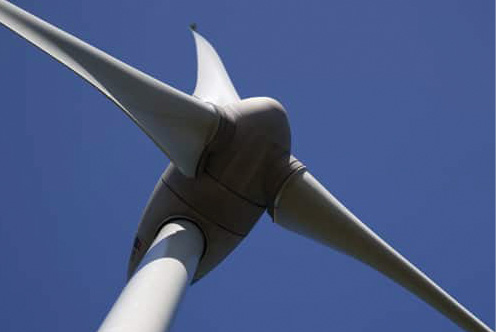 Around the globe, power demand continues to increase exponentially. To meet this demand, many countries are looking toward renewable energy to supplement, or even replace, their current methods of power generation. At the forefront of any renewable generation and integration discussion lies wind energy. Its availability, competitive costs, maturing supply chain and minimal environmental impact have led to its emergence as one of the fastest growing new sources of electricity.

Canada has regularly ranked among the top 10 countries worldwide for new wind power installations. In 2016, it ranked eighth globally for total installed capacity. High-quality wind resources are plentiful across Canada and, wind energy production meets about 6 percent of the country’s current electricity demand.

With the abundance of the resource and the cost-competitiveness of the technology wind energy capacity in the country has expanded at an average annual growth of 18 percent over the course of the past five years. According to data from the National Energy Board, wind energy has also been the largest source of new electricity generation capacity in the country for the last decade and is poised to continue its growth in the years to come as Canada takes steps to meet its target of 90 percent non-emitting electricity by 2030 and continues its shift to a low-carbon economy. Adding to its allure, wind energy is already Canada’s most cost-competitive source of new electricity generation alongside natural gas. And unlike natural gas, it is not impacted by carbon prices or commodity price fluctuations, and so will only become more affordable over time.

While the clean-energy source is readily available, and the wind market in Canada appears to be on the verge of steady growth in several regions, other factors must be assessed when considering the viability of higher penetrations of wind energy into the grid. To assess the operational and economic implications of integrating large amounts of wind energy into the Canadian electricity system, the Canadian Wind Energy Association (CanWEA) enlisted GE’s Energy Consulting group to conduct the Pan-Canadian Wind Integration Study (PCWIS).

About the PCWIS Study: Methodology

As we evolve toward a more diverse and complex power system, it becomes increasingly more essential for system operators to understand how grid modernizations and alternative generation sources may alter traditional grid dynamics and overall operability. Enter renewable integration studies such as the PCWIS. While wind integration studies can be completed on systems of varying sizes and complexities, when issues are considered on a regional or national basis, opportunities for greater penetration and more cost-effective integration are often enhanced. By completing a deep dive into current grid infrastructure and modeling of how the system will respond to various increases in renewable penetrations under different future scenarios, recommendations can be made as to how much wind energy can be reliably integrated onto an electricity grid, and what impacts there may be on transmission, system-wide production costs, imports and exports, and changes in greenhouse gas emissions.

The PCWIS was conducted to determine exactly this type of information. The primary goals of the study were to develop an understanding of the operational implications of how variable wind energy resources would affect Canada’s existing and future electricity grid, and to provide insight for utilities and policymakers into what environmental and economic costs and benefits may be associated with integrating large amounts of wind energy into the system across the country. The study also aimed to develop a consistent database of chronological wind data for potential wind sites across Canada.

Co-funded by CanWEA and Natural Resources Canada(NRCan)—through the ecoEnergy Innovation Initiative (ecoEII)—the Pan-Canadian Wind Integration Study modelled power grids in Canada and the United States under four scenarios, with Canadian wind penetration levels ranging from 5 percent to 35 percent of forecast annual system load energy in 2025. Because the power grids represented in this study are extremely large and complex systems that cover most of North America, the underlying model included representation of both the entire Eastern Interconnection and the Western Interconnection. The four scenarios examined included:

For the study, more than 54,000 potential grid-cells—point locations and hypothetical wind energy development sites in the Canadian domain collocated with a numerical weather prediction (NWP) grid points—were identified. Modeled wind data was produced by Environment Canada and Climate Change through a separately-funded ecoEII project. Each of the identified cells represented 4 square kilometers with a presumed maximum capacity rating of 16 MW. From there, potential wind energy development sites were selected, and the corresponding cells within each site footprint were combined into individual utility-scale wind power plants. This set the baseline to achieve the penetration levels desired for each scenario to be examined. Firm capacity also was included in the study to ensure reserve margin targets of each province could be met across all scenarios in 2025. The study also embedded sufficient transmission expansion to keep congestion at reasonable levels and to account for energy imports and exports to neighboring provinces and to the United States.

Numerous other parameters were included in the overall analysis to assess their influence on Canada’s wind integration capabilities. For example, the study looked at factors such as:

Prior to the PCWIS, there had never been a country-wide system-level evaluation of wind power integration in Canada. The groundbreaking study found that Canada can get more than one-third of its electricity from wind energy without compromising grid reliability and while also reducing emissions and generating new export opportunities, assuming adequate transmission is built, and operating reserves are maintained. The evaluation concluded that 20 percent and 35 percent wind penetrations can be achieved reliably and efficiently by 2025. The highest wind penetration scenario considered in the study was 35 percent wind penetration, however, it does not necessarily represent the upper limit on reliable wind penetration in Canada.

The PCWIS helps provide valuable insights into the long-standing industry question of how to successfully integrate more wind energy into the Canadian grid. Because this was a national study (and in some instances international—with power exchange with the U.S. included in the model), provincial governments across Canada are now better-positioned to ensure their individual renewable integration decisions, and projects are data-driven and align with the country’s holistic renewable energy strategy.

Environmentally, PCWIS showed that as more wind energy is added to the Canadian grid, conventional generation relying on fossil fuels will be displaced, leading to reductions in energy-related emissions. For example, at 35 percent wind penetration, Canada could realize CO2 reductions of more than 32 million metric tons. This substantial change could go a long way in helping Canada and North America meet clean energy targets for the future and encourage expanded, country-wide commitments to reduce greenhouse gases.

The study also found increased renewable penetrations could result in numerous economic benefits. While there would be the expected upfront capital investment to add more wind energy and transmission to the Canadian energy mix, operational savings and the potential to export excess generation could offset startup costs. (Tthe study did not quantify the capital cost of wind generation, becasue it was focused on operational impacts of higher penetration of wind energy.) The study demonstrated that the value of transmission reinforcement increases with wind penetration, and operating cost savings in all of North America (U.S. and Canada) from the transmission reinforcements would be substantial. For example, under the 35 percent TRGT scenario, the additional transmission capacity costs of CAD $3.7 billion (US $2.9 billion) could be offset by a CAD $1.5 billion (US $1.2 billion) annual reduction in system-wide production costs—enabling upfront costs of new transmission to be repaid in less than three years.

Another potential economic benefit could emerge from wind energy displacing thermal generation operational costs. For example, compared to the 5 percent BAU scenario, the 35 percent TRGT scenario could result in savings of approximately CAD $3.5 billion (US $2.7 billion) per year. Avoided production costs could also result in value of about CAN $47/MWh (US $36.50/MWh) in the 35 percent TRGT scenario when compared to the 5 percent BAU scenario.

The PCWIS also looked at complementary energy possibilities, such as more flexible operation of hydro resources. Canada is unique in that it has several hydro-rich provinces. The study found that combining flexible operation of hydro resources with increased wind generation could further mitigate variability of wind generation and in accuracy in wind forecasting, and amplify the benefits of renewables within Canada and unlock even more opportunities to increase exports to the U.S.

The data also provided valuable insights into potential challenges that may arise and where there may be opportunities to pursue to help in overcoming such challenges. Examples include:

Outlook for the Future

Canada, like many countries, is taking steps to decarbonize its economy and produce more clean energy from renewable sources. Increased wind penetration will contribute significantly to this transition. The country has world-class wind energy resources, yet is just scratching the surface of its clean wind energy potential. With the PCWIS findings in hand, it’s easy to see how wind energy can play an increased role in the Canadian energy mix going forward.

Learn more about the PCWIS and dive deeper into its findings at http://canwea.ca/wind-integration-study/.

Thomas Levy is senior wind energy engineer with CanmetENERGY-Ottawa, leading NRCan’s R&D efforts in wind energy, focusing primarily on integration issues and cold climate considerations. He is a Professional Engineer, licensed in the Province of Ontario, with over 15 years’ experience in environmental engineering, and over 12 years’ of progressive experience in the wind industry.

Robert Hornung has been president of the Canadian Wind Energy Association (CanWEA) since August 2003. He represents the interests of CanWEA members who are Canada’s wind energy leaders. Prior to joining CanWEA, Mr. Hornung worked for nine years with the Pembina Institute, an environmental research and advocacy organization specializing in energy and environment issues. He is also a Board Member of the Global Wind Energy Council.