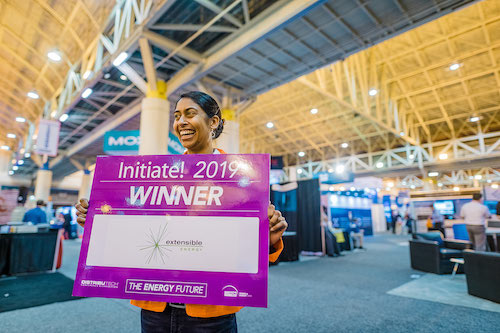 In an effort to promote innovation in the utility industry and showcase some of the new companies that are developing innovative energy delivery solutions, in 2019 DISTRIBUTECH International launched Initiate!

Initiate! is DISTRIBUTECH International’s test bed for start-ups, students and young professionals. At the 2019 event in February, twelve start-up companies participated, which meant they were given the opportunity to exhibit at the event and pitch their companies to a panel of 11 highly esteemed judges who represented all facets of energy delivery.

Three of those companies were selected as “winners” but all were impressive. We wanted to know how their companies had evolved over the last 8 months, so we asked them.

Here’s a rundown of where they are now.

George Koutitas, co-founder of Gridmates, which provides a technology platform that helps utilities digitize their low-income and social responsibility programs, said that his company has continued its collaboration with U.S. and EU electric utilities to help engage, retain and cultivate a community of energy donors with smart energy donations. In addition, he said there has been a new collaboration with one of the largest utilities in the EU through which Gridmates will provide technology for peer-to-peer transactions between positive energy communities.

“Finally, in collaboration with a well know energy firm, Gridmates has participated in RFPs to help U.S. utilities revamp their bill assistance programs and increase donor engagement,” he said.

Killian Tobin, CEO of Omega Grid, reported that his company was selected by the city of Sacramento, California to participate in a blockchain-based incentive program for electric vehicle drivers who charge their cars with solar energy. According to an article first published by the Energy News Network and republished by Renewable Energy World, the pilot project will offer blockchain-based “tokens” for charging vehicles when there’s a surplus of solar power on the local grid. The value will fluctuate based on the amount of solar being produced within a specific substation. Omega Grid is providing the software to track customer’s tokens via its digital ledger.

Tobin also said the company was recently selected as finalists for the QBE Ashoka urban resiliency challenge and the NYC BigApps competition.

Steve Lichtin of GoElectric reported that his company was acquired by in June by Saft, a French battery company that is owned by energy giant Total. In the press release announcing the acquisition, Philippe Sauquet, President of Gas, Renewables and Power at Total said that the acquisition “is an important step in Saft’s strategy to accelerate the growth of its energy storage systems business: Saft is now able to expand its scope of expertise from battery design and manufacture to the deployment of integrated turnkey distributed renewable energy storage solutions that connect customer sites to the grid.”

She said the company is wrapping up implementation with Navopache Electric Cooperative in Arizona, which is using the company’s solution to manage its substation assets and improve efficiency, accuracy and safety.

“We continue to work a variety of municipalities, cooperatives and testing labs and are breaking into new verticals in the electric and mechanical space,” she added.

Eli Lipman, VP of R&D for Brenmiller Energy reported that his company has finalized the installation, commissioning and testing of its 4-MWhth Energy Storage Demo unit in Israel. The unit is charged with grid electricity and supplies dry or wet steam on demand. Testing included validations for the main parameters of capacity, output stability, charging and discharging time and thermal loss. Lipman explained with the demo now operating according to specifications, the product is now at TRL level of 6 to 7. Product files and manufacturing procedures are also now finalized.

In addition, the company is working in multiple market segments suitable for the developed high temperature thermal energy storage including: a power-to-heat application in Brazil; a cogeneration application in partnership with NYPA, which supplies hot water in a local district heating scheme at SUNY Purchase college; a partnership with a European utility that will use its technology to increase the flexibility of a CCGT plant to compete in a daily supply market, which is strongly affected by the renewable energy penetration; and a large project in Israel where storage will be charged with PV and will return electricity to the grid through a turbine cycle, on demand.

“The feedback on business narratives and use cases that we explored while at DISTRIBUTECH 2019 continue to provide value to our thinking and practices as we serve our customers; it was timely dialogue with multiple levels of the marketplace that only a large venue can provide,” he said.

“Relationships begun through conversations at DISTRIBUTECH 2019 continue to produce value for DTI as these new applications are explored and solutions are produced for customers.  We look forward to future conferences to enhance and deepen our marketplace knowledge and relationships,” he added.

Scott Engstrom, VP of Corporate Strategy and Business Development at GridX said that the company won “Supplier of the Year” from Arizona Public Service (APS) in April; and that a Consumers Energy revamped customer portal powered by GridX’s billing analytics engine went live in May and September. He added the company expanded by hiring new executives including VP of Product Management, VP of Retail Energy Services, and VP of Sales.  Total staff has increased from 45 to 85, he added.

“We are particularly excited to be expanding our footprint in Michigan and beginning work for a large utility on the East Coast that will be rolling out Time-of-Use pilots to its customers in 2020,” he said.

According to the Twitter feed of Anax Power, which creates a letdown generator for use in natural gas pipelines that allows pipeline owners to generate electricity from excess pressure, the company has been busy pitching in startup competitions all over the country. Anax participated in the Northeast Cleantech Open (and won!) and presented at the 2019 American Gas Association Operations Conference. The company participated in the Green Seeds Networking Event in New York; New York Energy Week and pitched at the Plug and Play event in San Francisco.

Anax Power is also a finalist for the POWERGEN International Initiate! program.

POWERGRID International was unable to make contact with representatives from Logical Buildings, Sabreez or Pathion, the other three Initiate! participants, before press time.