Western Australia (WA) is the largest state in Australia, occupying the entire western third of the continent. WA has some 2.3 million residents (around 10 percent of the national total), and most live in the capital, Perth.

The electricity network in WA, one of the largest and most isolated networks in the world, is owned and operated by Western Power.

The Western Power Network covers 253,038 square kilometres and supplies electricity to more than 1 million customers. Unlike the series of interconnected networks that cover all other major urban areas in Australia, Western Power’s network is isolated and self-contained. Network customers’ electricity needs must be delivered by the system itself without any outside support or backup.

Western Power, like many network operators across the globe, is challenged with ensuring its infrastructure has the capacity to meet increasing residential peak demand. Peak demand strains Western Power’s electricity network; the top 15 percent of electricity supplied is used only 1 percent of the time.

With average summer temperatures of 31 C (88 F) and sustained maximums of above 40 C (104 F), residential air conditioner use in Perth has increased from 45 percent of households in 1999 to more than nine out of 10 in 2012. The continuing uptake of refrigerated air conditioner systems, in particular during the past 10 to 15 years, is recognized as a key driver of increasing WA’ s electricity peak demand.

To address this issue, Western Power is investigating innovative ways to benefit customers and defer network infrastructure investment via its smart grid.

“Western Power is focusing on the development of product and service offerings to save customers money over the longer term by operating the network more efficiently,” said Mike Davidson, Western Power’s smart grid development manager.

Installing more than 11,000 smart meters and associated communications infrastructure as part of its Smart Grid Foundation Trial provided Western Power with the technology platform design and number of network trials to deliver customer-focused products and services.

“Providing customers with choice and the opportunity to benefit was the core objective of our Smart Grid Foundation Trial,” Davidson said.

The primary objectives of the ACT trial were to:

1. Confirm a measurable and controllable demand reduction could be achieved;
2. Understand customer response and quantify customer benefits;
3. Validate the use of smart metering infrastructure as a valid means of managing residential demand response;
4. Determine the potential for using demand response to defer network investment; and
5. Determine cost and scale implications of a widespread rollout.

The trial used custom demand response enabling devices (DREDs), which were installed in participants’ air conditioners. Western Power controlled the DREDs by sending signals to the smart meters via a home-area network. 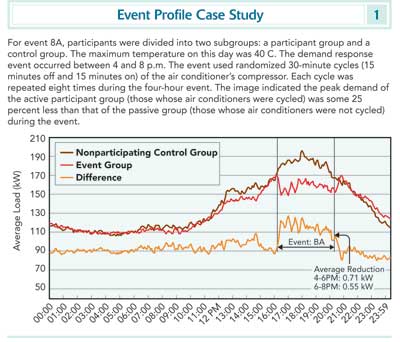 Year one of the trial (2011) was designed to test the technology and back-office systems to prove functionality. Year one testing was deemed successful, so the main focus of the trial in year two (2012) proceeded and was designed to coincide with residential peak demand (4-7 p.m. on the hottest days of the year) and to understand the customer experience.

Seven hundred eighty-eight customers volunteered to join the trial, with 377 meeting the selection criteria (based on air conditioner type and size) and participating, receiving an incentive payment of $200 for two years.

Ten demand response events were run from December 2011 to March 2012 from 4-7 p.m. on weekdays when the maximum daily temperature was higher than 35 C (95 F) after several preceding hot days. During an event, participants’ air conditioners were controlled remotely by communications signals sent by Western Power via smart meters and home-area networks. The signal would command each air conditioner’s compressor to cycle on and off while the fan continued running, minimizing customer discomfort. The compressor was cycled in combinations such as 15 minutes on and off, 10 off 20 on, or 20 off 10 on. Customers were not advised before the events.

Results show significant network benefits. Electricity consumption for participating households fell by an average of 0.9 kW per participant during trial events, which equates to 33 percent of the average air conditioner load.

Results from the trial were modeled to better understand the potential impacts of implementing similar programs across Western Power’s network.

“The results indicate that reducing the electrical load of air conditioners during times of high demand has the capacity to reduce system peak, as well as the potential to have an even greater impact on local feeders that are constrained due to residential peak,” Davidson said.

The customer experience was very favorable, according to Western Power research.

Around half of customers reported a sustained reduction in the use of air conditioners as a result of the trial.

“Sixty-six percent of participants reported an increasing awareness of their daily energy usage and the adoption of energy saving behaviors,” Davidson said. “We saw this result as a great added benefit of the trial.”

Using the positive results from the trial, Western Power plans to look for other opportunities to effectively reduce peak demand in similar ways. If used more widely, these kinds of programs might present a viable alternative to investing in costly new infrastructure.

Feedback from industry has been positive, with the trial named runner-up in POWERGRID International’s Project of the Year Awards in February 2013. 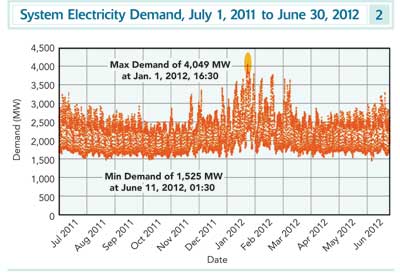 “Western Power was honored to be acknowledged on the international stage,” Davidson said. “We are proud of the work we are delivering in Australia, in particular the strong, mutually beneficial relationships we are building with our customers.”

“The Western Power trial is the first of its kind in Australia and provides perhaps the nation’s first illustration of what the intelligent networks of the future may look like, particularly in regard to demand response,” Paterson said.

Through its Smart Grid Foundation Trial, Western Power has delivered customer programs such as ACT, as well as access to real-time electricity use data via an in-home display and voluntary time-of-use tariffs. These programs have provided mutual benefits to customers and the network operator by bridging the gap between network needs and customer wants. It is essential that customers are brought into the electricity supply chain to maximize return on investment, Davidson said.

“Customers have long been a passive recipient in the electricity supply chain,” he said. “Without fostering community participation through education-based community engagement, the successful deployment of new technologies to drive network efficiency will be compromised.

“The balance of power is shifting toward customers. Utilities who do not deliver customers with choice and the opportunity to benefit will be unable to maximize their investment.”

Because of the success of the trial, Western Power will consider how this technology can be deployed cost-effectively and focus on areas of the network that are constrained or becoming constrained because of air conditioning-driven residential peak.