For 85 years, residents of Kansas, Missouri and beyond have gathered on Thanksgiving night for the annual Country Club Plaza Lighting Ceremony in Kansas City to watch thousands of lights mark the holiday season.

In 2012, more than 200,000 people attended, and more than 200,000 watched on TV and online. Many Kansas City Power & Light (KCP&L) customers travel with their families every year to participate in the lighting ceremony. KCP&L considers the ceremony a great community event. Since 2000, the utility has joined the festivities through its corporate sponsorship.

Headquartered in Kansas City, Mo., KCP&L is a full-service energy provider and resource in the Midwest. The investor-owned utility serves more than 800,000 customers in 47 northwestern Missouri and eastern Kansas counties–some 18,000 square miles. KCP&L seeks to improve life in the communities it serves. Throughout the year, the utility supports the community and encourages employees to get involved. The Plaza Lights, as it’s commonly called, is a perfect way to culminate and celebrate the contributions KCP&L employees make each year.

The Plaza Lights provide KCP&L with an opportunity to tell a story and reach customers at a place where they are already having conversations. Each year, as a corporate naming sponsor of the event, KCP&L seeks to achieve three main objectives:

During the past 12 years, KCP&L has employed multiple communication techniques to reach its audience, including television commercials and printed collateral. In 2011, however, the utility launched a successful social media pilot that became one of its most effective communication tools. The goal was to build awareness of the Plaza Lights sponsorship and to reach customers throughout the holiday season with company-related content ranging from energy efficiency to company initiatives. 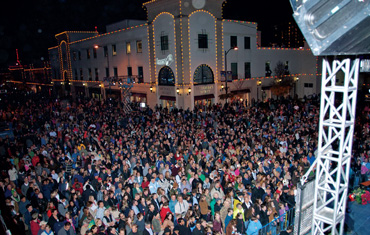 Prior to the KCP&L Plaza Lights campaign, the company did not have a robust social media presence. KCP&L wanted to learn from the trial run to add Facebook or Twitter to its social media tools. A successful pilot was important to secure internal buy in to support the idea of social media. After receiving buy in, the utility created plans for Facebook and Twitter accounts. In October 2011, a KCP&L Plaza Lights Facebook page and Twitter feed was launched. The following year, it added Foursquare.

The social media content was broken into three categories: giveaways, visual storytelling and leveraging key community partnerships. By putting messages into categories, KCP&L reached its audience with different channels and expanded its outreach and impact.

KCP&L wanted to reward its audience for their energy-related knowledge. The utility posted trivia questions, and the first person to answer correctly won a prize related to the Plaza. These incentives led to sustained post-ceremony engagement and a continued relationship with followers.

Like any social media campaign, visual storytelling through pictures and videos is engaging content. To engage followers, KCP&L posted staff pictures of the Plaza Lighting Ceremony and the Plaza Lights and encouraged followers to do the same. The photos included scenery shots of the Plaza Lights’ being switched on, audience reactions, fireworks and snow falling on the Plaza Lights. On average, Facebook posts that contained a photo received 33 likes, three shares and two comments. Nonvisual posts averaged 19 likes, two comments and no shares. 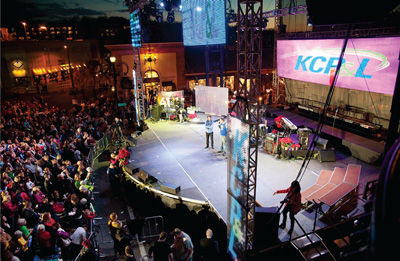 The final piece of the social media messaging strategy was leveraging community partnerships done two ways: by choosing appropriate charitable organizations to support and by partnering with the organization to flip the switch at the lighting ceremony.

Since 2011, KCP&L has partnered with The Salvation Army and Project Warmth, a local organization that seeks to keep those in need warm during winter. KCP&L also featured Dollar-Aide, a KCP&L program that helps families pay utility bills during financially challenging times. Donations from the public help fund the program. During the Plaza Lights season, KCP&L matched every dollar donated with a dollar energy credit. The utility encouraged Facebook followers to like photos and, in turn, KCP&L would donate $1 to charity for every like. The utility raised more than $1,500 using this tactic. Charitable tweets and posts accumulated 1,510 likes, 116 shares and five comments. 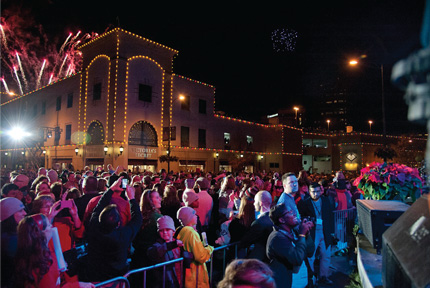 Every year, one prominent Kansas City person or organization is asked to flip the switch at the Plaza Lighting Ceremony to officially start the holiday season. In 2012, Sporting KC, Kansas City’s Major League Soccer team, was selected. The team has more than 46,000 followers on Twitter and more than 68,000 likes on Facebook. In addition to charitable partnerships, Sporting KC’s social media following presented KCP&L with an opportunity it had not experienced with previous switch flippers. Partnering with Sporting KC led to their mentioning the utility’s Twitter handle and Facebook page four times each week leading up to the ceremony. This grew the utility’s audience and reach and taught the value of having a trusted third party tell the KCP&L story on social media. This has been a lesson for this campaign and corporate social media.

Since launching the campaign in 2011, the KCP&L Plaza Lights Facebook page has more than 5,400 likes and 400 comments. On Twitter, KCP&L has more than 150 followers with more than 300 people engaging the utility through responses, retweets and mentions.

The KCP&L Plaza Lights social media efforts offered the utility a strong case study on what would work on its corporate Facebook page. It provided a unique perspective on how to reach customers. Instead of starting with corporate presence, the utility provided a place for customers to have a conversation with KCP&L. Customers want to talk about energy efficiency, but they want to do so through contests, photos, videos and key community partners they support.

During winter 2012, KCP&L launched its corporate Facebook page, www.facebook.com/KCPLConnect, and the KCP&L Plaza Lights campaign continues to provide valuable insight into what customers are interested in and how they want to receive information. Through capitalizing on key lessons from KCP&L Plaza Lights, the utility sees increasing engagement on its corporate social media presence.

Courtney Hughley is the manager of media communications at Kansas City Power & Light, where she manages media relations, including social media strategy, creates and pitches story ideas to the media and works with media outlets on company-related media inquiries. Reach her at 816-556-2414 or courtney.hughley@kcpl.com