Smart, connected, Internet of Things (IoT), adaptive and LED street lighting projects are being implemented in cities around the world and across the U.S., including Chicago, Los Angeles, New York, and even those as small as Conway, Arkansas. Whether called connected street lighting or street light management (SLM), the use case has a large business case benefit for smart city and smart grid programs. Street lighting is one of a city’s largest non-labor operating expenses. A growing number of cities and utilities are implementing SLM to save money, enhance safety, increase efficiency and even create versatile platforms for multiple uses. SLM projects include significant social benefits such as reduced light pollution, a substantial decrease in greenhouse gases and added security. New programs focus on street lights as the optimum IoT location for sensing and control platforms beyond SLM.

Many credit Acuity Brands for having started the SLM market in 2007. The U.S. Department of Energy’s (DOE) and others’ estimates vary but, generally, reveal that about 45 million street lights are operating in the U.S. Market adoption estimates vary depending on the source and range from under 5 percent up to 20 percent. Recent supplier interviews indicate there are many SLM pilots, but only a few operators have fully implemented SLM. Implemented programs range from a few thousand street lights to a new project that involves more than 500,000 luminaires.

Smart street lighting market maturity resembles automatic meter reading circa 2002. At that time, utilities used one-way networks, van drive-by systems and even short-range handheld units to collect usage date from customers’ meters. The perceived value of interval data, which required adding sensors and communications equipment to electricity meters, was very basic until 2002. It was then that PPL Electric Utilities, Allentown, Pennsylvania, implemented the industry’s first smart meter program with two-way communications for interval data, controls and additional enhanced functionality for 1.4 million electricity meters. Confusion about smart metering’s business case, however, still exists. This is evident by the fact that in 2015 only 65 million of the 151 million electricity meters in the U.S. were smart meters with over half of those funded by the DOE’s American Recovery and Reinvestment Act grants.

The industry’s structure adds to business case complexity and slows adoption. Stree lights can be owned or rented and cities often buy street lighting as a service with electricity bundled into one fee. The industry is adding metering to SLM capabilities to meet utilities’ needs to pass on the energy savings to cities. Some cities are buying their stree lights from the electric utility to implement LED luminaires and SLM to maximize their total annual savings.

At its simplest, a SLM system involves a controller mounted on top of the luminaire, a two-way communication network and a software application. SLM controllers can manage street light on-off and adaptive lighting, report day burners, measure electricity used and much more. The Illuminating Engineering Society of North America (IESNA) modified its standards to allow adaptive lighting that can reduce illumination if traffic conditions warrant, particularly during quiet night time. SLM controllers can be equipped with proximity sensors, which enable a street light to increase its output if a pedestrian or car comes into range. ANSI C136 positions the SLM controller as a sensor platform with data terminal connections.

Many suppliers offer standards based SLM solutions for communication networks, adaptive lighting and metering. Examples of SLM system suppliers include outdoor lighting companies, including Acuity Brands, Eaton and Phillips, and SLM only suppliers like DimOnOff and Telensa. After a decade of slow SLM market acceptance, its adoption is gaining traction. The entry of smart grid suppliers into the SLM market is increasing its adoption by public power and investor-owned utilities, which are adding it to smart grid or smart meter programs. Elster, Itron and Landis+Gyr, among others, offer communication networks to support smart metering for SLM; electric, water and gas metering; distribution automation and more. With its acquisition of Silver Spring Networks, Itron is poised to be a strong force in shaping the SLM market. In April of this year, after a hotly contested request for proposal, the city of Chicago awarded a program to implement SLM for 270,000 luminaires.

The potential of selling hundreds of millions of IoT enabled SLM controllers around the world has drawn the attention of multiple low power wide-area network (LPWAN) suppliers. In the U.S., carriers like Comcast entered the IoT marketplace by joining the global LoRa Alliance and its 500 plus members. LoRa Alliance is an open, non-profit association of members who believe that the IoT era is now. It promotes LoRaWAN, which is a LPWAN specification intended for wireless battery operated “things” in a regional, national or global network. LoRaWAN is benefiting from a wave of adopters including utilities and suppliers like Cisco and IBM, as well as smart grid firms. LoRaWAN as a Service (LaaS) supplier Senet already offers coverage in 225 cities. Most market experts project LoRaWAN will capture 45 percent to 55 percent of the IoT market.

LoRaWAN is likely to become a significant solution in the U.S. for LPWAN smart city and smart grid uses. LoRaWAN is especially interesting because its technical strengths support long-range communication at low cost for either mobile or fixed network uses. LoRaWAN systems can be purchased for private network use or through a service provider like Comcast. Mueller Systems sells solutions for mobile and network advanced metering infrastructure (AMI) while Neptune sells its AMI solution as a package involving Verizon’s Network as a Service offering using LoRaWAN or narrow band IoT (NB-IoT) LPWAN options.

For cities that own and operate their own street lights, possibly also water meters, a SLM network provides the perfect platform for a city’s transportation and water departments to collaborate and minimize total costs. LoRaWAN’s standard includes physical attributes and crucially the communication protocol. This allows cities and utilities to implement a private or LaaS LoRaWAN capability knowing any certified LoRaWAN product is interoperable with the network. They can buy smart meters, meter interface units, SLM controllers, environmental monitors, waste collection trackers, etc. from their preferred suppliers. This simplifies the modernization process because individual departments can continue to operate autonomously if they wish with minimal need to collaborate with others.

Carrier LPWAN solutions including NB-IoT, LTE category M1, and other support the same pick and play flexibility but with a network access fee. Carrier monthly fees have historically hindered widespread adoption of their solutions for applications including AMI, SLM and others with similar value, performance and risk profile. Carriers are market testing monthly fees to determine which markets and applications best fit their business needs.

The connection between street lighting and smart cities provides not only an attractive business case but a platform for long-term evolution for additional uses. In fact, if a city or utility has an idea for a sensor, a street light pole can be a pretty useful place to mount it. Creative ideas are rapidly coming to market for new uses for street light platforms. Cities have streets and streets have street lights for the most part. “Current Powered by GE” offers a platform oriented vision to address SLM with an enhanced version involving video cameras, gunshot detection, license plate identification and more. ShotSpotter’s gunshot origin detection system was tested in Richmond, California, before being implemented in 2015. Illuminating Concepts has integrated emergency management capabilities into its Intellistreets SLM system. Intellistreets offers embedded call buttons for hands free first responders communication. It can even sequence lights and send announcements on emergency evacuation routing. Panasonic’s CityWIDE management portal provides integrated monitoring and control supporting smart city applications.

Many SLM business cases have combined the LED conversion with SLM implementation to minimize installation costs. There are many presentations and articles documenting the projected up to 50 percent reduction in energy costs, potentially more with adaptive dimming, and additional operating savings. The payback period has decreased steadily since 2012, driven by significant price reductions for LED luminaires and SLM controllers and increasing business case understanding. Recent projects demonstrate simple payback periods well under 10 years.

While the potential of creating a viable business case has improved, privately owned networks might have a long-term cost advantage over carrier based systems. Table 1 provides a basic overview of different IoT networks with a desirability heatmap from a smart city and smart grid view reflecting multiple variables including lifecycle cost. 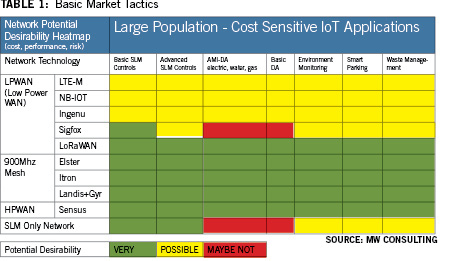 SLM only suppliers may face increasing market challenges. Recent investor-owned and public power utilities’ smart grid programs, including ComEd, ConEd, FPL and others, reveal that about 50 percent of the market is not suited to SLM only suppliers. If carriers’ LPWAN solutions’ business terms meet utility smart grid and smart city needs then the desirability heatmap can change significantly. This could be especially true if traditional smart grid suppliers do not sustain standards and interoperability efforts. 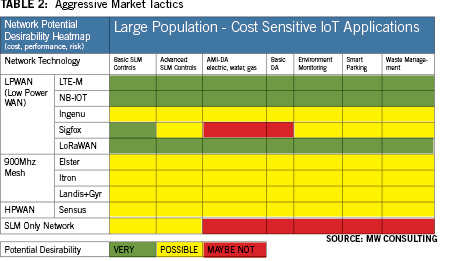 Street light operators need to be careful of generic IoT network analyses. There are significant differences between the functional and cost expectations of application devices. Supporting a security camera requires IoT networks with high data rates, low latency and generally, high cost. This can be acceptable because of the small volume of these devices. The business case for cost sensitive applications like SLM may not support the CapEx and OpEx lifecycle costs of carrier based systems.

There are multiple SLM solutions from credible suppliers. SLM’s pioneering phase is over and being an early adopter is manageable with the correct lighting specifier knowledge, network technology expertise, RFP process and documentation. The keys to SLM project approval are the business case and Total Lifecycle Value modeling. The many line item benefits beyond simple on-off control are common regardless of technology. The lifecycle costs, including potential carrier network fees must be identified and documented to quantify each solution’s Total Lifecycle Cost. Modeling SLM benefits and costs is a new and complex task for most street lighting departments, just as it was for electric utilities and AMI in 2002. There are viable benefit models and groups with the experience to help cities and utilities document a complete and accurate view of SLM’s value.

The next time you’re driving, look at the street lights and know that they are a major part of your smart city, smart grid and smart water program. It’s time to capture the significant value that SLM offers. | PGI

Michael Wiebe, president of MW Consulting, has supported SLM and smart IoT grid-pipes programs in 15 countries involving over 100 million endpoints. He served on the Municipal Solid-State Lighting Consortium’s Controls Subcommittee and was involved in the standards process. He is currently supporting three SLM programs. Reach him at mwiebe@mwconsultingcorp.com.

Henry Zywotkiewicz, director of customer engineered solutions at MW Consulting, supports cities and utilities as a specifier in streetlighting design, procurement and commissioning. He holds an IESNA Edwin F. Guth Award for Excellence in Lighting Design and one of his solutions is recommended in the IESNA RP-6 Standard. Zywotkiewicz has a bachelor’s degree in electrical engineering and Lighting Certified and LEED AP credentials. Reach him at hzywot@mwconsultingcorp.com.