At the turn of the century, the National Academy of Engineering listed the 20 greatest achievements of the 20th century. Electrification was No. 1.

Since the first electricity was delivered to 59 residents of Lower Manhattan, New York, in 1880, it has been changing lives.

Today’s modern society has become so intertwined with electric power that even a brief service interruption can wreak havoc. One of the most important and abundant pieces of electric grid equipment is the transformer. Transformers are key to delivering reliable, affordable and safe electricity, and as they age, proper monitoring and maintenance becomes increasingly important.

The Department of Energy (DOE) estimates that the U.S. bulk electric grid consists of some 390,000 miles of transmission lines that connect to more than 6,000 power plants. This bulk grid includes the largest installed base of extra-large power transformers (>345 kV) in the world-about 2,000. In addition, although the DOE doesn’t know the total number of large power transformers (115 kV – 230 kV or a capacity rating of 100 MVA or more) installed in the U.S. bulk grid, it reports that tens of thousands are installed on high- and medium-voltage transmission lines across the country (see Figure 1). 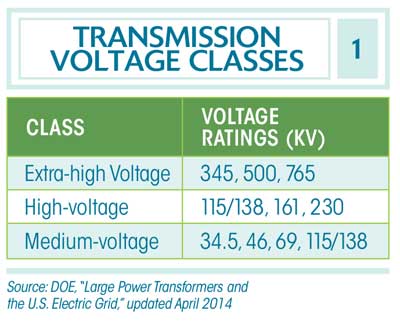 “The question on number of transformers is a complex one,” said Brad Arnold, a senior business analyst at Doble Engineering.

The real area of interest in transformers is large power transformers, which are almost exclusively in the transmission network. The best statistics out there are based on the number of transmission substations, which house more than one transformer in a single location, Arnold said.

“In the U.S., the number of transmission substations was estimated to be around 15,700 in 2009, according to a variety of sources, including DOE reports,” Arnold said. “Based on our analysis of substation data, there are roughly two to three transformers per transmission substation. Using those numbers to estimate the number of transformers gives a range of 31,000 to 47,000 transformers. Roughly 40 percent of those would fall into the size of greater than 100 MVA, according to the analysis of FERC (Federal Energy Regulatory Commission) data that I have. So that equates to about 12,000 to 19,000 large power transformers.”

Depending on its location in the system, one failed transformer can result in an outage and potentially millions of dollars of lost revenue for electricity users, as well as large expenses for electric utilities. Replacement costs for large power transformers can range from $1 million to $7.5 million, according to the DOE’s “Large Power Transformers and the U.S. Electric Grid” report updated April 2014 (see Figure 2). In addition, lead times on large power transformers commonly range from six to 16 months. 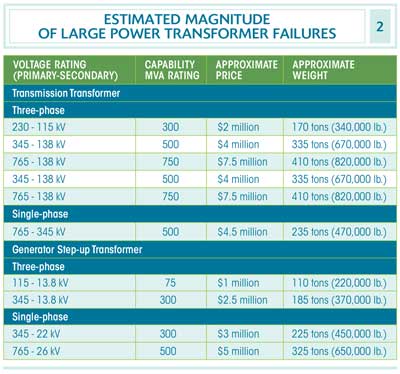 These statistics show why an effective transformer monitoring and maintenance program is important.

Much of the current transmission infrastructure was built from the late 1950s to the 1970s.

“During that time, transformer maintenance was not as important as it is today because existing transformers were replaced or new ones were installed as systems were built out,” said Don Angell, vice president of global strategies and solutions at Doble Engineering.

In the 1980s, infrastructure growth slowed considerably, transformers were seldom replaced and they began to age on the system. This is when maintenance became more important, Angell said.

Because most transformers are insulated and cooled with oil, transformer oil sample analysis has been a useful, predictive maintenance tool for many years. Oil quality testing, as well as dissolved gas analysis (DGA), is performed on insulating oil samples. DGA is useful because as electrical insulating materials and related components break down inside a transformer, they produce gases within the transformer. By identifying the generated gases, analysts can learn much about a transformer’s health and likelihood of failure.

During the past decade or two, a shift to more predictive or condition-based maintenance instead of strictly scheduled maintenance has been occurring, Angell said.

“Twenty to 30 years ago, transformers were taken offline, checked and maintained or repaired based on a schedule,” he said. “If you found the transformer was found to be in good shape, you had wasted your time and money.

“Today, utilities are trying to make smarter and more cost-effective decisions about when to conduct maintenance on a transformer. They don’t just do it based on schedule.”

Power and automation technologies company ABB defines the types of transformer maintenance on its website.

“Maintenance can be either time-based or condition-based, depending on the service strategy selected,” ABB states. “The time-based maintenance is carried out at predetermined intervals of time or on the base of prescribed criteria. It is aimed at reducing the probability of failure or the working deterioration of the transformer.”

Maintenance is based on a transformer’s performance, its main parameters for operation or both.

Risk-based and condition-based strategies can be preventive, consisting of regular inspections and maintenance (like retightening of gaskets) and predefined component replacements (like bushings), ABB’s website states.

Online remote monitoring and testing has improved utilities’ ability to increase transformer performance, reduce failure risks and cut maintenance costs. Online monitoring allows utilities to evaluate equipment status remotely and constantly, eliminating the need to send an engineer or technician to the site. This saves time and resources, detects changes in the operations and condition of a transformer immediately, and helps the utility maintain transformers based on actual performance and data, not just on a predetermined, periodic schedule. The information collected through online monitoring also allows utilities to identify transformers that might be on the brink of failure. Preventing the failure of one transformer can save millions of dollars (see Figure 2) and keep customers happy. As beneficial as it is to utilities’ transformer maintenance programs, online monitoring is not being installed at every utility and on every transformer.

“There are barriers to setting up online systems that monitor and test more than transformer gas and oil,” Angell said. “The main barrier is cost. Since 2008, when the economy took a downturn, many utilities haven’t been able to justify spending money on stepping up transformer maintenance to include new online testing.

Although many transformers on the bulk power grid are old, maintenance techniques and technologies are evolving, allowing utilities and other grid owners and operators to keep them performing well.

Transformer maintenance is a priority for utilities, Angell said.

“Most utilities have some sort of program to diligently maintain their transformers,” he said.