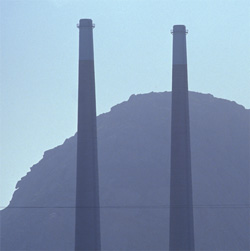 Coal-fired generation is under considerable pressure from tightening air pollution control standards and fuel-price competition from natural gas. During the past five years, the financial community has made clear it is unwilling to finance any new large-scale, coal-fired generating facilities.

An alternative to decommissioning old plants or constructing new ones is to retrofit an existing coal-fired or oil-fired plant to burn natural gas. This is not the most energy-efficient use of natural gas, but it might turn out to be the most economically feasible approach to clean up an existing coal fleet without investing hundreds of millions or even billions of dollars for back-end pollution control equipment. This is especially true for any plants in the East that still burn high-sulfur hard coal, have NOX compliance issues and expect heavy investments to meet National Emission Standards for Hazardous Air Pollutants (NESHAP) and Maximum Achievable Control Technology (MACT) compliance rules.

Economic and grid reliability analysis on a plant-by-plant basis reveals the situations where a gas-based retrofit would be feasible and a good investment if gas remains below $5 per million British thermal units. State utility commissions likely will be sympathetic to such retrofits for reasons including instantaneous clean-air compliance, a reduced carbon footprint and the avoidance of massive capital spending for new plant construction or back-end retrofits. Such projects typically come in $20 million to $50 million per unit, depending on size, proximity to gas supplies and site readiness. Compare this with the hundreds of millions to billion-plus dollars for the potential alternatives.

One consequence of such a gas-powered retrofit is that units’ undergoing this process will require re-rating, new source review and revalidation or relicensing by local, state and federal authorities. This provides an opportunity to circumvent all known arguments against making energy efficiency improvements within these plants. Such arguments include not having capital available to devote to energy efficiency improvements or an inability to achieve any return on investment because of cast-in-concrete obligations to ratepayers.

How so? First, energy efficiency improvements can be budgeted as part of the repowering project and typically would consume 1 to 3 percent of the overall capital required for the repowering. Second, as part of the legal redo for the facility, the expenditures and results of the energy efficiency improvements are rolled into the new costs and ratings for the plant. The utility can retain the significant return on investment from the minor additional expenditures on top of the costs of the fuel switch.

The following is a survey of candidate areas where utilities can reduce large parasitic and systemic power losses while adding substantially to the capacity of their existing fossil-fired generation fleet. This can buy utilities and grid operators substantial time while the direction of generation technology clarifies itself in the technical, political and economic arenas.

The Value of Implementing Efficiency Techniques

The typical coal-fired utility power plant has internal components that consume from 7 to 10 percent of gross MVA generation. The revenue of the plant relies almost entirely on the ability to deliver net megawatts to the grid and might be without financial compensation for reactive power delivery margins required by system dispatch. The internal consumption of power consists mainly of motor loads to drive high-powered fans and pumps for combustion and draft air supply, feedwater, condensate and cooling water or cooling air. But many other losses—large and small—add up, as well, robbing the plant of available efficiency and capacity. In a gas-fired retrofit, primary air fans, coal-handling and coal-pulverizing equipment no longer would be necessary. This would reduce auxiliary loads by at least 1 percent of total plant output.

As utilities continually have cut staff as a response to competition, among the first positions eliminated were the performance engineers who tracked the thermal and electrical performance of fleets unit by unit. Their efforts typically resulted in keeping facilities thermally tuned up and kept efficiencies up by 0.1 to 1.5 percent. Fuel cost variations and power price variations swamped out the value of any such small efficiency improvements. Consequently, however, serious losses in energy and water cycles crept in under the conditions of lowered scrutiny.

Traditional financial analysis for plant efficiency improvement design or retrofit projects does not include the true value of incremental improvements made available through judicious use of high-efficiency techniques.

The Breadth of Available Efficiency Improvements

Efficiency improvement programs can be implemented via several technologies, many available off the shelf from plant equipment suppliers, including:

Large motor efficiency improvements. A typical 600-MW fossil-fired power plant will have 10-15 large motors (5-25 MW) and a somewhat larger complement of medium-sized motors (0.1-5 MW), perhaps 15-25 units. In the design history of these motors as part of the plant, the original engineering spec for the motor power and torque ratings were increased to accommodate pump and fan performance margins, delivery performance guarantees and so forth. An application originally requiring a 2-MW motor operating at or near its best efficiency point (BEP) might have been “spec’d up” to a 3-MW or more and consequently will operate well away from its BEP and can dissipate 10 percent or more extra power than necessary to do its originally intended job. During a 40-year life of baseload operation, this precise situation would waste 56 GWh for just one such motor. Multiply that times the cost to produce those gigawatt-hours, or worse, the lost opportunity to sell them, and the cost of the motor is dwarfed by the cost of the energy it wastes.

Variable frequency drives (VFDs) for fans and pumps. The actual operating points for air and fluid pumping systems can be well below their design limits because of performance margins’ adding up during the design and procurement processes used when the plant was designed and constructed. Conversely, post-construction design changes such as back-end flue gas scrubbing might cause the originally specified equipment to be lacking in the necessary performance. In either case, a variable speed drive (VSD) can solve operability and controllability issues that arise in these scenarios in an energy-efficient manner.

A significant additional benefit from new VFD’s is the reduced downtime compared with first- and second-generation drives in many plants. A single avoided plant outage often can pay for a drive retrofit.

Capacity increases via power factor improvements. Unit power factors typically are set by dispatch at 0.80 to 0.90, depending on network load conditions. These represent capacity losses, as real MW power output is sacrificed to create MVAR support. A tighter range of 0.88 to 0.93 would be an improvement over the current range. This allows generating stations to shift MVAR (unsold) production to MW (sold), improving their net efficiency and revenue. Techniques and equipment exist to make this possible. Within the power station, auxiliary motors can be driven with variable speed drives that include front-end power electronics, which will improve the power factor found on the busses. This makes the station auxiliaries look like less of an inductive load and reduces the need for additional power factor compensation from the generator.

The survey of technology addresses the main efficiency losses from an electrical system standpoint. Other plant operational aspects can be addressed from an efficiency standpoint.

For the typical large hydrogen-cooled generator, the purity of the hydrogen is nominally maintained at 95 percent for safety. An improvement in purity to 98 to 99 percent will improve generator efficiency more than 0.1 percent. This simple, automated improvement can pay for itself in a few months on a large baseloaded plant.

Valves and steam traps that are not well-maintained and leak can add dozens of British thermal units to plant heat rates. The same is true of alternate feedwater heater drain leaks. Regular monitoring of valves, traps and drains with maintenance performed as needed to ensure proper operation is the standard approach to prevent these efficiency losses.

Finally, the compressed-air needs of a plant for instrumentation and other subsystems might consume far more air and power than necessary. An air-consumption audit and analysis can reveal how much air is being wasted and how much power is added to the parasitic load unnecessarily.

Greenfield sites are the best opportunities to use intelligent whole systems design approaches, which specify efficiency as a primary design objective, along with long-term reliability and minimized cost-of-operation and life cycle costs. The typical mistake made during new plant auxiliary system design is to go for the lowest capital cost without much regard to efficiency and operating and life cycle costs. Small incremental increases in design study effort and careful equipment sizing and selection can reap huge operational benefits. The bonus for getting the best results should be placed on the plant designer.

One way to ensure the most efficient plant design wins is to set specific efficiency targets for auxiliary systems, along with cost-benefit analysis, and enforce these as a metric during the bidding and design execution processes with an expressed de-emphasis of up-front capital costs. When plant operation begins over the full expected load range, auxiliary system efficiency testing should confirm the design expectations, and the engineering procurement and construction firm should be held contractually accountable for meeting those efficiency expectations, just as they are held accountable for the plant’s meeting its larger expectations of schedule, output capacity, gross and net heat rates, etc.

As world energy demand recovers, it continues to drive power generation projects into ever-expanding geographic regions and new areas of technology. The need to manage performance becomes increasingly important. If a generating station is audited from head-to-toe for potential efficiency improvements and an action list is prepared for efficiency improvement projects during a few major outages or one fuel-conversion retrofit, there are sizable potential low-hanging fruit ripe for the picking at the appropriate time. A comprehensive plan for efficiency improvements typically can yield multiple-percent output improvements at costs far lower than building new units. This helps the generation planning program for the fleet and can reduce or eliminate significant capital spending on new plant construction and all the issues and costs associated with bringing a new fossil-fired plant into operation.

Richard Vesel is global product manager for power generation energy efficiency with ABB’s power generation business and is based in Wickliffe, Ohio. Reach him at richard.w.vesel@us.abb.com.